Saturday of Lazarus: Anticipating resurrection of all righteous on Last Day

On the Saturday before Holy Week, the Orthodox Church commemorates a major feast of the year, the miracle of our Lord and Savior Jesus Christ when he raised Lazarus from the dead after he had lain in the grave four days.

Here, at the end of Great Lent and the forty days of fasting and penitence, the Church combines this celebration with that of Palm Sunday.

In triumph and joy, the Church bears witness to the power of Christ over death and exalts Him as King before entering the most solemn week of the year, one that leads the faithful in remembrance of His suffering and death and concludes with the great and glorious Feast of Pascha.

The story of the raising of Lazarus from the dead by Jesus Christ is found in the Gospel of John 11:1-45. Lazarus becomes ill, and his sisters, Mary and Martha send a message to Jesus stating, “Lord, he whom you love is ill.”

In response to the message, Jesus says, “This illness does not lead to death; rather it is for God’s glory, so that the Son of God may be glorified through it” (vv. 1-4).

Jesus did not immediately go to Bethany, the town where Lazarus lived with his sisters. Instead He remained in the place where He was staying for two more days.

After this time, He told his disciples that they were returning to Judea. The disciples immediately expressed their concern, stating that the Jews there had recently tried to stone Him (John 10:31).

After He said this, Jesus told his disciples that Lazarus had fallen asleep and that He was going there to wake him. The disciples wondered why He would go to wake Lazarus, since it was good for him to sleep if he was ill.

Jesus, however, was referring to the death of Lazarus, and thus told the disciples directly that Lazarus was dead (vv. 11-14).

When Jesus arrived at Bethany, Lazarus had already been in the tomb four days. Since Bethany was near Jerusalem, many of the Jews had come to console Mary and Martha.

When Martha heard that Jesus was approaching she went to meet Him and said to Him, “Lord, if you had been here, my brother would not have died. But even now I know that God will give you whatever you ask of Him.” Jesus told her that her brother will rise again.

Those who believe in me, even though they die, will live, and everyone who lives and believes in me will never die.” Jesus asked Martha if she believed this. She said to Him, “Yes, Lord, I believe that you are the Messiah, the Son of God, the one coming into the world” (vv. 17-27). 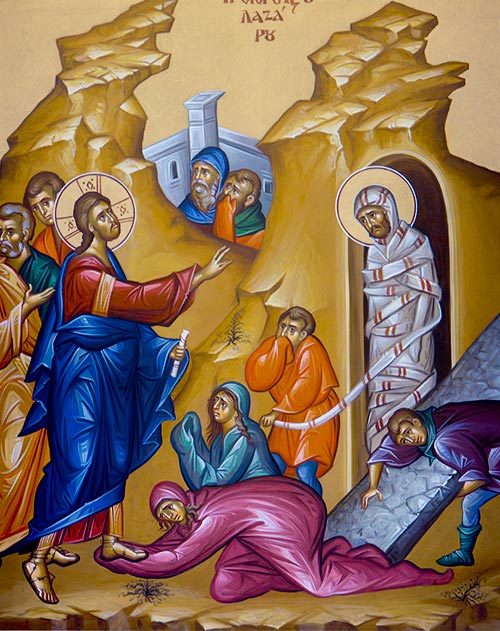 Martha returned to tell Mary that Jesus had come and was asking for her. Mary went to meet Him, and she was followed by those who were consoling her.

The mourners followed her thinking that she was going to the tomb to weep there. When she came to Jesus, she fell at His feet and said, “Lord, if you had been here, my brother would not have died.” Jesus saw her weeping and those who were with her, and He was deeply moved. He asked to be taken to the tomb of Lazarus.

As Jesus wept for Lazarus the Jews said, “See how He loved him.” Others wondered that if Jesus could open the eyes of the blind, He certainly could have kept Lazarus from dying (vv. 28-37).

Jesus came to the tomb and asked that the stone that covered the door be taken away. Martha remarked that Lazarus had now been in the tomb for four days and that there would be a stench.

Jesus replied, “Did I not tell you that if you believed, you would see the glory of God?” The stone was taken away, and Jesus looked toward heaven and said, “Father, I thank you for having heard me, but I have said this for the sake of the crowd standing here, so that they may believe that you sent me.” When He had said this, He called out with a loud voice, “Lazarus, come out!” Lazarus walked out of the tomb, bound with the strips of burial cloth, and Jesus said, “Unbind him, and let him go” (vv. 38-44).

As a result of this miracle, many of the Jews that were present believed in Jesus. Others went and told the Pharisees what Jesus had done.

In response the Pharisees and chief priests met and considered how they might arrest Him and put Him to death (v. 45ff).

This miracle is performed by Christ as a reassurance to His disciples before the coming Passion: they are to understand that, though He suffers and dies, yet He is Lord and Victor over death. The resurrection of Lazarus is a prophecy in the form of action.

It foreshadows Christ’s own Resurrection eight days later, and at the same time it anticipates the resurrection of all the righteous on the Last Day: Lazarus is “the saving first-fruits of the regeneration of the world.”

As the liturgical texts emphasize, the miracle at Bethany reveals the two natures of Christ the God-man. Christ asks where Lazarus is laid and weeps for him, and so He shows the fullness of His manhood, involving as it does human ignorance and genuine grief for a beloved friend.

Then, disclosing the fullness of His divine power, Christ raises Lazarus from the dead, even though his corpse has already begun to decompose and stink.

This double fullness of the Lord’s divinity and His humanity is to be kept in view throughout Holy Week, and above all on Good Friday. On the Cross we see a genuine human agony, both physical and mental, but we see more than this: we see not only suffering man but suffering God.

Icon of the Feast 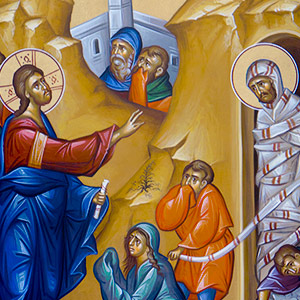 The icon of the Saturday of Lazarus shows Christ calling His friend to come out of the tomb. Lazarus is coming forth from the tomb, still bound in the strips of burial cloth.

His sisters, Mary and Martha are bowing before Christ, expressing both their sorrow in the death of their brother, but also their faith in Christ as the Messiah and Son of God.

Next to them is someone who has followed the request of our Lord and removed the stone from the door of the tomb.

Standing with Christ are his disciples who are witnesses of this miracle, a true manifestation of the power of God that would bring them assurance during the Passion of our Lord.

In the center of the icon is a person who represents the crowd who also witnessed the miracle. Some believed, but others went and told the Pharisees and chief priests who continued their machinations to bring about the arrest of Christ and His death.

The walled city of Jerusalem, where Christ will arrive in triumph the following day, is depicted in the background.

Orthodox Christian Celebration of the Saturday of Lazarus

The Saturday of Lazarus is celebrated with the Divine Liturgy of Saint John Chrysostom, which is preceded by the Matins service. On Friday before the feast, the Vespers is done either in conjunction with the Presanctified Liturgy or if this is not held, according to the order of the Triodion.

The day and commemoration receive its name from the miracle of Christ recorded in the Gospel. Both this feast and Palm Sunday are joyous festivals of the Church, and thus bright colors are used for vestments and the Holy Table.

At the Divine Liturgy of Lazarus Saturday, the baptismal verse from Galatians (“As many as have been baptized into Christ have put on Christ” Galatians 3:27) replaces the Thrice-Holy Hymn, thus indicating the resurrectional character of the celebration, and the fact that Lazarus Saturday was once among the few great baptismal days in the Orthodox Church Year.

Memory of the Holy Glorious Apostle and Evangelist John the Theologian

Memory of the Saint Nilus the Myrrh-gusher of Mount Athos