Russian backtracking in relation to Aspropyrgos “metochion” in Attica

The former Patriarchal Exarchate for Orthodox Parishes of the Russian Tradition in Western Europe, which recently joined the Moscow Patriarchate, deleted every reference from its official website to the “metochion” dedicated to the Dormition of the Theotokos in Aspropyrgos, where “Archimandrite Melchizedek,” also known as “Archbishop of Romania,” appeared to be the abbot, who stood by the side of Artemis Sorras during the oath-taking ceremonies.

After the outrage caused after the publication of orthodoxia.info, which indicated that the Moscow Patriarchate was preparing to intrude on the canonical territory of the Autocephalous Church of Greece through the “Archdiocese of Russian Orthodox churches in Western Europe,” as it is called today, by establishing a “metochion” in Aspropyrgos, every reference to this structure and “Abbot Archimandrite Melchizedek” has been deleted.

However, there are more surprising findings. Besides the “metochion” in Aspropyrgos, eight monasteries in Switzerland, Italy, Norway and Germany, which are under the spiritual guidance of Greek Archimandrite Dionysios Kalampokas, who has been facing charges under Greek canon law, has been removed from the list of the Archdiocese of Russian Orthodox churches.

Although Fr. Dionysios Kalampokas was not mentioned to be part of the Archdiocese of Russian Orthodox churches in the relevant posts, the monasteries were under his influence.

A monastery in Switzerland is at the top of the modified list, which has become an odd phenomenon: It is called “Monastère Saint-Jean-Capodistrias” and it is dedicated to Saint Ioannis Kapodistrias.

Last April, the Catholic website cath.ch published a feature on the two Orthodox monasteries with statements made by members of the brotherhoods and sisterhoods talking about their spiritual father, Archimandrite Dionysios, who is the head of 21 monasteries around the world.

The monastery of Saint Ioannis Kapodistrias also appears to be an association, but according to the reportage and photos published in the feature story, it is a monastery which seems to be mixed since the two communities, as stated, share a common table.

“The association ‘Saint Monastery John Capodistrias of Beinwil’ has its spiritual seat in a monastery on the Greek island of Zakynthos in the Ionian Sea. This is also where the spiritual father of the community, Archimandrite Dionysios, also lives, who is linked to the Patriarchate of Antioch, based in Damascus.” (The feature is available here in French).

While the nuns told cath.ch in April that their spiritual father belonged to the Patriarchate of Antioch but was based on Zakynthos, on another website called orthodoxie.ch, the monastery appears to be under the jurisdiction of the Archdiocese of the Moscow Patriarchate. 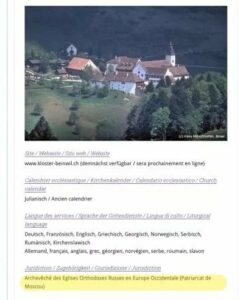 In fact, both the letterhead and the stamp, which appear in a timetable of the monastery published by the same website, speak clearly of the jurisdiction of the Moscow Patriarchate.

In the same letterhead, there is an icon of the “saint of politics” as Ioannis Kapodistrias is called, who has a halo and points his finger to the sky. 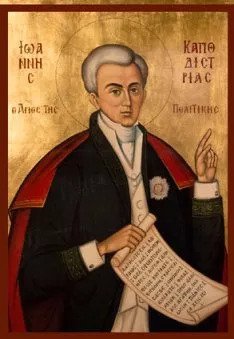 Communiqué by former Patriarchal Exarchate complicates matters rather than clarifying them