Pope Francis was received by the Archbishop of Cyprus

in Church of Cyprus, FrontPage

At 8.30 a.m. on Friday, December 3, Pope Francis, the 266th Pope of the Roman Catholic Church, arrived at the Holy Archdiocese of Cyprus.

Pope Francis was received by Archbishop Chrysostomos II of Cyprus. The Pope then greeted the attending members of the Holy Synod of the Church of Cyprus. This was followed by a private meeting between the Archbishop of Cyprus and the Pope at the Archdiocese’s office for about 20 minutes.

Then, in the presence of members of the Holy Synod, clergy of the Church of Cyprus, laypeople, Pope’s entourage, and journalists, Pope Francis went to the new Cathedral of Nicosia.

In the end there Archbishop Chrysostomos and Pope Francis exchanged gifts. 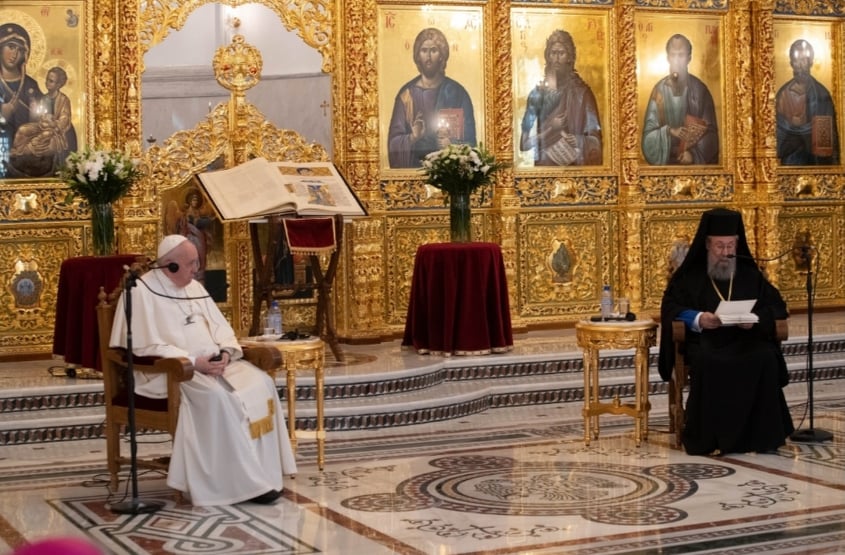 Archbishop of Cyprus warning to clergy: Either you get vaccinated or you leave

Archbishop of Cyprus received the third dose of COVID-19 vaccine

Polish President paid an official visit to Archbishop of Cyprus

Archbishop of Cyprus for Turkish reactions: Let them do whatever they want