Patriarch Theophilos of Jerusalem is the first Greek Orthodox primate to celebrate the Divine Liturgy with the Patriarch of Moscow, accepting that the name of the Ecumenical Patriarch will not be commemorated in the Diptychs.

The Patriarch of Jerusalem, ranking fourth of nine Patriarchs, who have been recently in Moscow in order to receive the Patriarch Alexy II Prize from the International Foundation for the Unity of Orthodox Christian Nations, celebrated today the Divine Liturgy with Patriarch Kirill of Moscow at the Cathedral of Christ the Savior in Moscow. This move will almost certainly arouse heated debate. 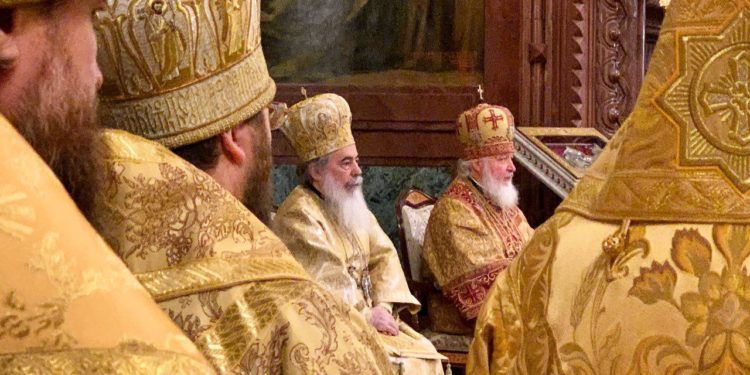 The Patriarchate of Jerusalem has not so far made any announcement about the visit of Patriarch Theophilos to Moscow, which, according to what has been published in Moscow, was made to receive the Patriarch Alexy II Prize.

However, sources with knowledge of the background noted that behind the prize there is an important agenda.

Ecumenical Patriarch: Right to religious belief is mother of many individual and social rights

Metropolitan of Philadelphia presided over Divine Liturgy in the Phanar (VIDEO)

Metropolitan of Philadelphia presided over Vespers in the Phanar (VIDEO)

The new General Secretary of BSEC in the Phanar

Patriarch of the Armenians in Turkey at the Ecumenical Patriarchate