Patriarchate of Jerusalem celebrated Feast of Universal Exaltation of Cross

On Monday, September 27, 2021, the Patriarchate of Jerusalem celebrated the feast of the Universal Exaltation of the Sacred and Life-giving Cross.

On this feast, the Church commemorates that after the consecration of the Church of the Holy Sepulchre the gathered crowd asked to see and venerated the Precious Cross and for this reason, the Archbishop of Jerusalem Saint Makarios and Saint Helen exalted the Cross to be seen by everyone.

Then all people exclaimed “Kyrie Eleison” many times. Ever since, this event was established to be celebrated one day after the anniversary of the consecration of the Church, namely, on 14th September.

For this event, Great Vespers with the formal incense procedure and the blessing of bread was officiated on Saturday afternoon at the Catholicon of the Church of the Resurrection by Patriarch Theophilos of Jerusalem with the co-celebration of Hagiotaphite Fathers.

On Sunday morning the Divine Liturgy was officiated at the Catholicon of the Church of the Holy Sepulchre by Patriarch Theophilos of Jerusalem with the co-celebration of Metropolitan Isychios of Kapitolias, the Archbishops, Aristarchos of Constantina, Methodios of Tabor, Theodosios of Sebastia, Demetrios of Lydda, Philoumenos of Pella, Aristovoulos of Madaba, Metropolitan Joachim of Helenoupolis, Hagiotaphite Hieromonks with first in rank Elder Kamarasis Archimandrite Nectarios, Archdeacon Mark and Hierodeacon Eulogios.

The chanting was delivered by Hierodeacon Simeon as the Service was attended by many people and the Consul General of Greece in Jerusalem Mr Evangelos Vlioras.

The Divine Liturgy was followed by the Procession from the Catholicon through the Holy Deposition to Saint Helen’s chapel. The Deacons offered incense there at the Holy Altar of the Armenians, and through the stairs of the chapel the Procession went down to the shrine of the finding of the Cross.

The Patriarch observed the Exaltation of the Holy Cross to the four points of the horizon according to the Typikon, while the Hagiotaphite awarded with officialia and the congregation awaited at Saint Helen’s chapel.

The Procession continued on the right from the Seven Pillars and went round the Holy Sepulchre three times.

Under the chanting for the troparia of the feast, the Holy Cross was venerated by the Patriarch, the Archbishops, the Consul General of Greece in Jerusalem, Evangelos Vlioras, and then the congregation, who also received basilic flowers for the sanctification of their houses, souls and bodies and to use for the making of the bread of Eucharist, instead of leaven, as witnessed by those who make this kind of bread.

From the Horrendous Golgotha the Patriarchal Entourage went down to the Altar of the Catholicon through the interior stairs and from there they marched to the Patriarchate Headquarters.

Therein, the Patriarch addressed those present as follows:

“Today the death that came toman through the eating of the tree is abolished through the Cross. For the curse of our first mother Eve fell on all mankind is destroyed by the fruit of the pure Mother of God, whom all the powers of Heaven magnify”, Saint Cosmas exclaims (Second troparion of katavasiae of the cross, ode 9).

The grace and power of the Sacred and Life-giving Cross have deemed us worthy to celebrate this year again Its Exaltation in the very place where It was found, and of course at the Horrendous Golgotha, with the celebration of the Patriarchal Divine Liturgy at the Church of the Holy Sepulchre.

The Holy Church of Christ honours especially the Holy Cross because, according to Saint John Damascene, “the Cross is a trophy of Christ, once it was placed, but forever it drives away the demons”.

In other words, the Holy Cross is a powerful symbol of the abolishment of the corruption of death. “By nothing else is death abolished, the forefather’s curse freed, death put to shame…. but by the Cross of our Lord Jesus Christ. Anything is made possible through the Cross”, Saint John Damascene says.

And according to Saint Paul, the Holy Cross is the incarnation of self-denial and utmost humility of Jesus Christ: “Who, being in the form of God, thought it not robbery to be equal with God: But made himself of no reputation, and took upon him the form of a servant, and was made in the likeness of men: And being found in fashion as a man, he humbled himself and became obedient unto death, even the death of the cross” (Phil. 2:6-8).

Just as through the wood of the first-created couple’s disobedience “through envy of the devil came death into the world: and they that do hold of his side do find it” (Wisdom of Solomon 2:24), likewise, through the wood of obedience, namely the Cross, the eternal life in Christ through His boundless philanthropy came to the world.

“I am the resurrection, and the life: he that believeth in me, though he were dead, yet shall he live” (John 11:25) the Lord says. “Christ being raised from the dead dieth no more; death hath no more dominion over him” (Romans 6:9), Saint Paul preaches.

And according to Saint Cyril of Alexandria, Christ’s death in the flesh made the source of the renewal to immortality and the newness of life for us men.

The greatness of our Saviour Christ and the incomprehensible divine mystery of the Cross is clearly expressed by Saint Paul in his letter to the Colossians with the words: “For it pleased the Father that in him should all fulness dwell; And, having made peace through the blood of his cross, by him to reconcile all things unto himself; by him, I say, whether they be things in earth, or things in heaven” (Col. 1:19-20).

“O Cross save us by thy power; sanctify us with thy brightness, O precious Cross, and make us strong by thine Exaltation; for thou hast been given unto us as the light and salvation of our souls” (Entreaty, troparion 7). Amen! Many happy returns!” 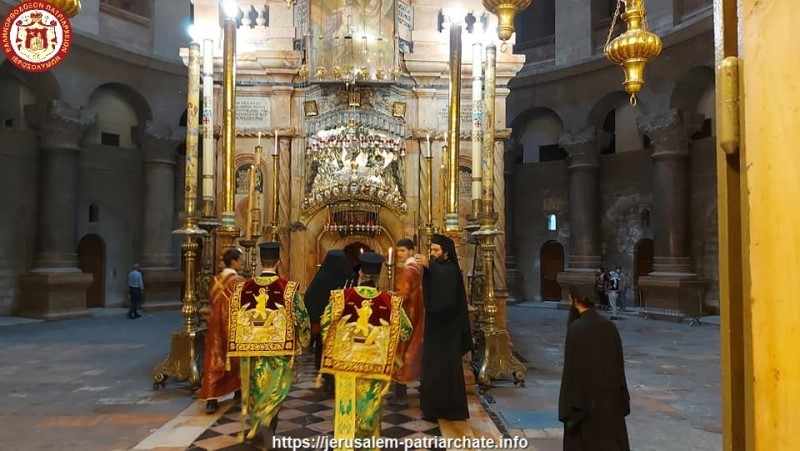 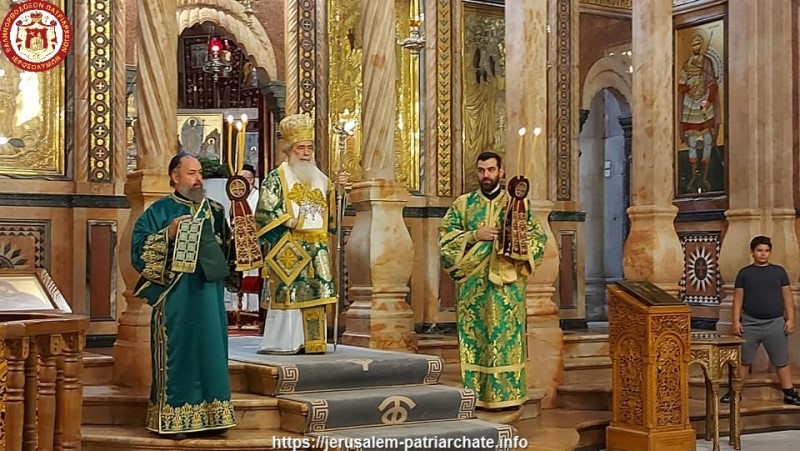 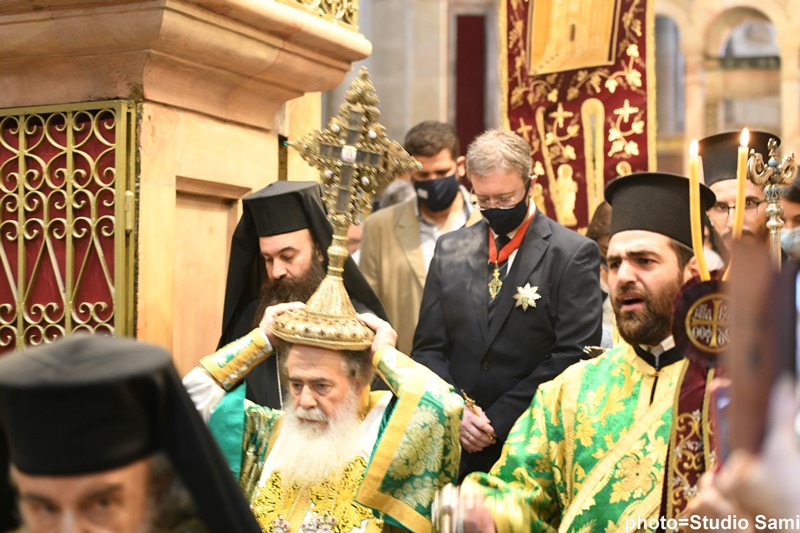 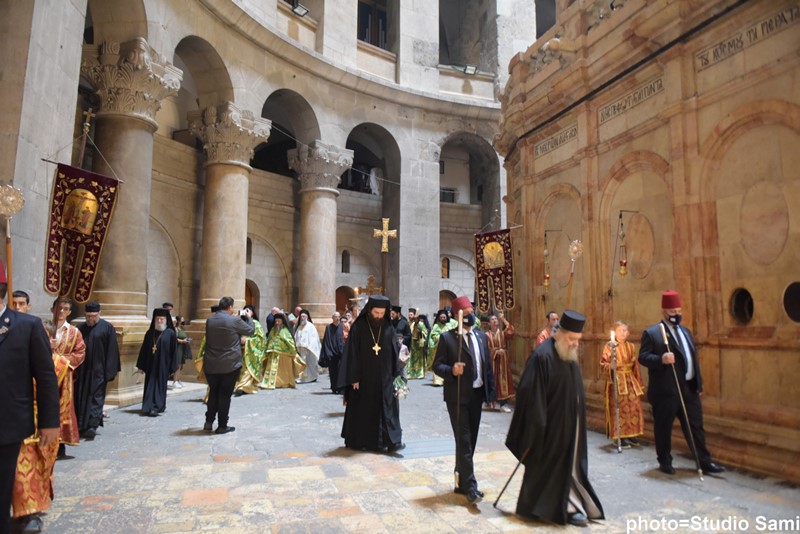 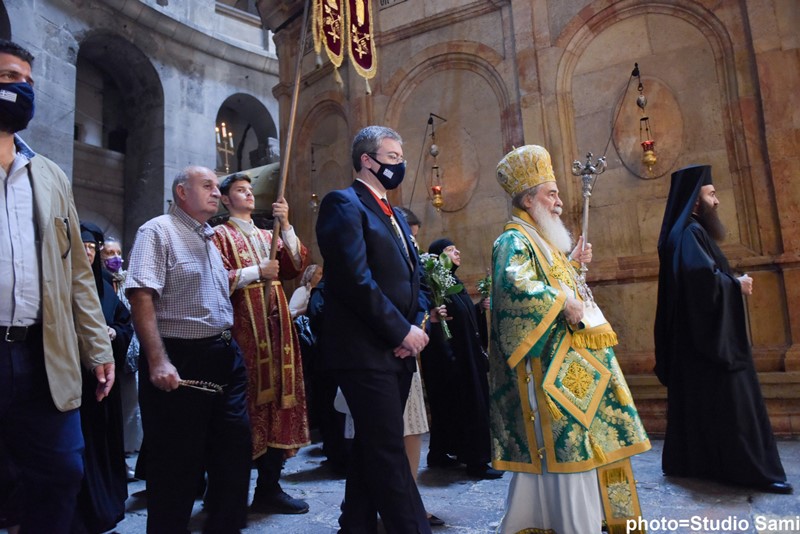