On May 16, 2022, Patriarch Theodore II of Alexandria and All Africa travelled to the Anba Bishoy Monastery in the Wadi El-Natrun (Nitria) region of Egypt to participate in the 12th General Assembly of the Middle East Council of Churches.

At the opening session of the present Assembly under the general title “Behold, it is me; do not be afraid” the Patriarch spoke as follows:

“Dear Brothers and Sisters in the Lord and Delegates,

It is with feelings of profound emotion and joyfulness that we address today the 12th General Assembly of the Middle East Council of Churches, which is meeting in our hospitable country of Nile, after six years in the midst of myriad problems, having accomplished a feat and for this reason we exclaim, “Abraham saw the day of the Lord and gave thanks”.

This meeting is taking place during a very critical period in which the geopolitical confrontation between East and West is being greatly rekindled, leading not only to political but also to religious confrontation, which is becoming like the gaping mouths of the beasts of the Apocalypse, with an ominous outlook for our Christians. The growing spread of religious fundamentalism in our neighbourhood, the unacceptable phenomena of extreme violence and terrorist polymorphism are leading to the tragic uprooting of Christians from the territories of the Middle East. We all know this and are experiencing it. We are experiencing the phenomenon of the unfavourable demographic reversal at the expense of Christians, which is generated by the uncertainty and precariousness of Middle Eastern Christianity. They are leaving us because they cannot find a just and lasting solution to their problems.

We fully agree with the motto of our assembly this year, “Behold, it is me; do not be afraid”. What are we the Churches doing to protect Christians, our members? The presence of our Christians in the hallowed soils of the Middle East must remain active based on both strengthening and stimulating the fervent faith of the presence of our Lord Jesus Christ in their tested lives and on the consolidation of their security. Only then will hope be born, and as the apostle to the Gentiles Paul so characteristically says, “seeing that affliction worketh patience, and patience worketh trial, and trial worketh hope, and hope shall not fail”.

We must fight, struggle together to remove the causes that lead our Christians to flee from the Middle East from their ancestral homelands, so that they may remain in their own land in conditions of justice and peace, strongly condemning the diverse conflicts and preventing the emergence, strengthening and continuation of religious fanaticism, wherever it comes from, especially from religious authorities. Promoting the universal right of religious freedom as the undeniable and supreme right of every human being.

To this end, we need to continue and even more so to develop dialogue with the other religions of the Middle East and especially with the Muslim religion, which is in the strong majority, in order to establish understanding and peaceful coexistence, because our Christians are not strangers to this land, they are not foreigners, but they have been born and raised in this land for millennia. After all, our Christians are the bridge between West and East, Christianity and Islam, tradition and modernity. They live on the border between two worlds and two cultures, promoting the peaceful coexistence of all as a proposal and a way of life. We believe that the Christian presence is an important factor in the post-conflict order beyond the fragmentation of political borders and divisions.

In order to achieve this goal and objective, we must work consciously to solve all the problems that unfortunately exist and are being perpetuated in our region. If we fail, we will have to face the “abomination of desolation”, the disappearance of the Middle East from Christians. As religious leaders we must wave and listen to the cries of anguish of our faithful for human rights and religious freedoms so brutally violated in our time. We must take on roles and get to the point by participating in shaping the political future of the region.

With these scattered and perhaps sad thoughts, we welcome the proceedings of our very promising 12th General Assembly and wish from our hearts that a light of hope may emerge from it, light of the resurrected Christ; that the wind of Pentecost may blow and the Spirit of redeeming love and warm hope may breathe and be established in the midst of our Christians, martyrs of their everlasting existence in the sanctified Middle East.

In conclusion, I express my warm thanks and brotherly love to His Beatitude Patriarch Theodore II of the Coptic Church for his excellent hospitality, as well as to the fathers of the host monastery, this ancient ascetic palladium of Coptic Christendom, and to the members of the General Secretariat of the Council and the Executive Committee of this General Assembly. 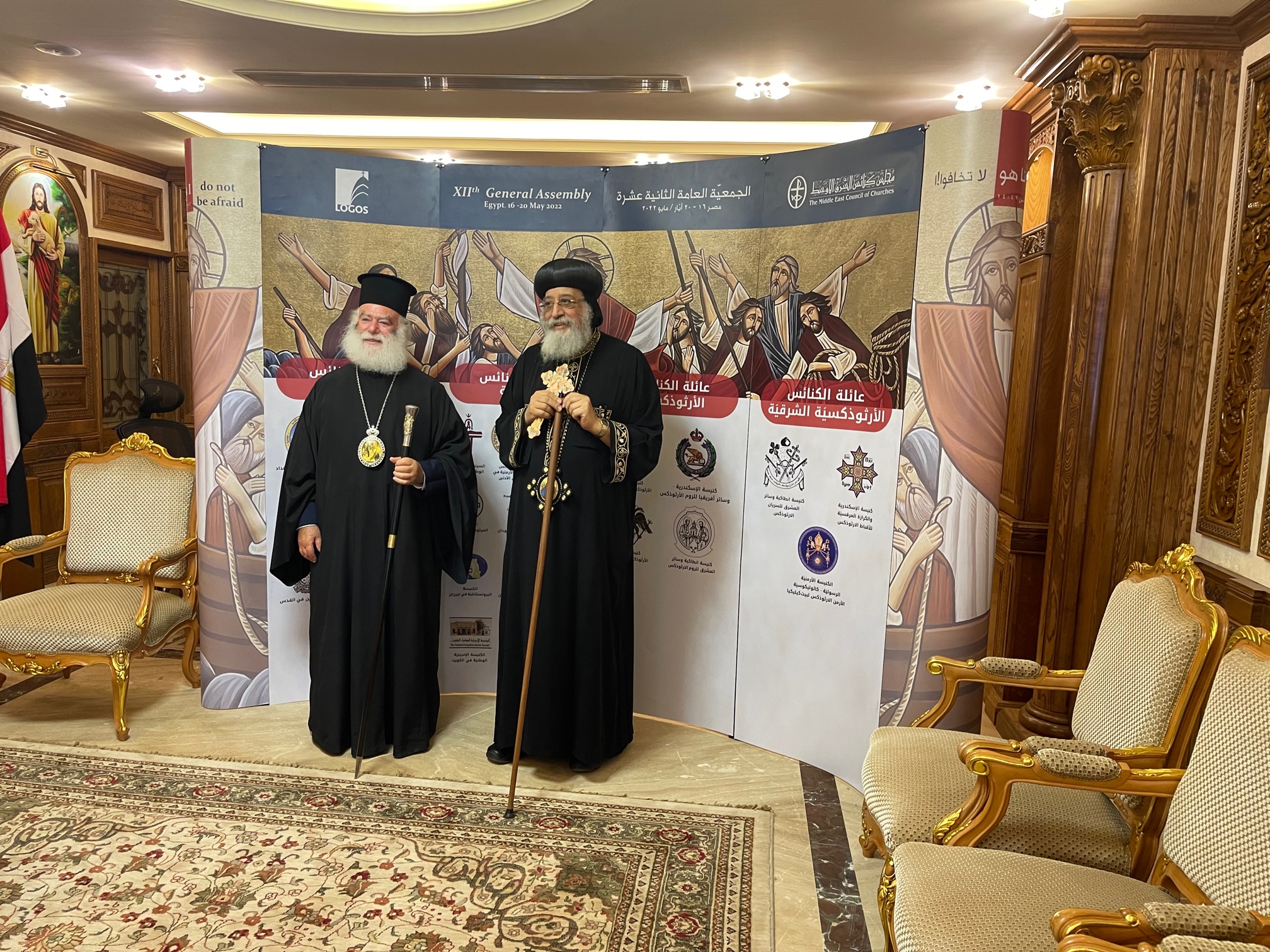 The Bishop of Claudiopolis at St Nicholas Cardiff