in FrontPage, Patriarchate of Romania

Patriarch Daniel spoke on Thursday about St. Demetrius the New as a hesychast saint and outlined his connection with the believers on both banks of the Danube River.

His Beatitude also referred to St. Gregory Palamas, the Archbishop of Thessaloniki, and described him as a fruit of the work of grace among the Thessalonians: they fulfilled throughout the centuries Saint Paul’s exhortation to them: Pray without ceasing!

The Patriarch of Romania described the biography and finding of the relics of Saint Demetrius the New, indicating that a Wallachian ruler constructed the first cathedral in his honour.

A saint of people on both banks of the Danube

“It is known that the rulers of Wallachia were from the Basarab dynasty. It is an ancient Thracian origin of the ancient Basarab family because in that area, in the south and north of the Danube, there was a tribe, the Bessi,” Patriarch Daniel said, referring to the name of the town of origin of the Venerable Demetrius.

“Their king was called Bessarabos. And from here, the rulers of Wallachia, wanting to show that they have continuity in history and that they are autochthonous, kept this name in the Basarab Dynasty. This explains the connection between this venerable saint and the pious people on both sides of the Danube.”

“Today, Basarabovo Monastery is in the diocese of His Eminence Metropolitan Naum of Ruse. That is why he is often invited to Bucharest. A particle of the relics of St. Demetrius the New from Basarabovo was given by His Beatitude Patriarch Teoctist to this monastery as a sign of fraternal communion and appreciation because St. Demetrius the New lived as a monk in those areas in the Lom Valley, where it was favourable place for prayer, stillness and hesychia,” His Beatitude noted.

“Saint Demetrius the New, the protector of Bucharest, is a praying saint, a hesychast, who lived at the end of the 13th century and the beginning of the 14th century,” the Patriarch of Romania recalled.

“It is known that starting from the twelfth century, with the year 1185, the Vlach-Bulgarian Empire (or Romanian-Bulgarian) was established in these parts by the brothers Peter and Asen, who were of Vlach origin and who, together with the Bulgarians, established the Romanian-Bulgarian Empire of Tarnovo, which had St. Paraskeva as its protectress. So, Romanians and Bulgarians had a great reverence for the venerable, praying saints.”

His Beatitude also mentioned another saint who is related both to the Vlach-Bulgarian empire from the south of the Danube and to the Basarab Dynasty: “In the 14th century, in Bulgaria, in Serbia and the Romanian Countries, among the hesychast saints was also St. Theophano Basarab, who was the wife of a Bulgarian tsar, and towards the end of her life she became a nun.”

“She was Theodora, the daughter of Basarab I, the Founder of Wallachia, and she became a nun, with the name of the Byzantine Empress Theophano. She lived near the Tarnovo fortress.”

In the second part of his sermon, Patriarch Daniel referred to the solemn year of prayer in the Romanian Patriarchate and remembered St Gregory Palamas, Archbishop of Thessaloniki.

A fragment of St Gregory’s relics was brought to Bucharest for the festivities of Saint Demetrius the New by a delegation headed by Metropolitan Panteleimon of Veria, Naoussa and Kampania.

“St. Gregory Palamas is the theologian of unceasing prayer, together with St. Gregory of Sinai, but above all, he is the theologian of the uncreated light, of the glory of the Most Holy Trinity, which appeared at the Transfiguration of the Saviour Jesus Christ as not light from the sun, but light springing from within the person of the Saviour Jesus Christ – an uncreated, eternal light,” His Beatitude explained.

“He demonstrated to his opponents, who were imbued with Western scholastic thought, that there is a distinction between the divine nature, which is not shared with creatures, and the divine energies or divine works, which are shared through God’s love with creatures. St. Gregory Palamas is also called the theologian of uncreated energies.”

Grace “is given to us by Christ and shared with us by the Holy Spirit, especially through the Holy Mysteries of the Church, but also through the life of prayer. Through prayer, we encounter God, and He pours His love into the soul of the one who prays.”

“St. Paul, when he blesses the Corinthians in the second Epistle, says this: May the grace of the Lord Jesus Christ, and the love of God, and the fellowship of the Holy Spirit be with you all!”

“One can understand from this blessing what grace is: The grace of our Lord Jesus Christ is the love of God the Father and the fellowship or communion of the Holy Spirit. So, the grace belongs to the entire Holy Trinity, revealed to us by Christ and given to us, shared by the Holy Spirit,” the Patriarch explained.

If in the Old Testament grace was designated by a word that meant the kindness and mercy shown by God to someone inferior to Him, in the New Testament, “grace is the love of God shown in Jesus Christ and shared through the Holy Spirit.”

A saint, the fruit of unceasing prayer in Thessaloniki

“In conclusion, however, we would like to show a work of God’s grace over time,” His Beatitude emphasised.

“In the New Testament, the Saviour says: Watch and pray, that you enter not into temptation. But, in a more intense and persistent form, St. Paul wrote in the First Epistle to the Thessalonians (5: 17): Pray without ceasing! This is the basis of hesychasm.”

Researchers say that St. Paul wrote this epistle in the year 51. And the theological teaching of St. Gregory Palamas was accepted by the Church in 1351, the Patriarch noted.

“So, the Apostle Paul said to the Thessalonians: Pray without ceasing! And, over 1300 years, the Archbishop of Thessaloniki became the theologian of grace and unceasing prayer. Here we see how God works through His saints, for the glory of the Most Holy Trinity and our salvation,” the Patriarch of Romania concluded.

Thirty-nine hierarchs concelebrated, including Metropolitan Pateleimon of Veria, Naoussa and Kampania, who brought the relics of St. Gregory Palamas to Bucharest and Metropolitan Naum of Ruse, in whose diocese, St Demetrius the New was born. 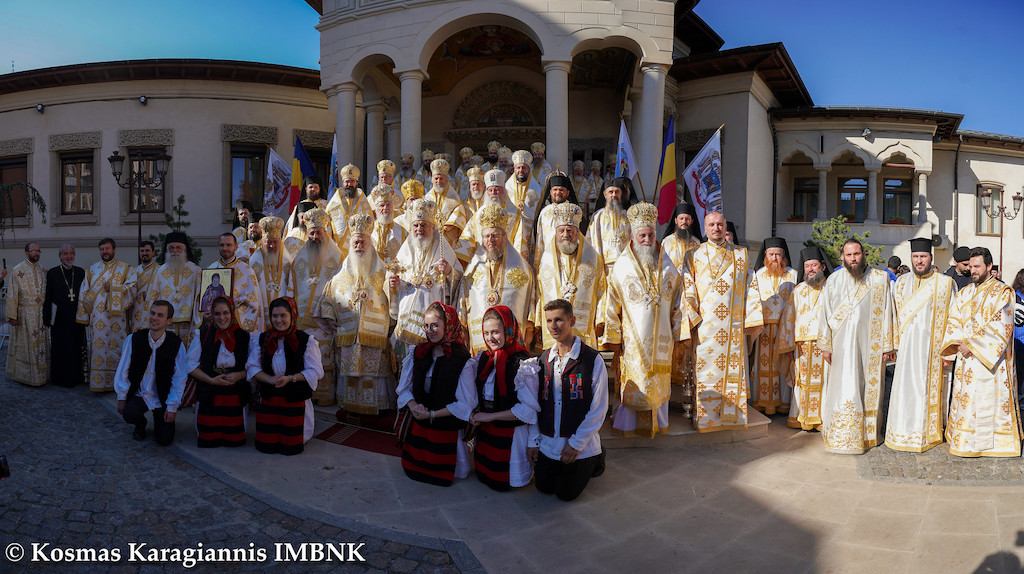 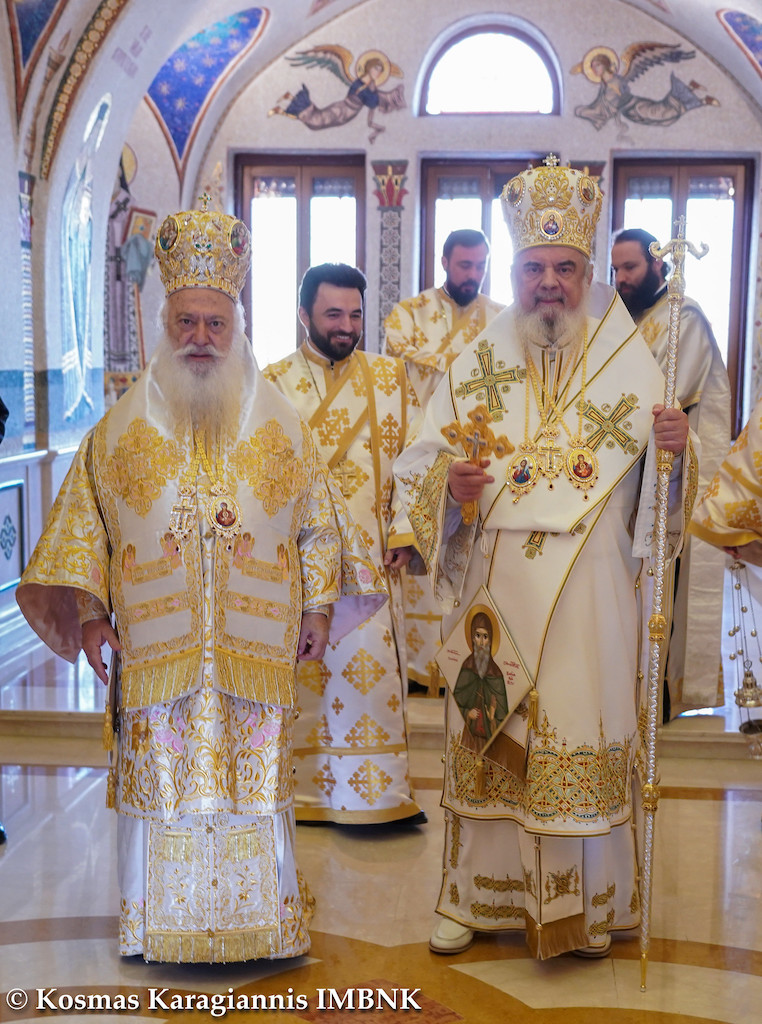 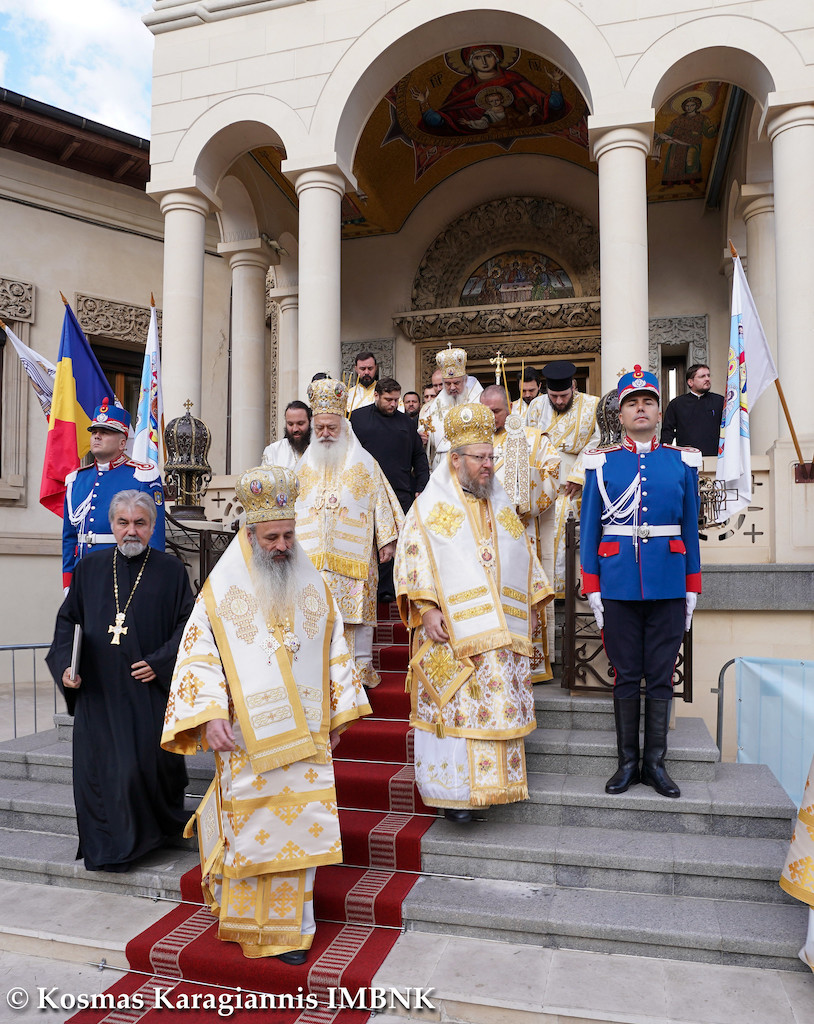 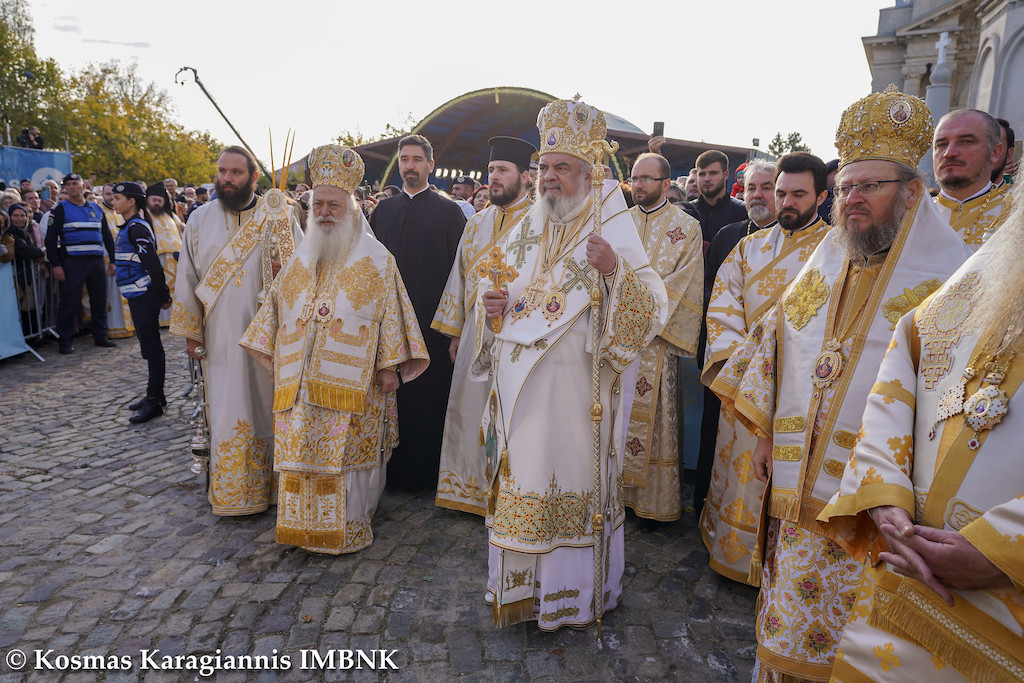 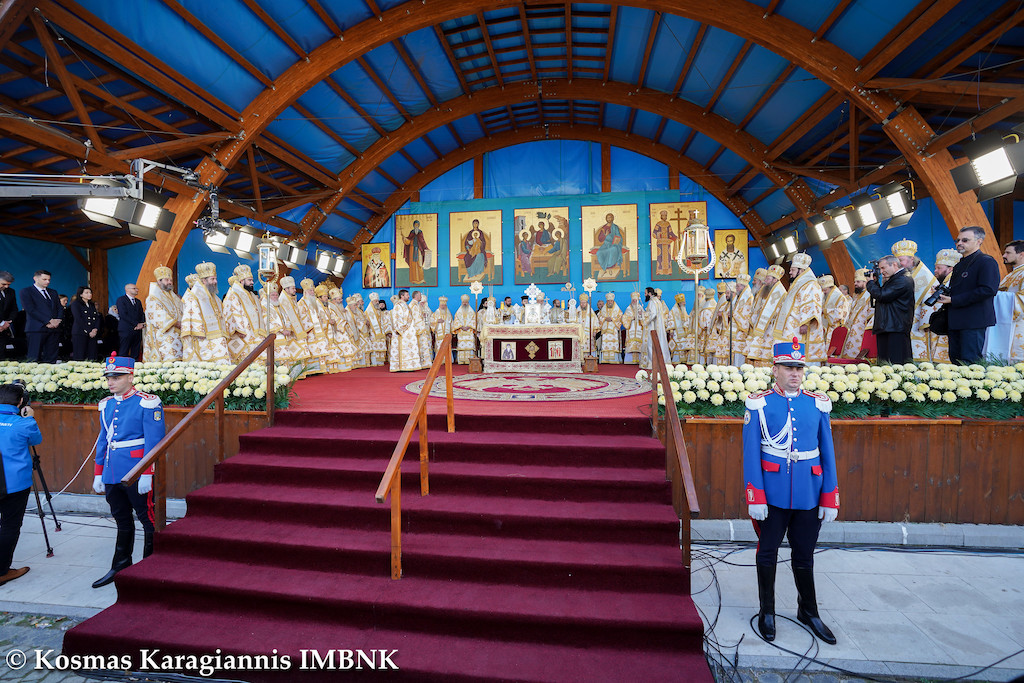 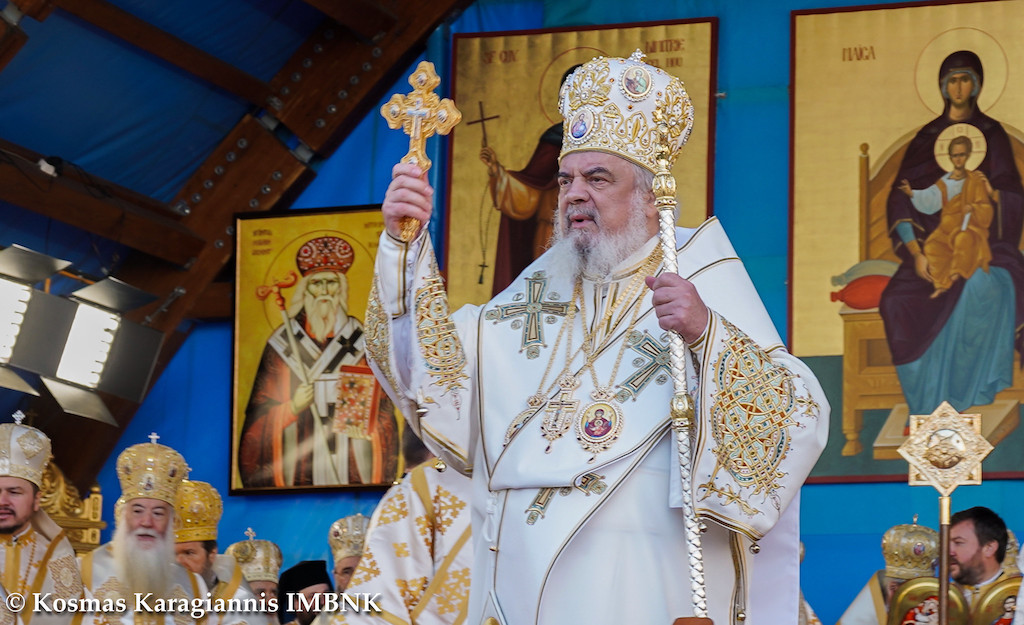 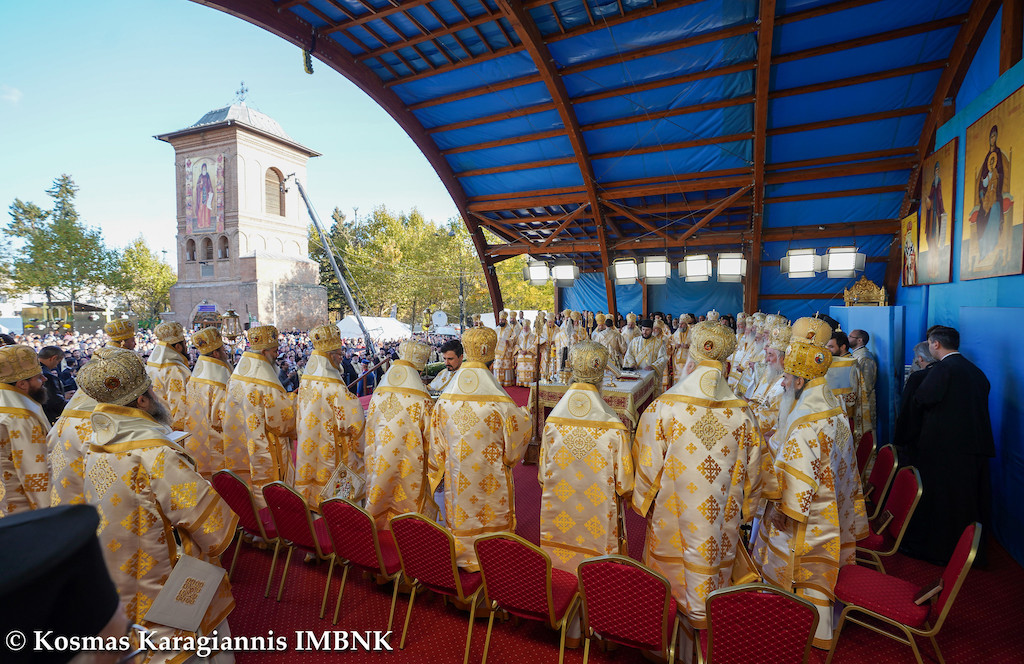 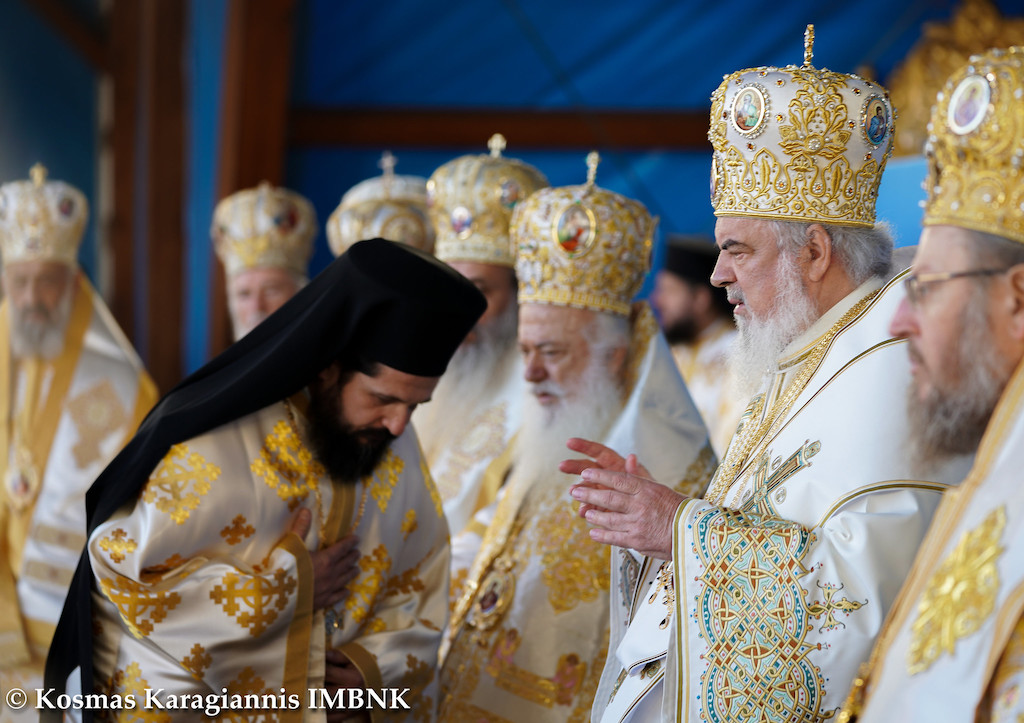 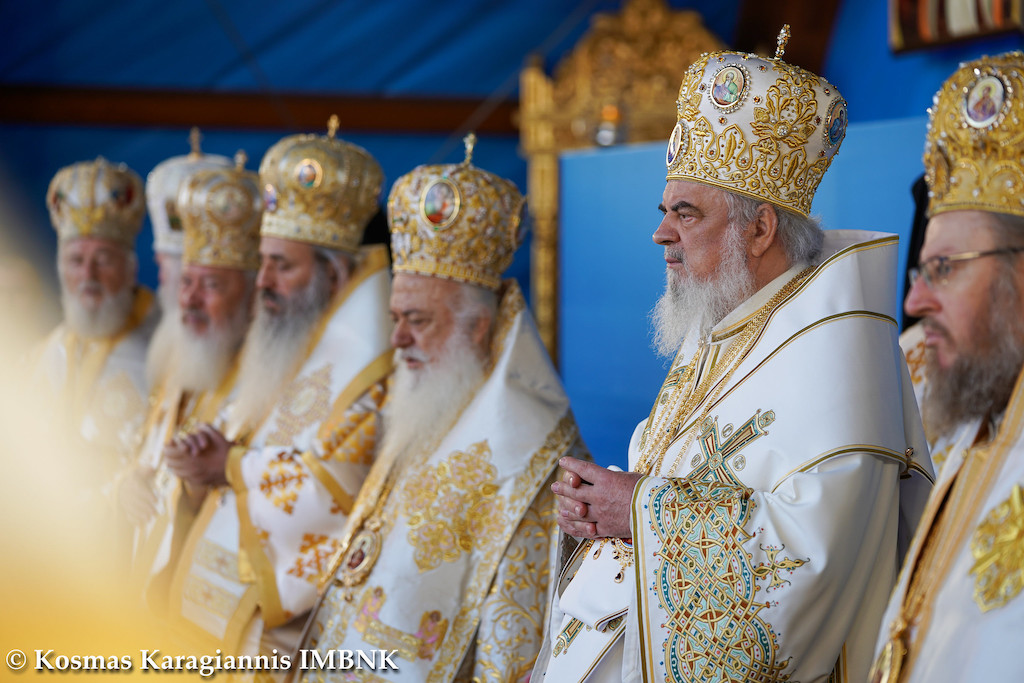 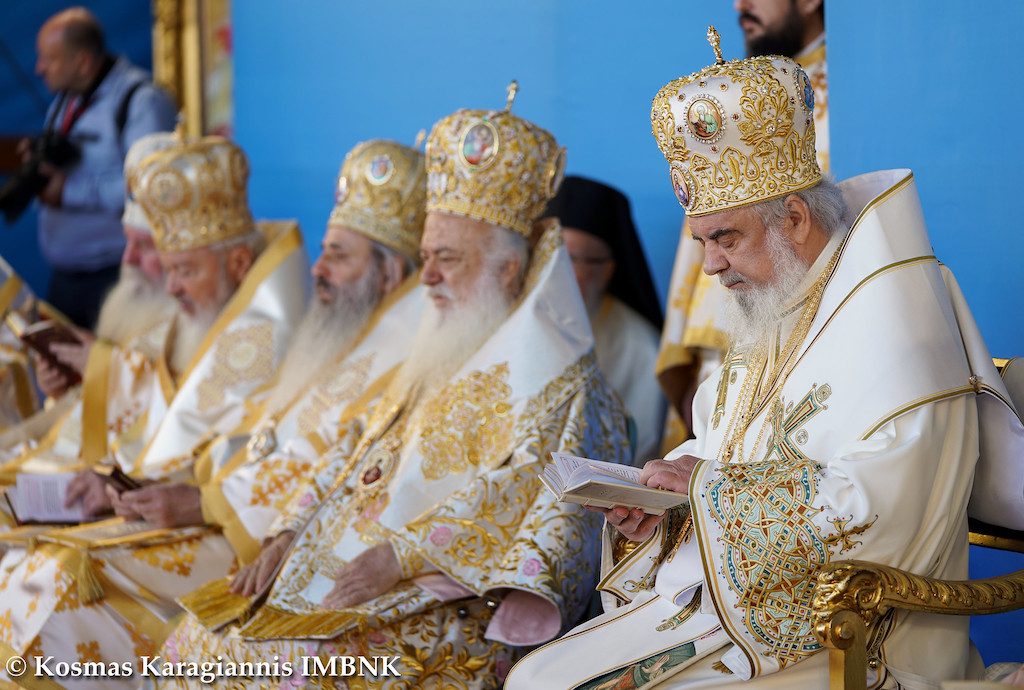 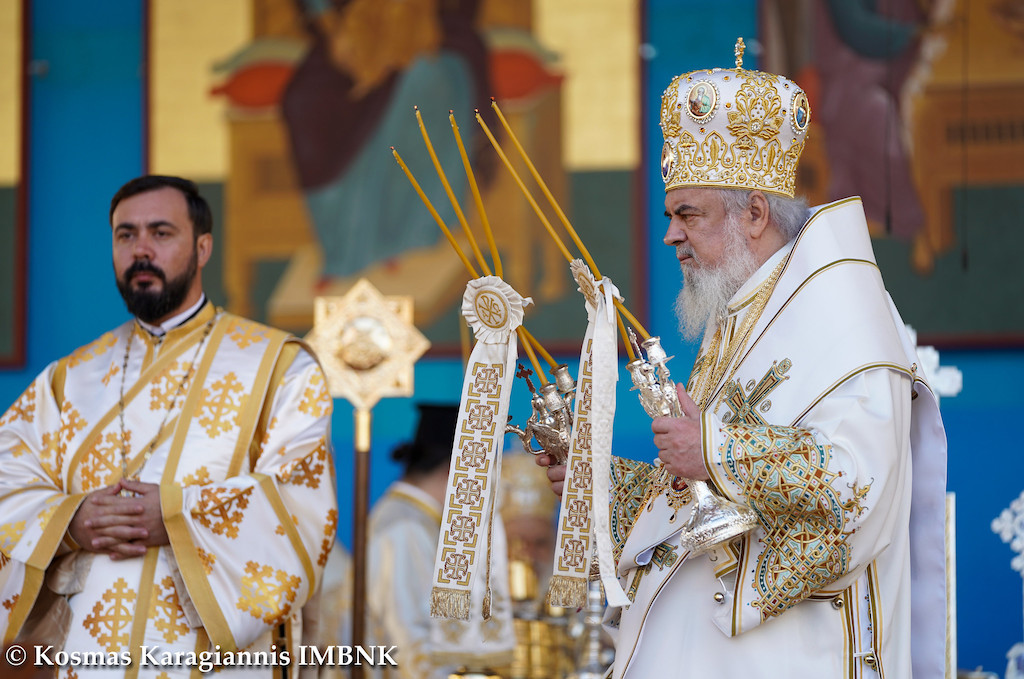 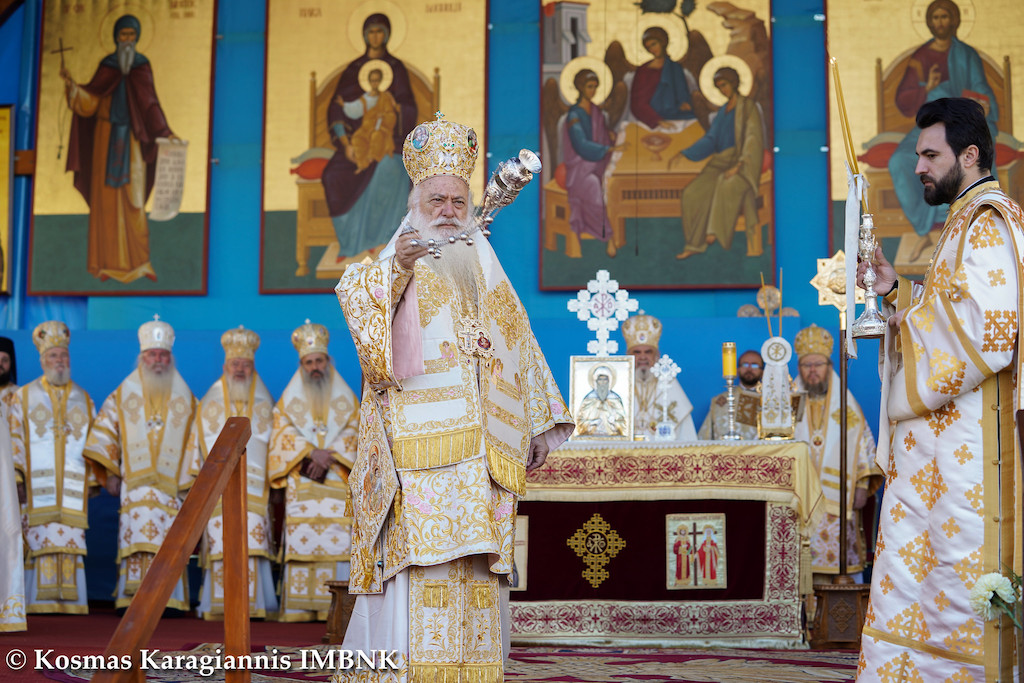 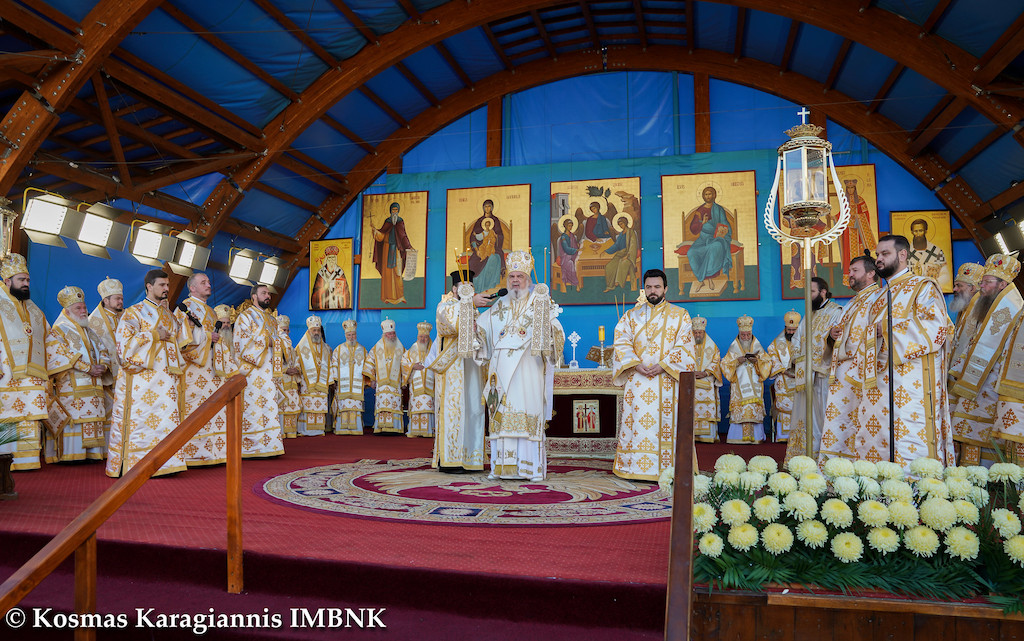 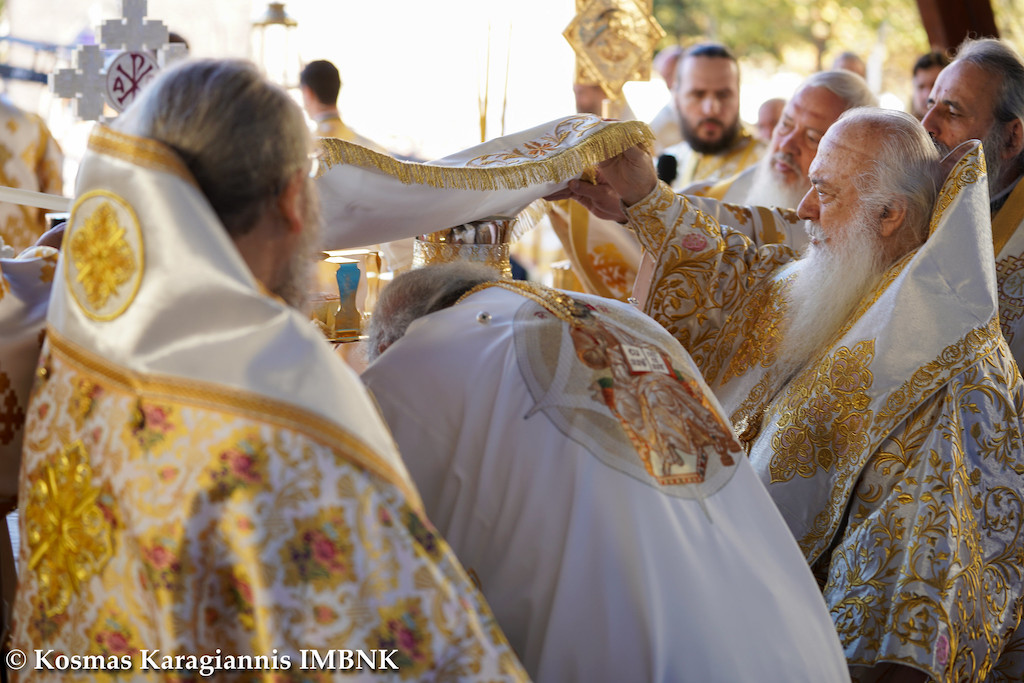 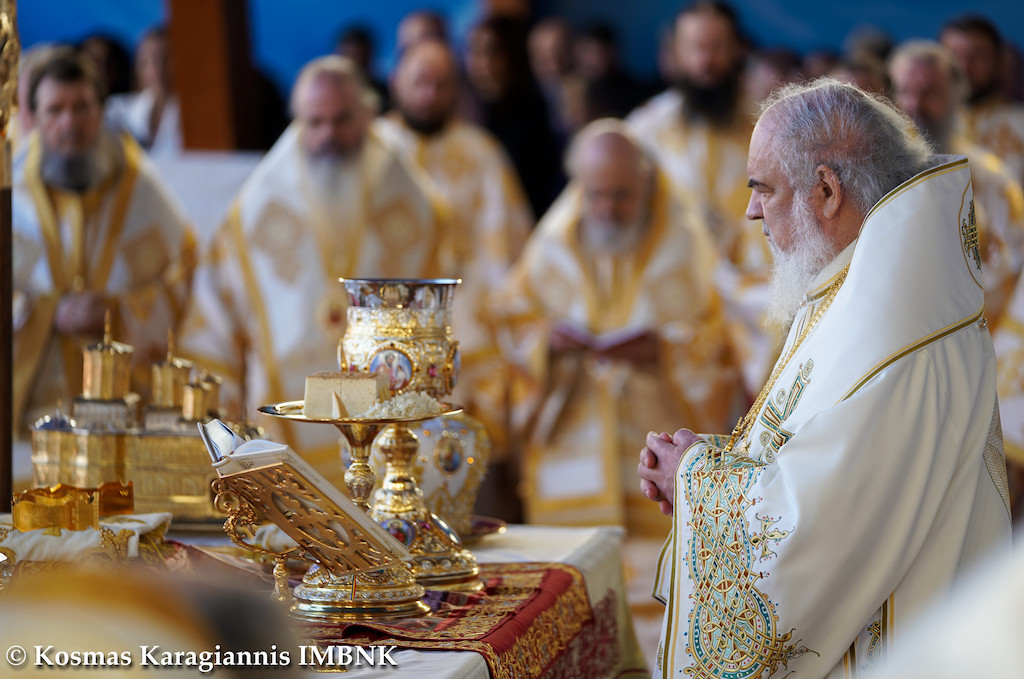 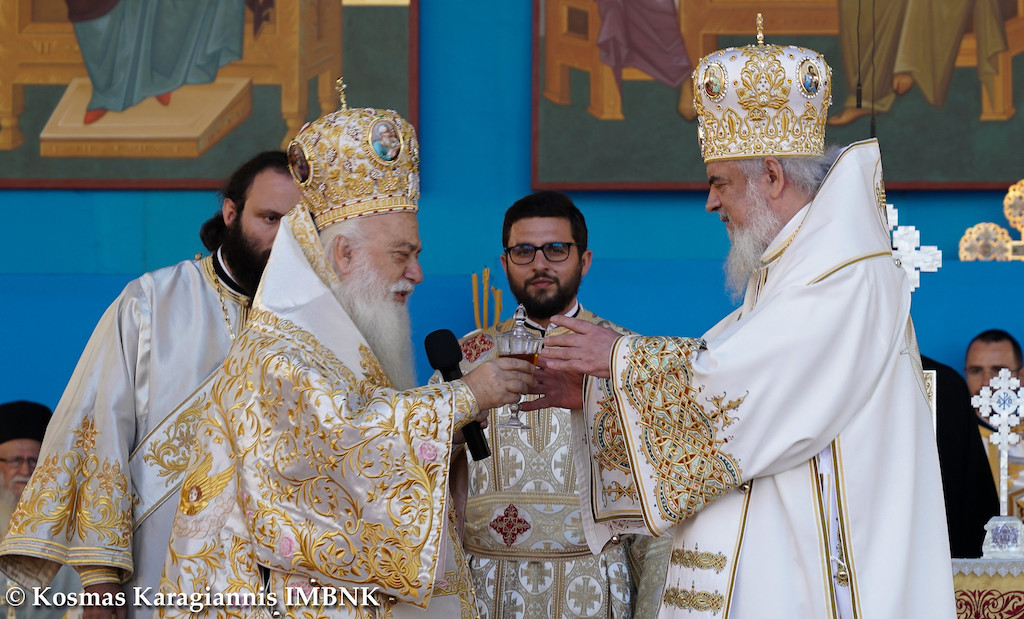 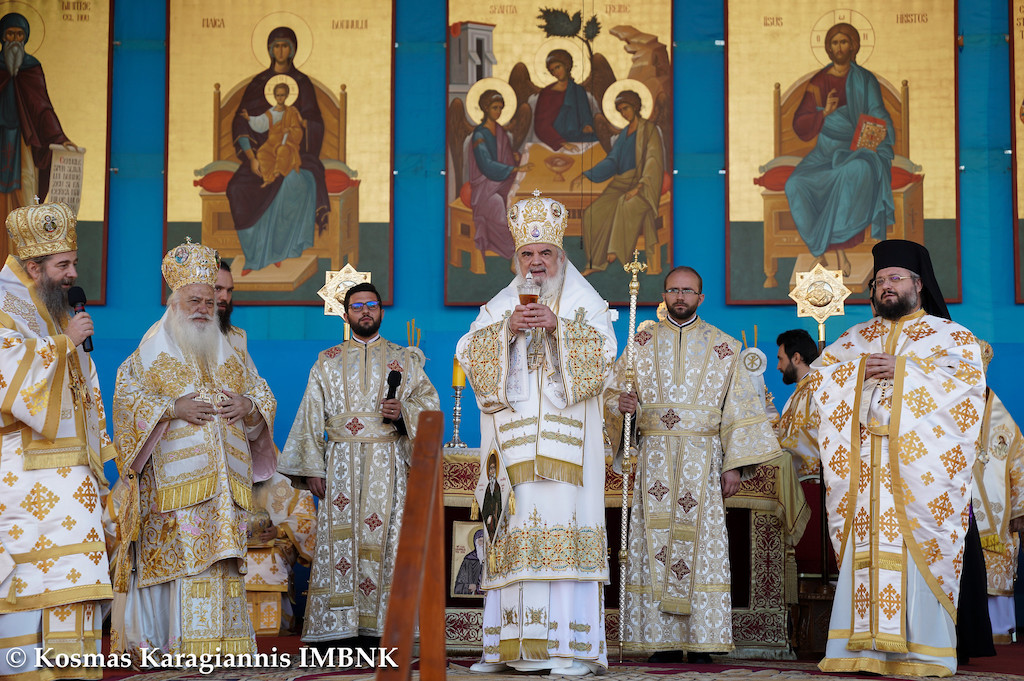 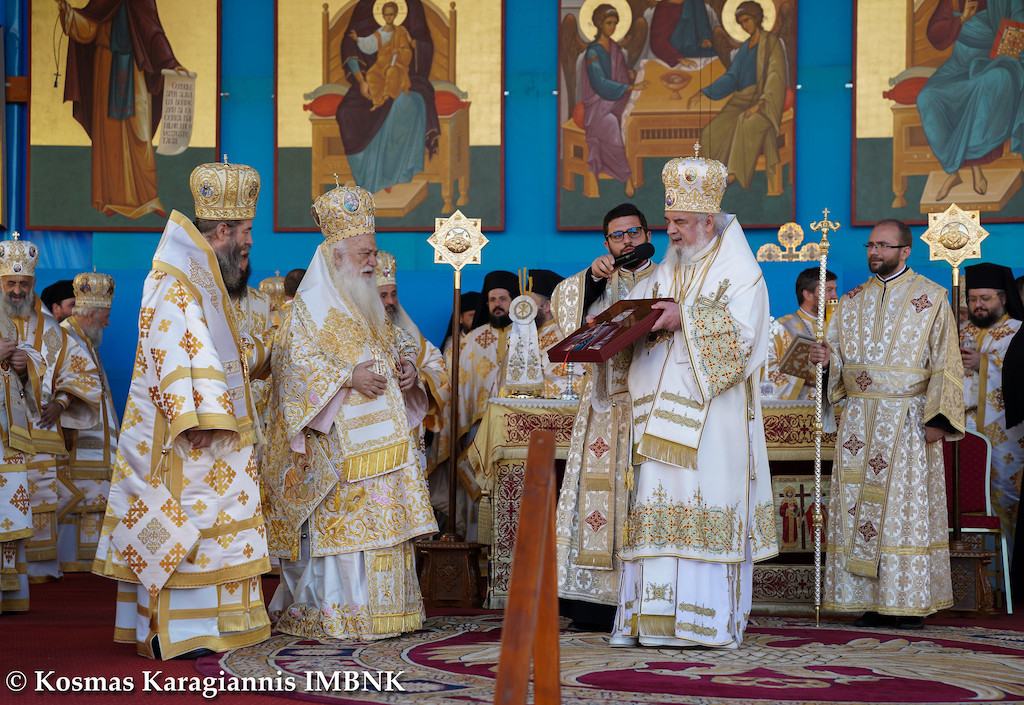 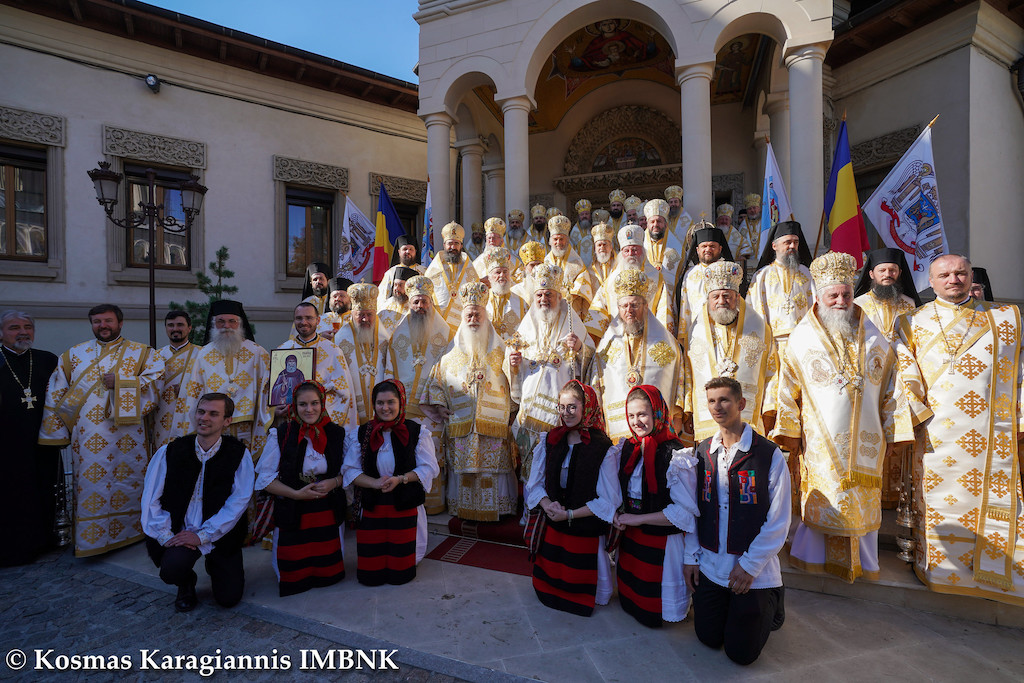 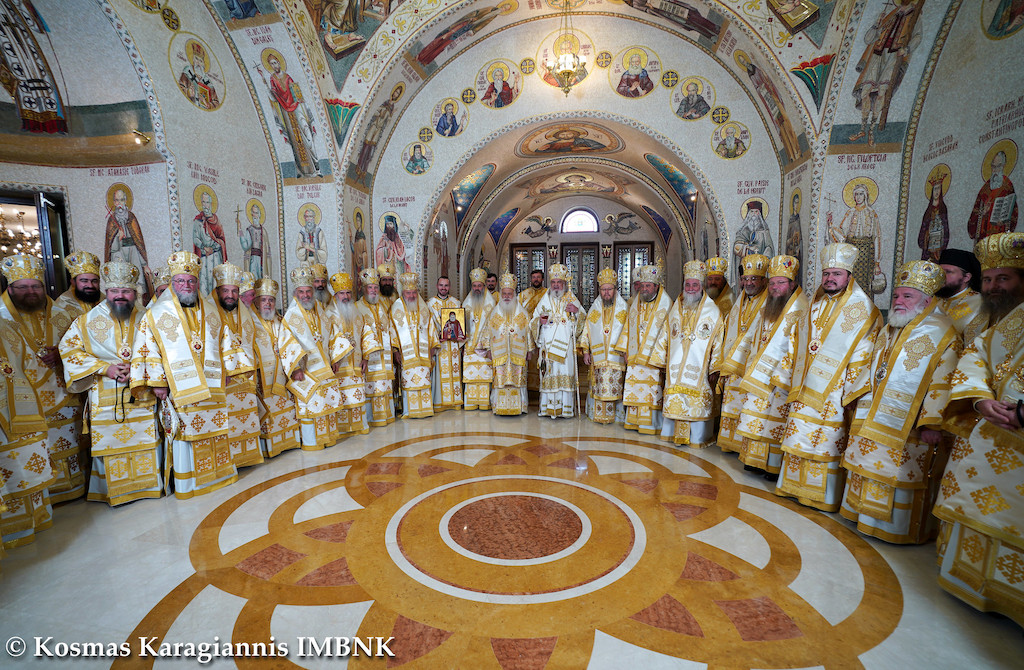 The Prime Minister of Australia and Archbishop Makarios at an anniversary event for “OXI” (NO!) Day