Vespers for the Sunday of Orthodoxy was celebrated joyfully and with solemnity at Sts. Panteleimon, Anna, and Paraskevi Greek Orthodox Church in Markham (north of Toronto), Ontario, on the evening of Sunday, March 13th.

Archbishop Sotirios of Canada presided at the celebration, with Bishops Andriy of Toronto (Ukrainian Orthodox Church of Canada) and Athenagoras of Patara (Greek Orthodox Archdiocese of Canada) in attendance.

Over twenty-five priests and deacons from the Toronto Clergy Association of the Greater Toronto Area participated, representing the Greek, Romanian, Antiochian, Ukrainian, Carpatho-Russian, and Canadian (OCA) Orthodox parishes and communities. The responses were sung by chanters and choirs representing the various churches in Greek, English, Arabic, Romanian, Ukrainian, and Slavonic. Many of those who have attended the Sunday of Orthodoxy services in Toronto over the course of many years commented upon the fact that the singing and chanting of this year’s service was undoubtedly of the highest quality in their memory.

Archbishop Sotirios offered the homily, amplifying the meaning of the celebration and reminding all present that we, as human beings, are all images – icons – of God. He went on to speak of Russia’s invasion of Ukraine, and the spiritual meaning and consequences of this unprovoked war, especially since it was initiated by a traditionally Orthodox country. He called all present to offer prayerful and material support for all those suffering, and especially to ask the Lord to bring peace as soon as possible.

With the blessing of Archbishop Sotirios, Bishop Andriy, himself from Ukraine, offered personal remarks in regard to the war in Ukraine, underlining the fact that Ukraine is a peaceful nation that has never made war against anyone, and describing the horrendous destruction and suffering which is being wrought in Ukraine at this time due especially to the targeting of the civilian population and infrastructure by Russian troops.

Following this, Fr. Bohdan Hladio, president of the clergy association, thanked Archbishop Sotirios as well as the parish council and philoptochos of Sts. Panteleimon, Anna, and Paraskevi Church for their kindness and hospitality in organizing this event, and offered words of gratitude to the Archbishop, Clergy, and Faithful of the Archdiocese for their outstanding generosity in support of those suffering in Ukraine as well as the over two million refugees who have fled the country.

Following the service, everyone proceeded to the church hall where the parish council president, John Psihos welcomed everyone, and the Philoptochos offered everyone a wonderful lenten meal, complete with delicious Greek delicacies, which were greatly appreciated and enjoyed by all. The evening ended with His Eminence again thanking the bishops, clergy, the chanters, the parish council, and especially the Philoptochos for their contribution to the success of this event, and following his closing blessing clergy and faithful from all our communities departed to their homes, spiritually and physically fortified and prepared to continue their Great Lenten journey to Pascha. 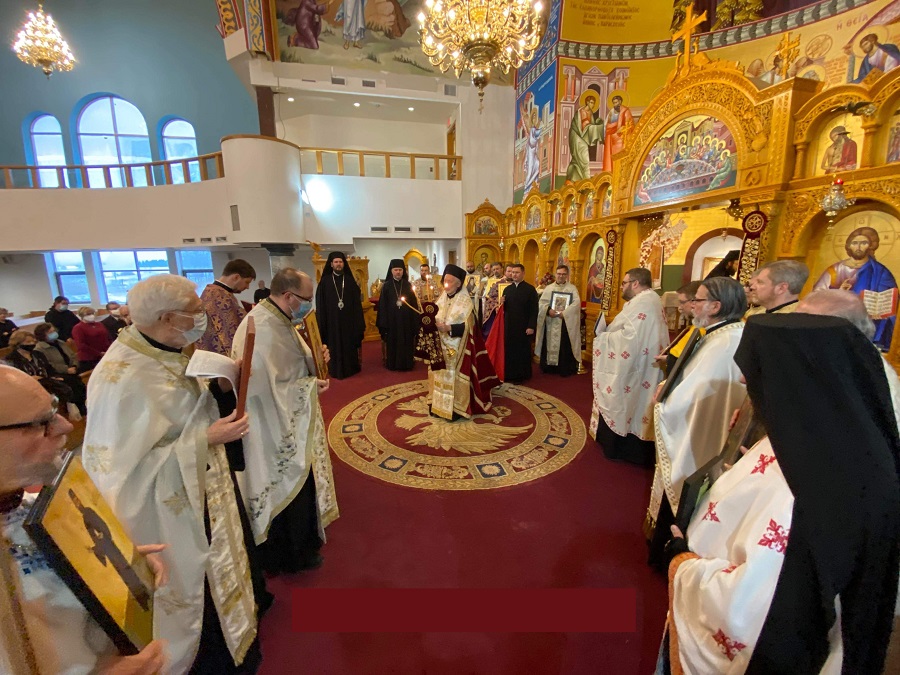 Archdiocese of Canada: Fundraiser for the Old Age Home of the Ecumenical Patriarchate

Pastoral visit of Archbishop of Canada to British Columbia

Canada: Parades in Celebration of March 25th, 1821, and Spiritual Retreats for the Ladies Philoptochos Societies

Archbishop of Canada: Sprung From the Sacred Bones of the Greeks

Archbishop of Canada: With great anticipation we have been following the horrible events taking place in Ukraine

Archbishop of Cherniyiv: Sanctions should be imposed on Kirill and Hilarion over the war in Ukraine