The memory of Saint Andrew the First-Called Apostle was celebrated in Adelaide, with splendor and ecclesiastical magnificence.

The centre of the celebration was the Holy Church of Saint Andrew in the suburb of Noarlunga, where the holy Services were presided over by Archbishop Makarios of Australia.

On the eve of the feast day, Archbishop Makarios officiated at the Festive Vespers, accompanied by the reverend clergy of the city, while also joining in prayer from the Holy Altar were Bishop Silouan of Sinope, Archiepiscopal Vicar of Adelaide and Bishop Emilianos of Meloa.

During the Vespers Service, the Archbishop bestowed, on behalf of Ecumenical Patriarch Bartholomew, to the Proistamenos of the Parish of Saint Andrew, Noarlunga, Father Christodoulos Vassilaris, the office of Archimandrite of the Ecumenical Throne, in recognition of his love for the Mother Church, the Ecumenical Patriarchate, and his noble active interest in Her welfare and good reputation. The Archbishop emphasised the honour and deep love, that we all owe to the Holy Great Mother Church of Christ of Constantinople and our corresponding responsibility for the protection of Her honourable spiritual ecclesiastical interests.

On the main day of the feast, Archbishop Makarios of Australia officiated at the Matins and presided over the festive Divine Liturgy, whilst being joined by Bishop Silouan of Sinope and Bishop Emilianos of Meloa, and by Priests and Deacons of Adelaide and other Archdiocesan Districts.

The splendour of the feast day was increased by the ordinations of Deacon Petros Georgiadis, to Presbyter, and of the chanter John Saredakis, to Deacon, which took place in an atmosphere of deep emotion and spiritual euphoria.

The Archbishop’s admonition to the newly ordained Presbyter included the exhortation to have Christ as the measure and criterion of his priestly ministry. Referring first to the Gospel reading of the day, He emphasised to him: “You must become like the Disciples, who were looking for Him and, as soon as they found Him, they followed Him and never stopped following Him and looking for Him.” Because, as he pointed out, “this, precisely, is what constitutes the fact of faith – the trust in Christ. I meet Christ and I follow Him with confidence, without asking for assurances, commitments, proofs and or anything in return”.

Addressing the newly-ordained Deacon, Archbishop Makarios called him to offer his entire being to the ministry of Christ and the Church, because ” The harvest indeed is plenteous, but the labourers are few.” (Matthew 9:37). With paternal love, he urged him with the following words: “Surrender yourself to the mercy and love of God, because the priesthood is not a “career” that promises comforts, honours, glories and short-term pleasures. The road of the priesthood, which you are entering today, is narrow and difficult, but it leads safely to Christ. It is a journey against the conventions, the desires and the perspectives of this world, that is, the secular spirit, which gives priority to the ephemeral and the transitory and not to the permanent and eternal”.

At another point, Archbishop Makarios emphasised to the ordained Deacon: “Do not make compromises in your ministry, but dedicate yourself with a spirit of sacrifice and work for the unity of our Church and the salvation of our people. Only in this way will you become a worker in the Lord’s harvest and therefore be included in the category of His few workers. Few, but honest, loyal and dedicated.”

For his part, the new Deacon, after thanking his family, priests and bishops, who shaped his ecclesiastical ethos, referred with words of gratitude, to Archbishop Makarios of Australia, thanking him for his love and remembering his words, from a previous ordination, which he conducted: “Leave everything freely to the providence of God and then, wherever you look around yourself, everything will bring you joy”, which, as he said, he keeps deep in his heart.

After the end of the Divine Liturgy, Archbishop Makarios blessed the celebratory lunch, which was offered to all in the large congregation. 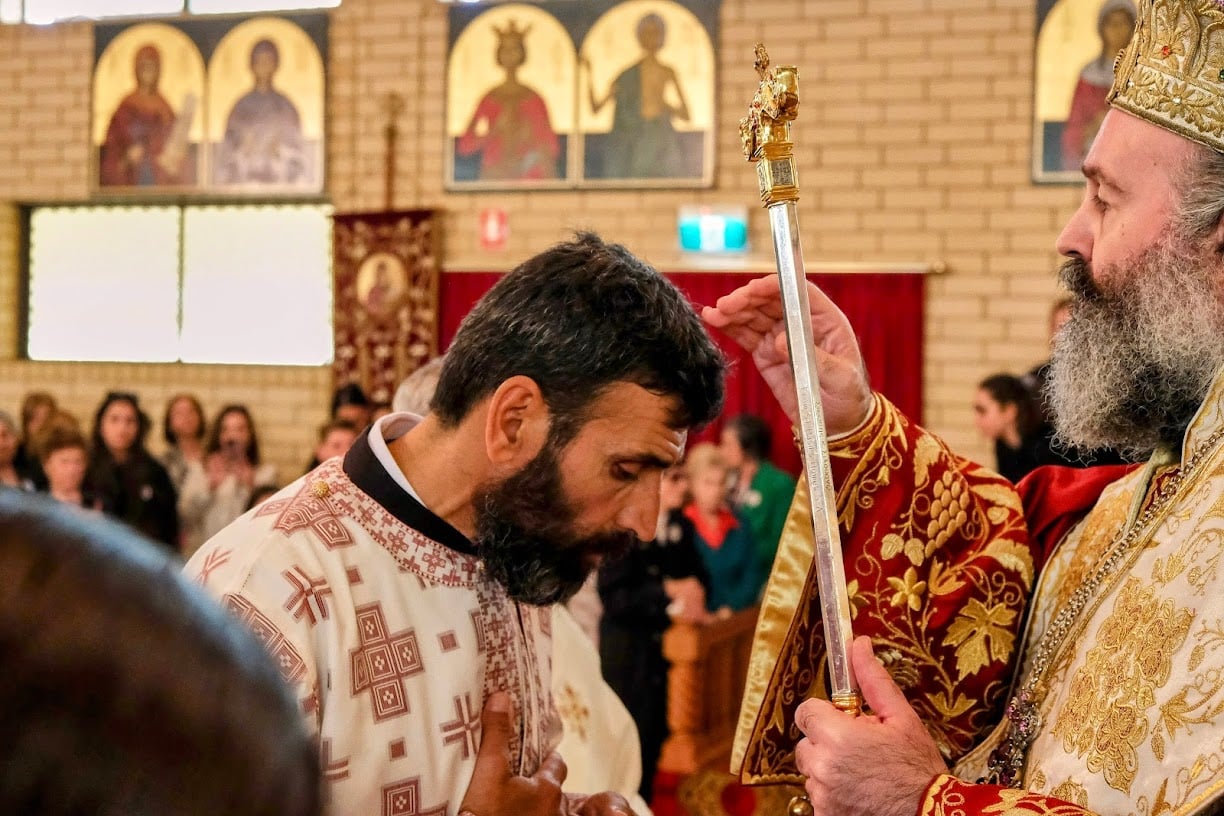