Nagorno-Karabakh: Armenians set fire to their homes before their villages pass into Azerbaijani control

Houses in the villages of Nagorno-Karabakh, which are expected to return to Azerbaijani control tomorrow, were set on fire today as residents set fire to them before fleeing the area and fleeing to Armenia, according to an AFP reporter.

Armenia requested and received an extension of 10 days, in order to have enough time both the army and the civilians to leave the Kalbajar region in the Nagorno-Karabakh enclave.

“It is the last day, tomorrow the Azeri soldiers will be there,” said a soldier in the village of Charaktar in the Chalbachar area, which will be handed over to Baku.

Only in this village, which marks the border with the neighboring area of Martakert, which will remain under Armenian control, at least 6 houses were burned this morning. The flames were coming out of the windows while gray smoke was rising in the sky over the valley of the area.

“It’s my house, I cannot leave it to the Turks,” as the Azeris are often described by Armenians, the owner of one of the houses explained, while throwing flammable materials and lighters in which he had poured gasoline in an attempt to set fire to the floor of the former living room, in a completely empty house.

“It simply came to our notice then.” But when they started dismantling the hydroelectric plant, we understood.”

“Everyone will set fire to his house today; they have given us until midnight to leave.”

They carry icons, furniture and all kinds of things, even the graves of their ancestors. The icons coming from the Dadivank Monastery of the Armenian Apostolic Church also cause a lot of emotions.

“We also carried the grave of our parents, the Azeris will want to desecrate them, it is unbearable,” he said.

A day earlier, at least 12 houses were set on fire in the same village and the surrounding area.

The Moscow-sponsored peace agreement between Yerevan and Baku has ended nearly seven weeks of fierce fighting in Nagorno-Karabakh. Under the agreement, Azerbaijan is regaining large territories that have been under Armenian control since the early 1990s. 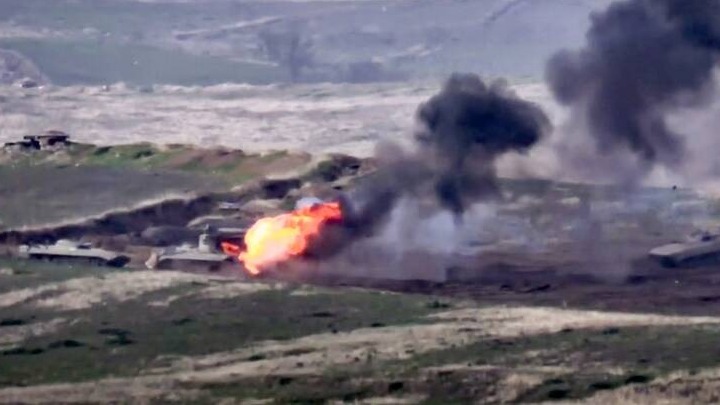 Turkish FM: Any restrictive measures against us will ruin everything

Turkish FM: Casus belli the expansion of territorial waters in the Aegean

The funeral service for the late Metropolitan Ioannis of Lagadas, Litis and Rentinis took place