Meeting of the Archbishop Ieronymos II with the Ambassador of Lebanon

The Archbishop Ieronymos II of Athens and all of Greece, had a meeting with the Ambassador of Lebanon, Dona Barakat, at noon.

The Archbishop welcomed Barakat and referred to the good relations between the two countries, expressing his regret for the great ordeal that Lebanon is going through, after the deadly explosion that struck Beirut.

The Ambassador announced that she was leaving Greece and thanked the Archbishop for the love and support of the Church to the afflicted people of Beirut. 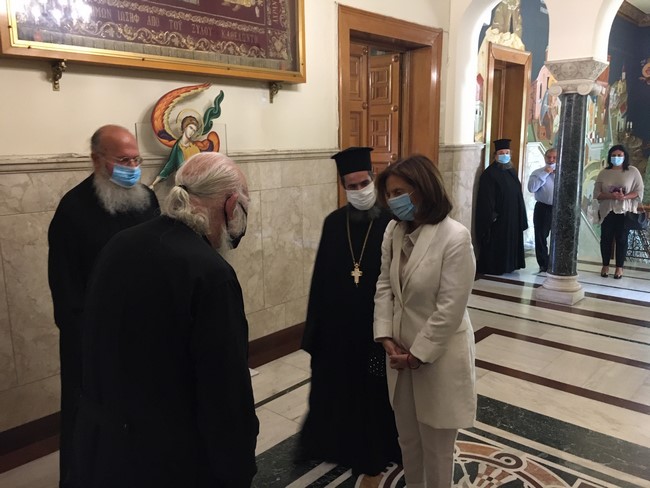 The Deputy Minister of Finance to Archbishop Ieronymos

Archbishop of Athens: Welcoming the stranger is an integral part of Christian heritage

Exaltation of the Holy Cross in Subotica

To a great joy of the faithful people of Subotica, Bishop Irinej of Backa celebrated the Holy Hierarchal Liturgy...

New warnings by Erdoğan: We are not guests in the Mediterranean but owners

New warnings towards Greece, Cyprus but also Armenia were stated by the Turkish President Recet Tayyip Erdoğan despite the...

Seismologists for Mount Athos: The history of the area does not allow us to be reassuring

The seismologists will remain on alert for the next 24 hours in order to monitor the evolution of the...

Intercession to the Theotokos in Adelaide

On the afternoon of Sunday, September 27, another fundraising event took place in the parish of St. Panteleimon in...