Lamentations of Most Holy Theotokos at Patriarchate of Jerusalem

Fore-feast of the Dormition, the Service of the Lamentations was held on Thursday morning, 27 August 2020, at the Patriarchate of Jerusalem.

This ceremony in honour of Theotokos is a part of the Status Quo of the Church of Jerusalem.

For this ceremony, the Hagiotaphite entourage, led by its Hegoumen His Beatitude the Patriarch of Jerusalem Theophilos, marched from the Patriarchate Headquarters down Via Dolorosa with short stops at the Holy Monasteries of St. Charalambos, Panagia Sayda Naya, Praetorion, The Ancestors of God Joachim and Anna and St. Stephen and arrived at the Hegoumeneion of Gethsemane.

Going down the stairs to the courtyard of the Church of the Dormition of Theotokos Mary, His Beatitude was received by the Hegumen His Eminence Archbishop Dorotheos of Avela and the Priests in their liturgical vestments with the co-celebrants their Eminences the Archbishops; Theophanes of Gerassa, Aristarchos of Constantina, Isidoros of Hierapolis and Philoumenos of Pella, at the chanting of Hierodeacon Simeon and Mr. Vasilios Gotsopoulos, He entered the Church and having given the blessing, He venerated the Tomb of Theotokos and put on His Patriarchal liturgical vestments. The Archbishops put on omophorion and epitrachelion and the Priests felonion.

Once everybody was ready the Priests took the Icon of the Body of the Dormition of Theotokos on the Epitaph and placed it in the centre of the Church.

“Your Beatitude Father and Master,

Your Excellency Consul General of Greece,

Most Reverend Chorea of Hierarchs,

During the Fifteen days of the Dormition fast the attention of the memory, the life and all activity of the Church are centred primarily and especially to the Most Holy Theotokos, the Mother of our God.

From the first day of August, there is a gradual increase of the supplications and all kinds of prayers dedicated to Her, who was chosen by God and became the vessel that held the Creator, contained the uncontainable, conceived by the Holy Spirit and bore as man our Lord Jesus Christ.

All events of honour, respect and reverence for the Most Holy Theotokos reach their climax on 15th of August, which has been set by the Church as the day of the commemoration of Her Dormition.

Celebrating the Fore-feast of the Dormition today, and the main feast tomorrow, we commemorate and recall the whole mission of the Most Holy Theotokos to us men. We commemorate that She accepted to lend flesh from Her flesh to the Word of God Who is without flesh. She conceived the Son of God through the Holy Spirit, became pregnant, went through labour and bore Him in the flesh, swaddled Him, breastfed Him, saw the Wise Men and the Shepherds offering gifts and worshipping Him at the humble Cave in Bethlehem, heard the hymns of the Angels in the heavens chanting “Glory to God in the Highest”, “kept all these words in her heart”(Luke 2:19) and handed all these over to the Evangelists and Apostles and they to the Church in turn. Theotokos led our Lord to circumcision and His naming on the eight-day since His Nativity in the flesh, and to His Entrance and the fortieth-day prayers at the Temple of Solomon, where Simeon the God-receiver held Him in his arms, and she heard in surprise the words “ Lord, now lettest thou thy servant depart in peace”(Luke 2:29) and “a sword shall pierce through thy own soul also”(Luke 2:35). Moreover, She held Him in her arms fleeing from Herod’s fury to Egypt and brought Him back to Nazareth again, where they dwelled and from which He was called Nazarene. She followed and watched Him and as a Mother gave Him all He needed in His childhood and youth, when “Jesus increased in wisdom and stature, and in favour with God and man”(Luke 2:52).

Having witnessed all these, and the thing that was beyond any human logic, His conception and bearing without the consummation of conception with a man’s participation, it was natural to say to the servants of the wedding in Cana “Do whatever He tells you to do”(John 2:5). She followed and served Him along with the women who were following Him from Galilee, and “ministered unto him of their substance” (Luke 8:3). She was a witness of the signs and miracles of comfort and healing of the sick, felt the joy for these and the sorrow of the ungrateful condemnation and of the vision of Her beloved Son pierced with the nails of the Cross. She was the first among the Myrrh-bearing Women at the Deposition and the burial, but also at the joy of the Resurrection and at His other appearances after the Resurrection. She experienced the sorrowful-joy of the Ascension and the joy of the sending down of the Holy Spirit the Comforter to Her and to the Apostles by Her Son.

For this mission of Hers, which is beyond any human logic and marvellous, for the unique event which happened once and for all, the faith, the devotion, the love, the complete consistency to Her promise to the Angel at the Annunciation “Behold the handmaid of the Lord; be it unto me according to thy word”(Luke 1:38), the Church throughout the centuries, honours and magnifies Her, as She foretold at her meeting with her relative Elizabeth “behold, from henceforth all generations shall call me blessed”(Luke 1:48), accepts Her natural death, and burial in this village of Gethsemane, but also Her translation (metastasis) by Her Son in both soul and body into heaven before the common Resurrection, and Her presence as a Queen at His Right Hand, “arrayed in a vesture of inwoven gold, adorned in varied colours”(Psalm 44: 8), being the first among the members of the triumphant Church, ready to hear the supplications of those who revered Her, to help, support, heal the illnesses, overcome difficulties and temptations, and most of all to set an example with Her Most Holy fife for us.

For Her excessive goodness and love, the Church of Jerusalem, the land where She lived and which She sanctified, honours Her, as it should today, with this Service of the Lamentations around Her Tomb, under the lead of His Beatitude our Father and Patriarch of Jerusalem Theophilos, and prays to Her to intercede for the unity in Christ of the Orthodox Churches, for the peace and good state of the whole world and of the Middle East, for the cessation of the brutal crimes of violence against innocent people and of the existing wars around the globe, for the rescue and treatment of shipwrecked refugees, for the help of the addicted to drugs youth, for the unity of the divided families and for the help of all of us who honour Her today at Her Most Sacred and Life-giving Tomb, so that by Her help we may continually convey a message of reconciliation and love to the world, and a witness of the Christian Orthodox life, to strengthen, comfort, sustain and guide to salvation the fulness of the Church and give Glory to our Trinitarian God. So be it.”

This was followed by Eulogitaria, Praises, Doxology, the procession of the Epitaph to the top of the staircase of the Church and the prayer.

Finally, the icon was placed behind the Tomb of Theotokos under the chanting of the Dormition hymns and a large crowd of faithful approached to venerate it, despite the COVID-19.

After the Service, the Hegoumen His Eminence Archbishop Dorotheos of Avela offered a reception at the Hegoumeneion. 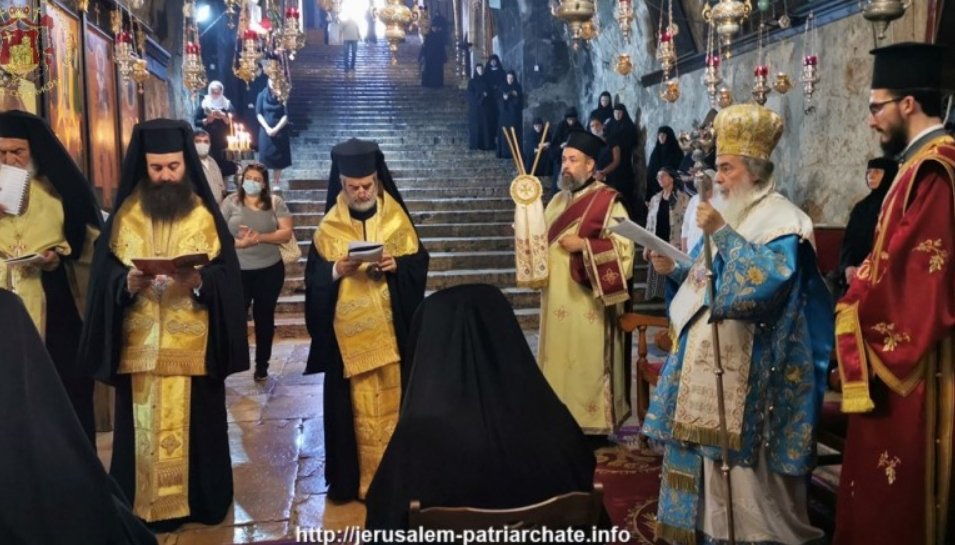 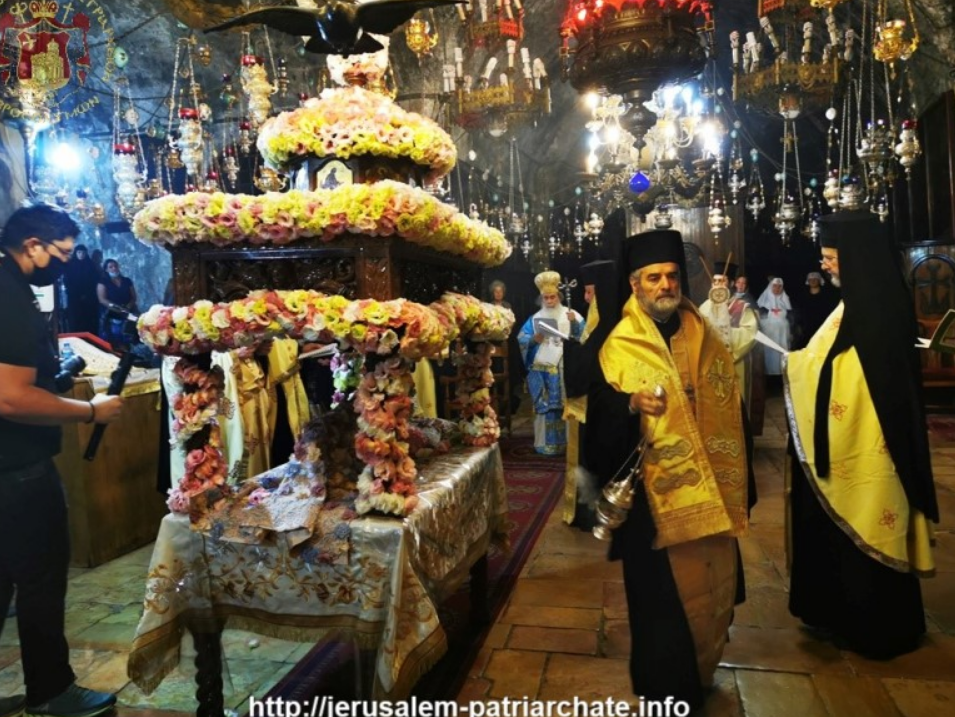 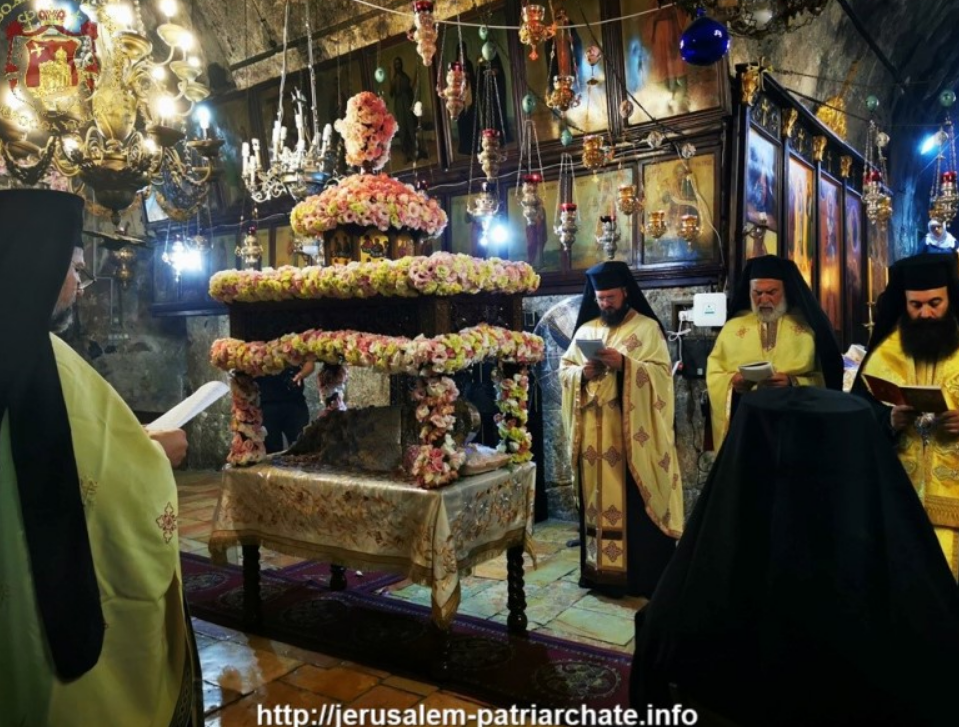 Commemoration of Holy Ancestors of God, Joachim and Anna, at Patriarchate of Jerusalem

Visit of the Patriarch of Jerusalem at the ruins of the H. Church of St. Stephen in Ramallah

Government spokesperson Stelios Petsas categorically ruled out the possibility of the demilitarisation of the islands in an interview on...

The life of Gloria Buzau’s midfielder who proves that sport and faith do not make a discordant note became...

The Patriarchate of Jerusalem celebrated on Saturday, 26 September 2020, the commemoration of the Consecration of the Church of...