On Tuesday, May 10, 2022, Jordan Perry of the Ministry of Foreign Affairs of G. Britain visited the Patriarchate of Jerusalem.

The political analyst Perry was received by Patriarch Theophilos of Jerusalem and Hagiotaphite Fathers. At this meeting, the Patriarch of Jerusalem explained to the political analyst the situation that the Churches of Jerusalem and their faithful members have been facing recently, due to the pressures from the radical elements of Ateret Cohanim, who had recently seized the “Little Petra” hostel and some years ago they also seized and still hold to this day the guest house of Saint John near the Church of the Holy Sepulchre.

Patriarch Theophilos also referred to the difficulties the Churches and especially the Rum Orthodox Patriarchate of Jerusalem faced on Holy Saturday, at the Service of the Holy Light. These were the Police restrictions, following a Governmental law, which reduced the number of incoming faithful to the minimum, resulting in the inability of the faithful Christians to enter the Church of the Holy Sepulchre. The reason behind these situations is that the Jewish people lack knowledge of the Christian cultural heritage.

These difficulties are dealt with by each one and altogether the Churches, and with their meetings that took place at the Rum Orthodox Patriarchate of Jerusalem under the care of Patriarch Theophilos.

Perry was attentive to the Patriarch’s words and promised to contribute to the solving of this situation with all the available means in his power. 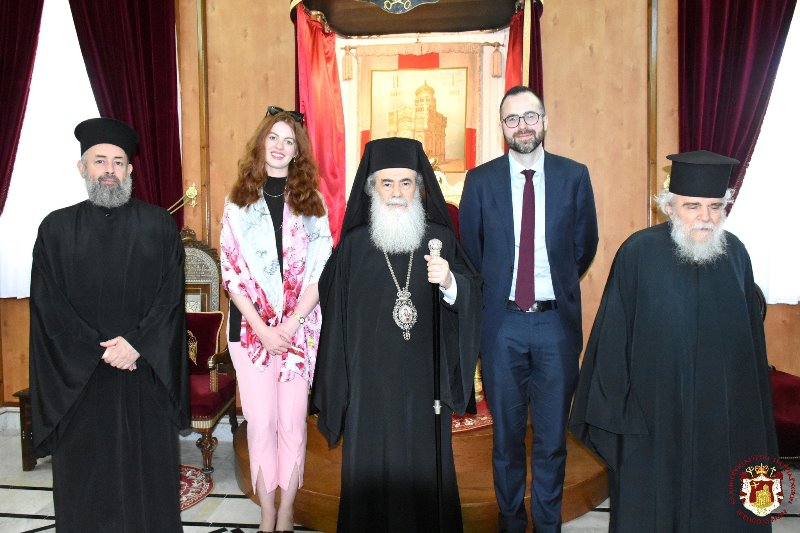