Saint Clement, who was from Ancyra in Galatia, was the son of an unbelieving father, but a believing mother whose name was Sophia. At first he lived as a monk, later he became the bishop of his city.

He suffered so many things in confession of the Faith in Christ, that the time of his sufferings and struggles stretched out over a period of twenty-eight years. Finally he and Saint Agathangelus (who was from Rome) were beheaded together during the reign of Diocletian and Maximian, in the year 296.

Clement was born in the year 258 A.D. in the city of Ancyra of a pagan father and a Christian mother. His devout mother, Euphrosyne, prophesised that her son would die a martyr’s death; then she herself departed this world when Clement was twelve years old.

Her friend Sophia took Clement into her home as a son, and assisted in rearing him with a Christian spirit. Clement was so famous for his virtuous living that he was elected Bishop of Ancyra at the age of twenty. In his youth he attained the wisdom of a mature adult, and by great abstinence he tamed and conquered his body. Clement fed on bread and vegetables only, and did not eat anything butchered or bloody.

During the reign of Emperor Diocletian, he was tortured horribly, “as no one had ever been, since the beginning of the world.” He spent twenty-eight years in torments and in dungeons. Eleven different torturers tormented and tortured him.

At one time, when they struck him in the face, spat upon him and broke his teeth, he cried out to Domentian, his torturer: “You are doing me great honor, O Domentian, and you are not torturing me, for the mouth of my Lord Jesus Christ was also beaten and struck in like manner–and behold: I, the unworthy one, have now been made worthy of this!”

When Clement was brought to Rome before Diocletian, the emperor placed various weapons of torture on one side, and on the other side such gifts as medals, clothing, money and all that the emperor could bestow. Then he told Clement to choose. The martyr of Christ glanced with scorn at all the emperor’s gifts and chose the instruments of torture.

Clement was indescribably tortured: piece by piece they removed the flesh from his body, so that the white bones showed beneath the flesh. Healed of these wounds, he was beheaded by a soldier in the church in Ancyra, while he was celebrating the Divine Liturgy as bishop, in the year 312 A.D. The miracles of St. Clement are without number.

Thou didst blossom forth for the faithful, O most sacred Clement, as a branch of holiness, a staff of contest, a most sacred flower, and a sweet God-given fruit. But as a fellow-sufferer of martyrs and a fellow-prelate of hierarchs, intercede with Christ our God that our souls be saved.

As an honored branch of Christ, Who is the True Vine, all-famed Clement, thou didst win thy many contests for the Faith, crying with them that had shared thy pains: Christ is the Martyrs’ exceedingly radiant joy. 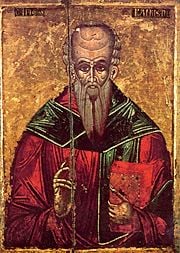 Memory of the thirteen monks of the Kantara Monastery in Cyprus

Let us love the truth

Memory of our Holy Father Germanos of Constantinople

Mount Athos: Five monks passed away due to coronavirus within ten days at the Holy Monastery of Philotheou