Hagiographies were placed in Stockholm Cathedral of Saint Georgios

From the very first day of his ministry in the historic Diocese of the Ecumenical Patriarchate in Scandinavia, Metropolitan Cleopas of Sweden and All Scandinavia recognized the need for placing hagiographies in the Stockholm Cathedral to prevent its deterioration or alteration.

Prior to that, however, the church had to be thoroughly repaired, both externally and internally, to protect the wall construction from moisture and other hazards that can be found in historic buildings, such as Stockholm Cathedral that was built in 1890.

On April 13, 2019, the Androutsos brothers and their collaborator Spyridon Metsis visited the Stockholm Cathedral to place the large hagiographic representation that can be found in the Museum of Greek Christian Heritage and depicts the enthroned Despot Christ surrounded by angels.

The famous hagiographers remained in the Cathedral until April 18, 2019, so that, among other works, they could measure the frescoes of the Holy Step, the internal entrance of the Cathedral.

It was already preceded by the painting of the chapel of the Hermitage of Saint Nikolaos in Rättvik, Sweden (the placement of the icons of the iconostasis in December 2015, and the frescoes of the Holy Step in December 2016 and 2017).

On October 4-8 2021, the Archangels Michael and Gabriel and six icons, with representations of Hierarchs were placed in the Stockholm Cathedral on either side of the old Holy Table in the niche of the Sanctuary.

The originality of these representations lies in the fact that in the background of each Hierarch there is a feature associated with the place he served.

In the frescoes of St. Chrysostom and St. Gregory the Theologian, Hagia Sophia can be seen, in Basil the Great, the mountains of Caesarea in Cappadocia, in Athanasios the Great and in St. Kyrillos, the lighthouse of Alexandria and in Saint Nektarios, the Monastery of Saint Trinity of Aigina.

At the inner entrance of the church, there is the representation of the life and martyrdom of the patron saint of the church, the Great Martyr George the trophy-bearer, whose presence was very intense in every step of the work, guiding and inspiring this labyrinthine effort.

Above the doors of the vicar’s office and the entrance of the vestibule were placed, in pairs, the four Evangelists, at the ends the representations with six angels, while on either side of the inner main entrance were chosen four great saints: Demetrios the Myrrh-gusher, Minas the Wonderworker, Saints Theodoroi, Tiron and Stratilatis. The icon of the Despot Christ was placed at the pulpit.

The selection of these representations with the specific depictions of Christ at a young age, according to His human condition, was made for the reason that in this space will be hosted the students of the Sunday School of the church and the youth department.

At the end of the Sunday Eucharistic Meeting of October 10, 2021, Metropolitan Cleopas referred in his speech to the above event, with indicative testimonies of the Great Fathers of the Church about the holy icons.

He also glorified the name of the Triune God, who claimed the local Church worthy to the moral and material support of its members and supporters, to place the first frescoes in the Cathedral, and asked Him to give enlightenment and vision to continue these initiatives with more projects of intellectual nature. 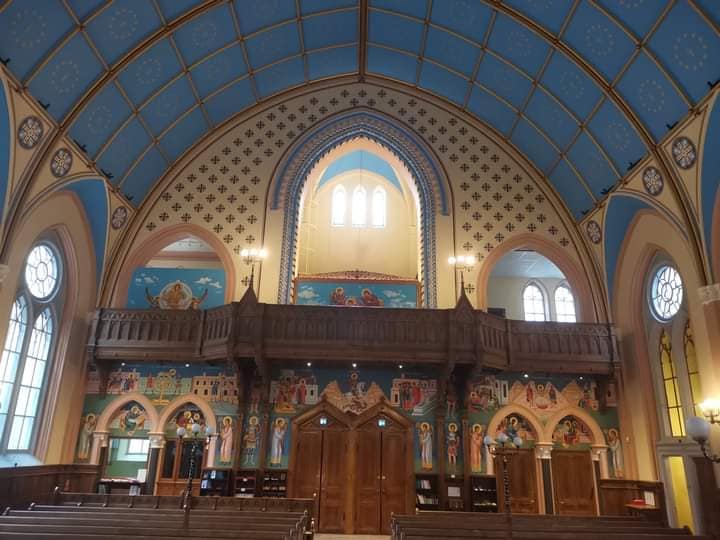 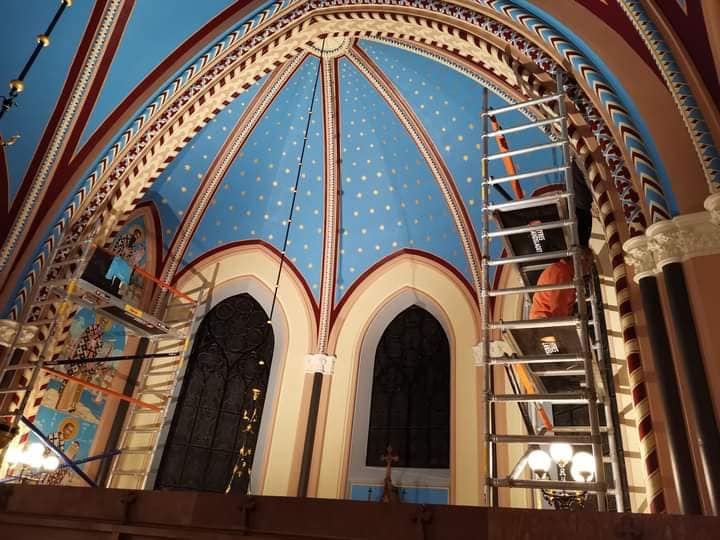