The National Anthem of Greece consists of the first stanzas of the poem “Hymn to Freedom”, written in May 1823 on the island of Zakynthos by the poet Dionysios Solomos.

The poem was published in Mesolonghi one year later and was included by French historian Claude Charles Fauriel in a collection of Greek folk songs.

It was set to music in 1828 by Nicholas Mantzaros, a Corfiot musician and friend of Solomos’, who based the melody on a folk theme intended for a four-voice male choir, instead of a military march. After that, the “Hymn to Freedom” was regularly sung and performed during national holidays.

In 1844 the poem was once again set to music by Mantzaros and submitted to King Otto in the hopes that he would accept it as the national anthem.

In 1861 the Minister for the Military asked Mantzaros to compose a march based on the “Hymn to Freedom”. The musician altered the rhythm of Solomos’ hymn, giving it the rhythm of a march and in 1864, after the union of the Ionian Islands with Greece, the “Hymn to Freedom” was established as the national anthem. The national anthem, along with its music, was printed for the first time (27 copies) in London in 1873.

We knew thee of old,
Oh, divinely restored,
By the lights of thine eyes,
And the light of thy Sword,
From the graves of our slain,
Shall thy valour prevail.

The poem “Hymn to Freedom” consists of 158 stanzas, of which only the first 24 were integrated into the National Anthem. The first two stanzas are the ones usually played to accompany the raising and the lowering of the flag, and performed on official occasions. During the playing of the national anthem, one should stand at attention.

(The Hellenic National Anthem. A translation in English by Rudyard Kipling, 1918)

We knew thee of old, O, divinely restored, By the lights of thine eyes, And the light of thy Sword.

From the graves of our slain, Shall thy valor prevail, as we greet thee again, Hail, Liberty! Hail! 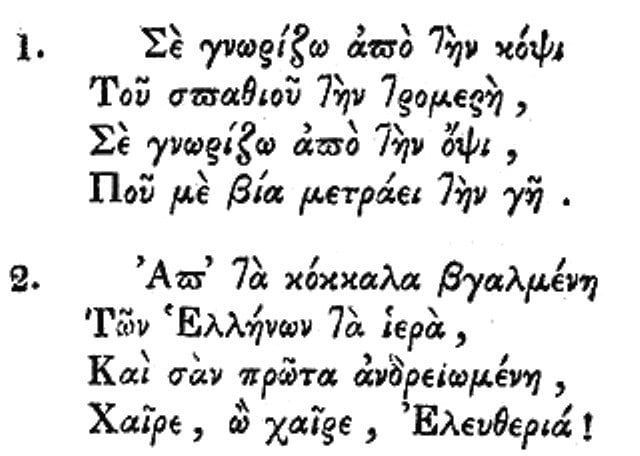 The European Union today expressed frustration over the escalation of tensions with Russia through its diplomatic representative and described...

The Great Akathist Service at the Patriarchate of Antioch

Patriarch John X of Antioch celebrated the Great Akathist Service at Our Lady of Balamand Patriarchal Monastery Balamand, on...

Thriving Greek Diaspora in US, Canada

From antiquity to modern times, the Greeks of the Diaspora have enriched the international community in the fields of...

Patriarch of Serbia presided over Diocesan Council held in Zagreb

Patriarch Porfirije of Serbia, the administrator of the Diocese of Zagreb-Ljubljana, served a prayer of supplication in the Cathedral...

On Sunday, April 18, 2021, Archbishop Nikitas of Thyateira and Great Britain presided over the sixth Lenten Vespers at...