On Sunday, November 21, 2021, the Patriarchate of Jerusalem celebrated the feast of the Synaxis of the Archangels Michael and Gabriel and all the heavenly hosts.

With the word “Synaxis”, we mean the gathering of us faithful, to honour the Marshals of the Angels and all the Angels who joined them when Archangel Michael said “Let us stand firm” and did not follow the fallen Lucifer and the angels that fell with him.

The feast was celebrated:

In the seaside town of Yaffo at the Holy Monastery of Archangel Michael which was renovated a few decades ago by its Hegoumen Most Reverend Damascene of Yaffo, when it was destroyed by a fire.

There, the Divine Liturgy was officiated by Patriarch Theophilos of Jerusalem with the co-celebration of Metropolitan Kyriakos of Nazareth, Archbishop Aristarchos of Constantina, Archbishop Damascene of Yaffo, Metropolitan Joachim of Helenoupolis, Archbishop Philoumenos of Pella, Archbishop Aristovoulos of Madaba, Hagiotaphite Hieromonks among whom the Elder Kamarasis Archimandrite Nectarios, Archimandrites of the neighbouring Parishes, Niphon, Marcellus and Artemios, and Archdeacon Mark, at the chanting of the Community Byzantine choir in Arabic. The Liturgy was attended by a congregation of Palestinians, Russians and Romanians, the Ambassador of Greece in Israel Mr Kyriakos Loukakis.

The Patriarch delivered the following Sermon to this congregation:

“The Lord hath prepared his throne in the heavens, and his kingdom ruleth overall. Bless the Lord, ye his angels, that excel in strength, that do his commandments, hearkening unto the voice of his word. Bless ye the Lord, all ye his hosts; ye ministers of his, that do his pleasure” (Psalm 103:19-21), the psalmist proclaims.

The grace of the Holy Spirit has gathered us all in the holy monastic Church of the Holy Archangels Michael and Gabriel to celebrate and honour their synaxis in Eucharist.

The Angels, as the Scripture says, are the heavenly hosts and the ministers of God, that do His will (Psalm 103:21). God makes His Angels fast and thin like the wind, and the ministers that serve Him, bright and energetic like the flame of the fire, Saint Paul preaches: “Who maketh His Angels spirits, and his ministers a flame of fire” (Hebrews 1:7). These Angels are greater than the feeble men in power and strength. “Whereas angels, which are greater in power and might…” (2 Peter 2:11), Saint Peter says.

According to Saint John Damascene, “God is the maker and creator of the Angels since He brought them from non-being into being and created them according to the image that is closer to Him, as a bodiless nature, something like a spirit or an immaterial fire, as Holy David says; “Who maketh his angels spirits; his ministers a flaming fire” (Psalm 104:5). An Angel, therefore, is a noetic substance, malleable, autonomous, bodiless minister of God, who has received immortality in his nature by grace, of which substance only the Creator knows the kind and the make. However, the Angel is called bodiless and immaterial when compared to us humans; because everything that is compared to God, the Only incomparable, is found to be thick and material; truly immaterial and bodiless is only the divine”.

The heavenly hosts, namely the Angels, are distinguished in nine orders within three groups according to Theologian Saint Dionysius the Areopagite, to whom Saint John Damascene refers by saying: “Just as Saint Dionysius the Areopagite says: ‘All theology, namely the Holy Bible, calls the heavenly hosts nine, and Saint Dionysius separates these in three groups of three. And he says that the first is the one near God and in close and immediate union with God, according to the tradition the one that has the six-winged Seraphim and the many-eyed Cherubim and the All-holy Thrones, while the second is that of the Dominions, Virtues and the Powers and the third and last is that of the Principalities, the Archangels and the Angels”.

It is noteworthy that according to Saint John Damascene, who again quotes Saint Gregory the Theologian, the angels were created before all other creation. “At first [the Creator] thinks of the angelic hosts and the heavenly and the thought becomes action”.

In today’s celebration of the synaxis of the bodiless hosts, and especially of the Archangels Michael and Gabriel, the Archangel Michael has a prominent position, because as a Marshal, in both the Old and the New Testament, he has displayed many benedictions to the humankind, according to his synaxarist.

Archangel Michael, my dear brethren, is the one who having seen the renegade angel, namely satan, fallen, he gathered all the orders of the Angels and saying ‘Let us give heed’, he praised the Lord of all in a loud voice as if saying; Let us all [the angles] who are created be careful and pay attention to what has happened to those who had been light with us and now they have turned into darkness.

This event, of the gathering of the orders of the Angels by Archangel Michael, was called Synaxis of the Angels, that is attention and concord and union. That is why the hymnographer says: “O Marshal passing glorious, O divine leader Michael, thou wast appointed by God’s will to be the chief and foremost of the Authorities, Powers, Dominions, Thrones, and Angels, Archangels, Principalities, wherefore as thou now standest at that dread Throne, guard and keep and save and protect and shelter all them that honour thee with faith, who art the world’s defender” (Matins, Exapostilarion 3).

The Marshal Michael’s command ‘Let us give heed’ is timely and is addressed to us who live in the modern age of globalization and the so-called “New Order”, that is, in the age of ” will worship” (Col. 2:23) which consists in resisting the truth by people with a corrupt mind and untested in faith as Saint Paul says (ref. 2 Timothy, 3:8).

We, my dear brethren, hearkening to the words of our Lord: “I beheld Satan as lightning fall from heaven” (Luke 10:18), let us say along with the Archangel Michael the angelic victorious hymn, “Holy, Holy, Holy, is the Lord Sabaoth, the earth is filled with His glory” (Isaiah 6:3). Moreover, let us proclaim with the hymnographer: “Wherever thy grace casteth its shadow, O Archangel, thence is the power of the devil driven away, for fallen Lucifer cannot bear to stand before thy light. Wherefore, we implore thee to extinguish his fiery darts that are cast against us, and by thy mediation deliver us from his stumbling-blocks, O praiseworthy Archangel Michael” (Matins, Praises, Glory). Amen. Many happy returns!”

At noon Archbishop Damascene of Yaffo hosted a meal for the Patriarchal Entourage.

At the Holy Monastery of the Archangels in Jerusalem

On Saturday afternoon, Vespers was observed by the Hegoumen and renovator of the Holy Church, Archbishop Demetrios of Lydda, and on Sunday morning the Divine Liturgy was celebrated by Metropolitan Isychios of Kapitolias, with co-celebrants the Elder Dragoman Archimandrite Mattheos, Archimandrite Makarios and Hierodeacon Simeon.

The chanting was delivered by the Hegoumen Archbishop Demetrios of Lydda, Monk Dositheos and Nun Kyriaki as the service was attended by a large congregation of Nuns and faithful from Jerusalem and the Consul General of Greece in Jerusalem Evangelos Vlioras.

The Hegoumen, Archbishop Demetrios of Lydda offered a reception to the Episcopal Entourage and the faithful. 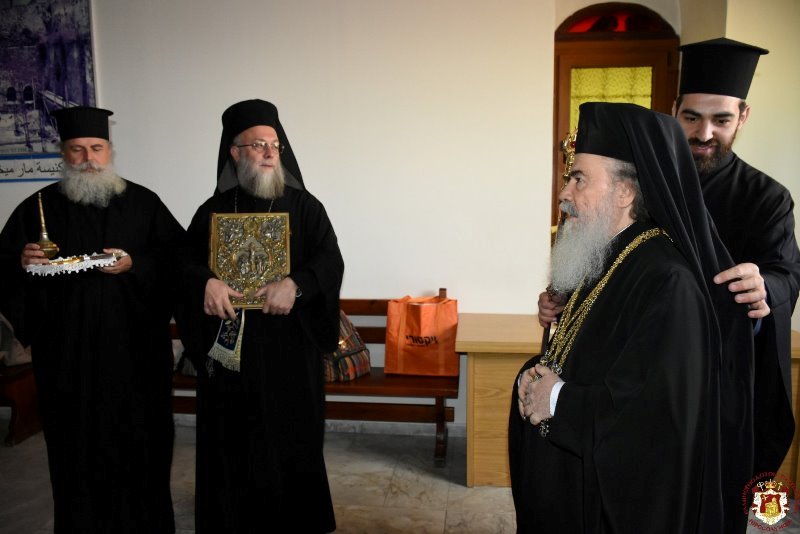 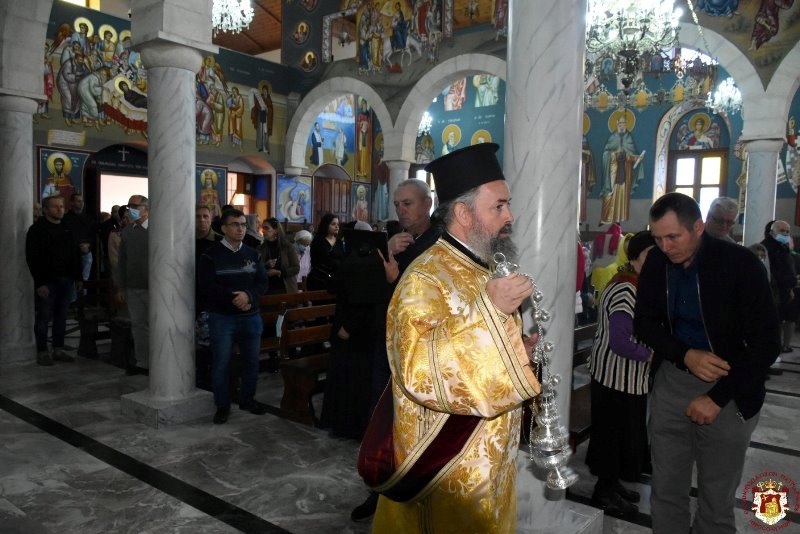 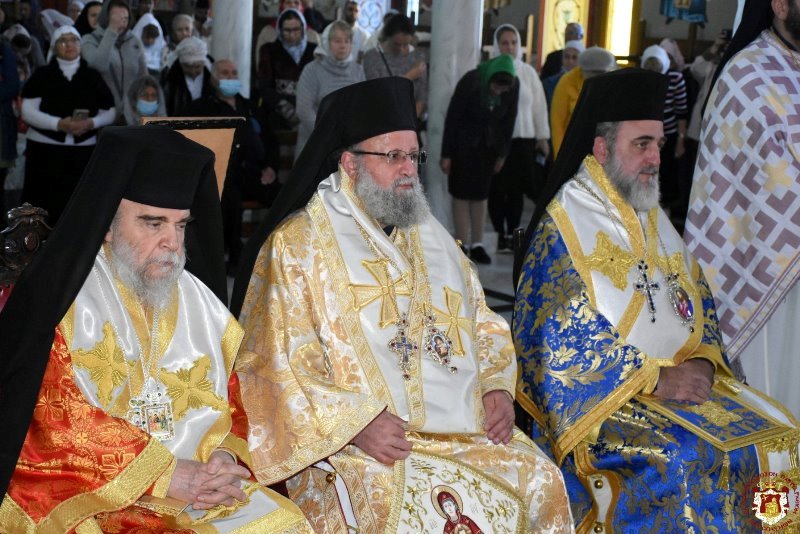 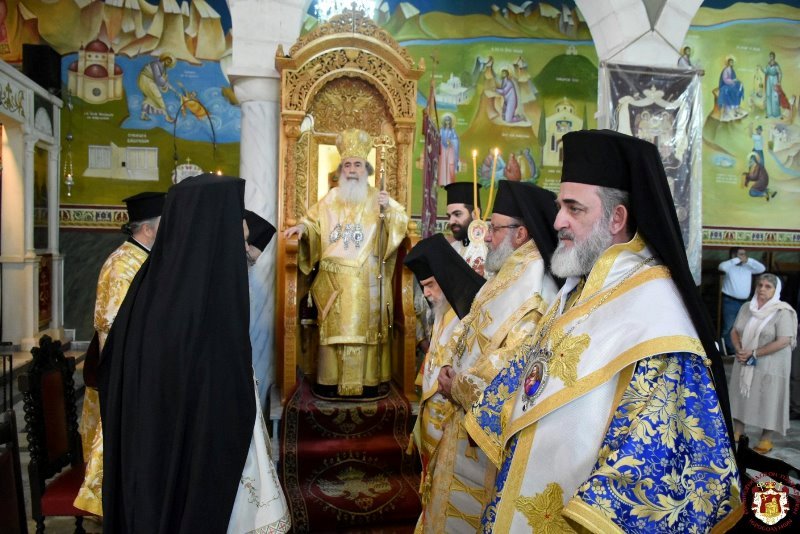 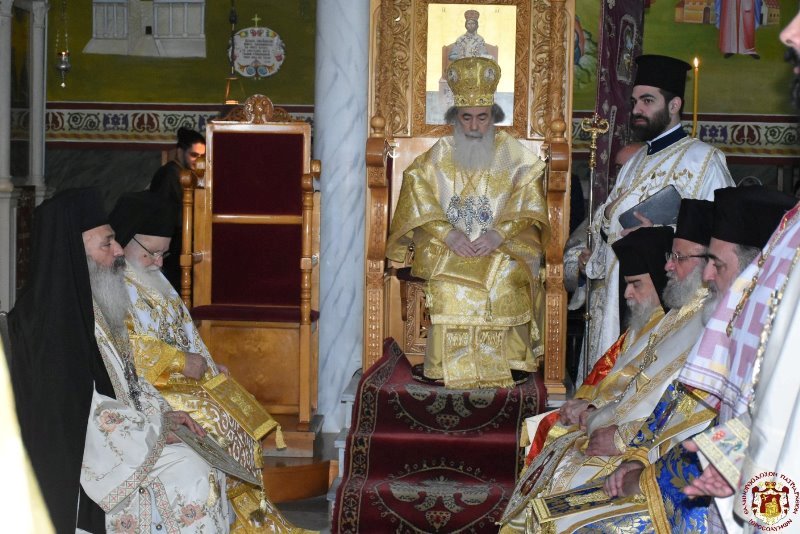 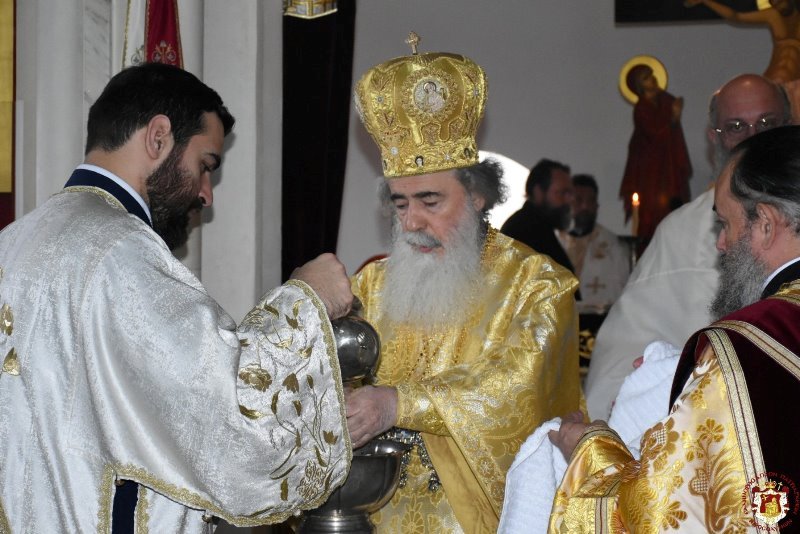 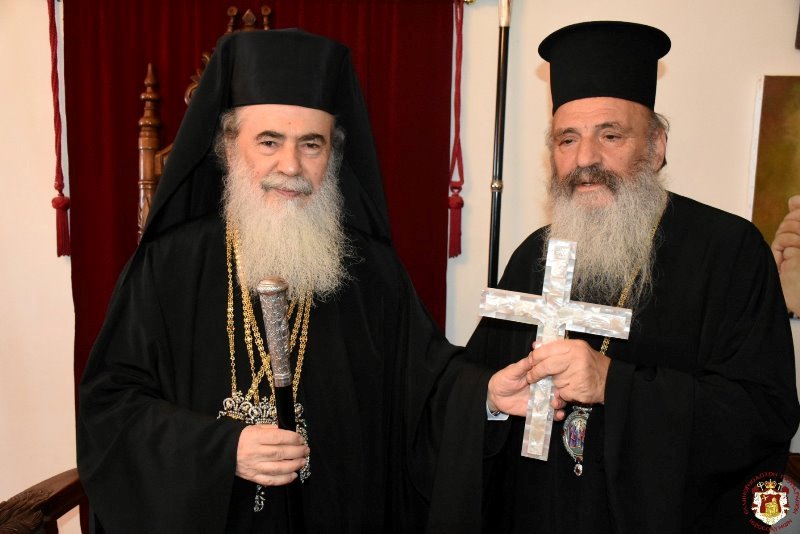 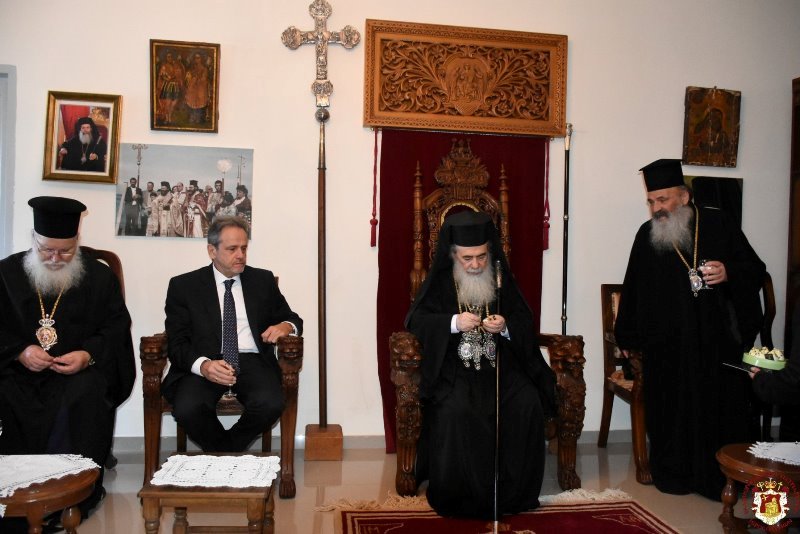 Two-year memorial service of the blessed Archbishop Gregory of Thyateira