On Monday, January 24, 2022, the Patriarchate celebrated the feast of Saint Theodosios the Cenobiarch at the Holy Monastery dedicated to him in the Judea desert, between Beit Sahour and the Lavra of Saint Savvas.

On this feast, the Church and especially the Church of Jerusalem commemorates that Saint Theodosios was born in Mogarissos of Cappadocia and came to the Holy Land in AD 451. He initially became a monk in a Monastery of the Jerusalem district, named after Ikelia. He lived in strict ascetic striving, in silence, prayer, and fasting in the Judea desert, until the desert monks recognized the virtuous and illumined man and asked him to undertake their spiritual guidance in a Holy Monastery.

Seeking the place to establish the Monastery, God revealed to him the area from which the Magi returned to their homeland, after worshipping the newly-born infant, Christ born in the flesh. The Saint founded a Monastery there, which gradually became a Coenobium, including four Churches and four hundred monks, who lived according to the coenobitic rules; common worship, common work, common meals, obedience to the Hegoumen, until they would be ready to enter a more difficult monastic style, that of the Lavra monks. In this Monastery, work was essential obedience, by which the monks sustained a home for the poor and a home for the elderly and weak. Therefore, the Monastery had a social role, and it also kept a school to educate the monks. This was the Monastery of the Patriarchs of Jerusalem, Saints Modestos and Sophrohios, and of the Leimonarion writer, John Moschos.

Saint Theodosios was of the same place, co-worker, and supporter of Saint Savvas. These two great Fathers worked in unison to establish the Christological Doctrine of the 4th Ecumenical Synod in Chalcedon (AD 451), according to which Christ has one hypostasis and two natures, the divine and the human. This was against the doctrine of the Monophysites who distorted the teaching of the Church.

Under the lead of Saint Theodosios in the Coenobitic life, the Monastery had a significant role along with the Lavra of Saint Savvas for the development of monasticism and the prevailing of the Orthodox Doctrine between the 5th and 7th centuries.

Some years in between there was a decline due to the raids. At the beginning of the 20th century, the Cretan monks Galaktion and Leontios came to live there. Around the middle of the 20th century the blessed Metropolitan Bartholomew of Madaba, who came from Krini of Asia Minor, constructed a new Church above the ruins of the previous one in the center of the Monastery. He was succeeded by the blessed Archimandrite Yakinthos and around 1965 by the current Hegoumen, Archimandrite Ierotheos, who has been serving there for more than 40 years. Archimandrite Ierotheos has done much work in the renovation of the Monastery, building a new wing, and has protected its property with many toils and pains.

At this historic Monastery, His Beatitude officiated a night-vigil with the co-celebration of their Eminences the Archbishops, Aristarchos of Constantina, Theodosios of Sebastia and Philoumenos of Pella, the Hagiotaphite Hieromonks, Eudokimos, Ignatios and Yusef, Archdeacon Mark and Hierodeacon Eulogios, under the chanting of Hierodeacon Simeon and Gotsopoulos.

Before the Holy Communion the Patriarch of Jerusalem delivered the following Sermon:

“The wilderness and the solitary place shall be glad for them, and the desert shall rejoice, and blossom as the rose. It shall blossom abundantly, and rejoice even with joy and singing: the glory of Lebanon shall be given unto it, the excellency of Carmel and Sharon, they shall see the glory of the Lord, and the excellency of our God” (Isaiah 35:1-2), the Prophet Isaiah says.

The true Light, the Holy Spirit, which was seen in the form of a dove at the river Jordan has gathered us all in this holy place of ascesis of our Holy Father Theodosios the Cenobiarch, the place of the Magi’s cave, to celebrate his commemoration.

During these holy and festive days of the Nativity of our Saviour Christ in Bethlehem, of the shepherds who kept the night watch in their fields, the Magi that came here with their gifts and the holy Theophany by the river Jordan, the deserts of Judea and Jordan are rejoicing indeed.

And the Jordan desert rejoices as the hymnographer says: “The true Light hath appeared, and He giveth enlightenment to all. Christ, Who surpasseth all purity is baptized with us; He bringeth sanctification into the water, and it becometh a place of cleansing for our souls. That which is visible is earthly, that which is perceived with the understanding is higher than the Heavens. Through washing cometh salvation and through water, the Spirit. By descending into the water, we ascend to God. Wondrous are Thy works, O Lord; Glory to Thee” (Minaion January 7, Praises, troparion 4). And the desert of Judea rejoices because, the similar to the angels’ manner of living of the God-bearing monastics, Euthymius the Great, Savvas the Sanctified, Theoktistos and Saint Theodosios the Cenobiarch, among many others, of whom I cannot say, “for the time would fail me” (Hebrews 11:32) was founded in it.

Our Holy Father Theodosios was a fervent zealot of the angelic city of heaven, and having left his hometown Mogarissos of Cappadocia, came to the Holy Land, to trod in the natural and spiritual footsteps of Christ our God, who came here in the flesh for the universal salvation. Once in Jerusalem and having venerated the life-giving Tomb of the Resurrected Christ, like another thirsty deer, he retreated to the great teachers of Christ and of the desert of Palestine, and at the feet of Saint Symeon the Styline from Antioch, by whom he was taught his future virtues.

The light-bearing Theodosios did this according to the psalmist’s words: “It is God that girdeth me with strength, and maketh my way perfect. He maketh my feet like hinds’ feet, and setteth me upon my high places. He teacheth my hands to war, so that a bow of steel is broken by mine arms. Thou hast also given me the shield of thy salvation: and thy right hand hath holden me up, and thy gentleness hath made me great. Thou hast enlarged my steps under me, that my feet did not slip” (Psalm 18:32-36).

Indeed, my dear ones, the education in Christ and the learning through an educational system, fatherly councils and trials from the traps and the cunning manners of the devil (cf. Eph. 6:11), strengthened Saint Theodosios and made him communicant of the unspeakable mysteries of God, an imitator of Saint Paul, “caught up to the third heaven…and heard unspeakable words” (2 Cor. 12:2,4). This is also confirmed by his hymnographer who says: “Thou didst secretly enter into the noetic darkness of the Divine Light, O all-blessed Theodosios; and having the doctrines of piety written on the tablets of thy heart by the finger of God, thou gavest them to thy disciples as a book of life” (Minaion Jan. 11, Matins, Ode 8, Troparion 4).

According to the established historian Cyril of Skythopolis, the blessed Theodosios was a defender of the healthy Orthodox faith, of the “doctrines of reverence” which were twisted by “men corrupt in mind and deprived of the truth” (1 Tim. 6:5), according to Saint Paul.

These were the “schismatic monks of the desert who did not have communion with the Catholic Church, but were under the quarrel and fallacy of Eutychus and Dioscorus”.

It is noteworthy that when the blessed Theodosios came to Jerusalem, during the reign of the God-pleasing Emperor Marcianus (AD 396-457), “he received the hospitality of some Logginos and old man of Cappadocia, of the Order of the Studious of the Holy Resurrection of Christ God”, which is the current Hagiotaphite Brotherhood. This old man, Logginos, received Theodosios and put him under the care of blessed Ikelia, who was building at the time the Church of the Old Kathisma of Theotokos…Ikelia took this young man Theodosios, as he was an intelligent singer and accepted him in the Order of the Studious [monks], who were very reverend; when the blessed Ikelia died, Theodosios undertook the leadership of the place.

Our Holy Father Theodosios was named Cenobiarch because, in this Monastery, which bears his name, he established a Coenobium, and “ever since, many retreated to him, asking to live with him and having accepted them [as monks], he guided them to the perfect will of God and God was always with him” and he was “a successful man” like Joseph (Gen. 39:2). In other words, Theodosios knew that God was with him and that all the things he does are blessed by God.

Let us entreat this great citizen of the desert and luminary of the world that by his prayers and those of the Most Blessed Theotokos and Ever-Virgin Mary, he may guide our mind and heart to the perfect will of God and our Saviour Christ. And along with the hymnographer, let us say: “Do not forsake your flock, most blessed Theodosios, but by your intercessions to the Lord [Who was baptized in the Jordan by John], pray that we may be saved”. Many happy and blessed returns. Amen”. 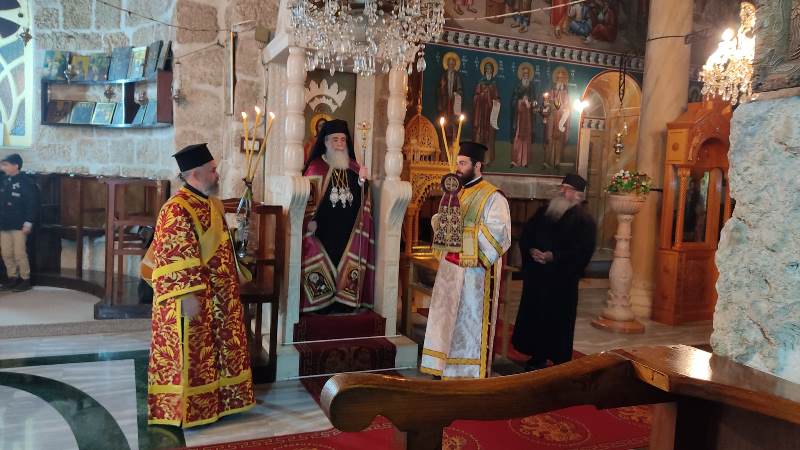 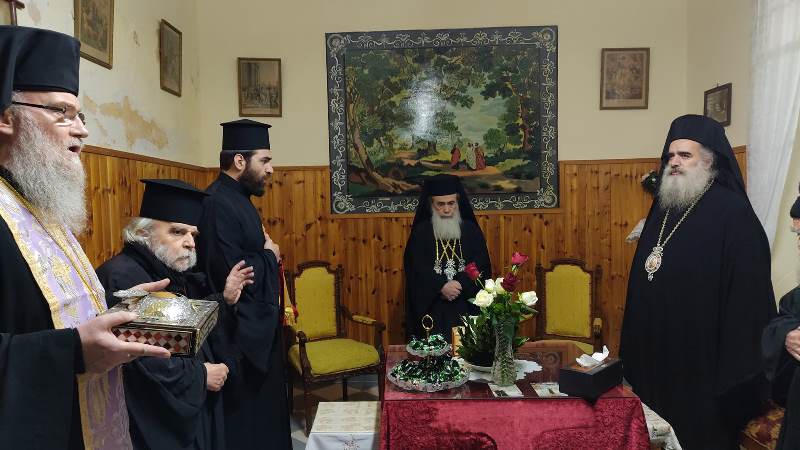 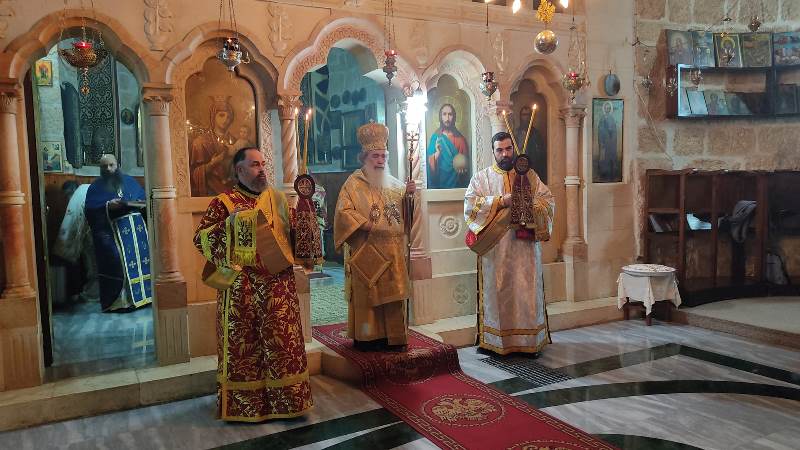