Our efforts came to fruition since Hagia Sophia became again a mosque, said Turkish President Recep Tayyip Erdogan upon his departure from the first official Muslim prayer in Hagia Sophia.

The Turkish president, accompanied by Devlet Bahçeli, stressed that the conversion of Hagia Sophia into a mosque did not let their nation wait long.

Finally, he stated that he hoped that Hagia Sophia would be able to serve all the faithful as a mosque, however, as he stated, “as a cultural heritage of all humanity, it is a place where people of all religions can come and visit it.”

President Recep Tayyip Erdogan arrived at Hagia Sophia shortly after 12:00, leading almost the entire Council of Ministers, along with his entire family, but also his government allies, for the first prayer after many years.

More than a thousand guests were inside Hagia Sophia, while outside thousands of worshipers are flocking gathereds shouting slogans in favor of the reopening of the symbol of Christianity as a mosque.

Many spent the night in the square, in front of Hagia Sophia, in order to secure space for the morning prayer.

An imam started the prayer, which was heard grom the Hagia Sophia’s minarets.

The entrance to the spaces of prayer is made after a thorough check, carried out in 11 different places, by a strong force of the Turkish police.

The mosaics of the Theotokos and Archangel Gabriel, 6.5 and 7.5 meters respectively, are hidden and revealed with curtains for one minute each. The original idea of ​​using lasers was eventually abandoned. 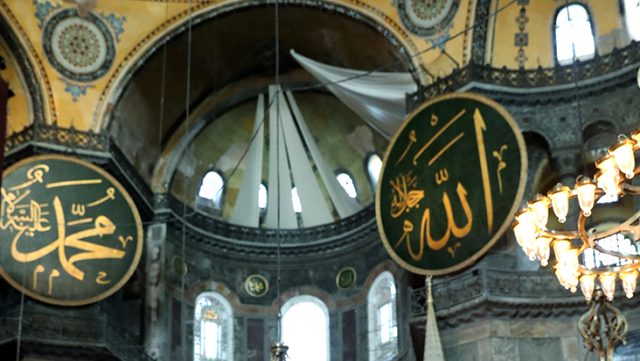 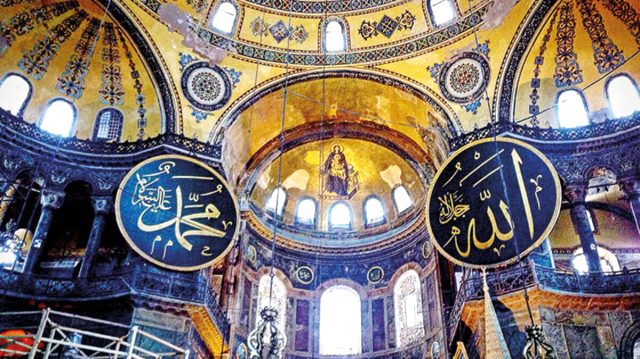 The omphalion (navel), the holiest part of the temple, was hidden with a prayer carpet. However, to prevent possible damage, there were two layers of felt under the carpet. The carpets that will be used in Hagia Sophia are produced in the western province of Manisa, in one of the first workshops in the country. Made 100% from local wool, the green carpets depict Ottoman representations.

The building is expected to accommodate 1,000 to 1,500 people. The prayer was said by Ali Erbaş. 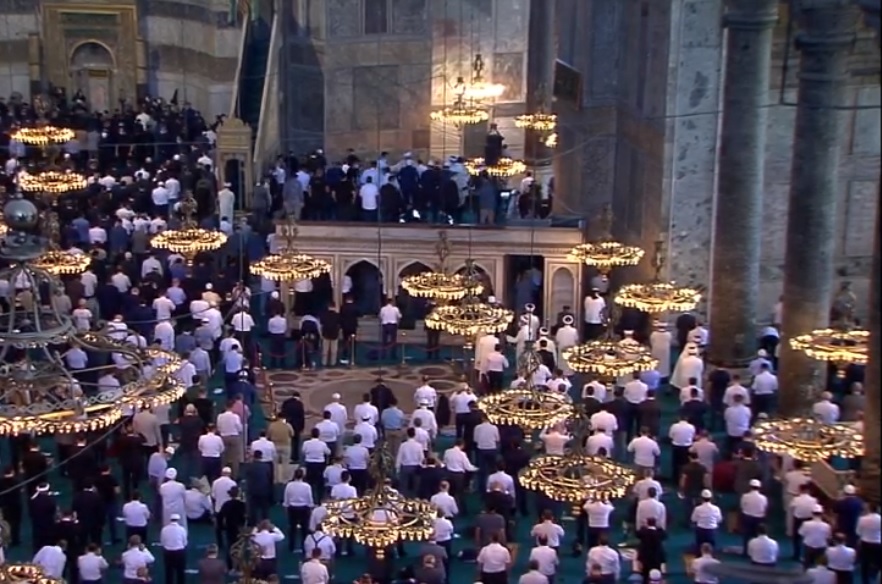 Turkish President: Conversion of Hagia Sophia into mosque is “crown” of 2020

Hagia Sophia was one of main reasons behind establishment of OPAC

The Turks build a toilet inside Hagia Sophia

New Archbishop of Suceava and Rădăuţi will be enthroned on Sunday