Ecumenical Patriarch: Orthodox Christianity has a long experience of cohabitation with other religions and denominations

“Orthodox Christianity has a long experience of cohabitation with other religions and denominations,” Ecumenical Patriarch Bartholomew said in his speech at the conference “Bahrain Forum for Dialogue: East and West for Human Coexistence”.

Ecumenical Patriarch Bartholomew, referring to the initiative for the conference, stressed that it seeks to underline the importance of interfaith dialogue and understanding among different cultures and diverse civilizations.

As he stressed, Orthodox Christianity has a long experience of cohabitation with other religions and denominations. However, this experience has not always proved peaceful or uncomplicated, especially when molded by the rise of nationalism in the second half of the 19th century, the clash of global geopolitical forces throughout the 20th century, and the rise of religious fundamentalism in the early 21st century.

“A series of historical events redefined the worldwide religious landscape, shaping the relationship of Orthodoxy to a pluralism of religions and reassessing its role on the global scene.

In this context, the Holy and Great Council of the Orthodox Church, convened on the island of Crete (June 2016) assumes great significance: “Honest interfaith dialogue contributes to the development of mutual trust and to the promotion of peace and reconciliation. The Church strives to make ‘peace from on high’ more tangibly felt on earth. True peace is not achieved by force of arms, but only through love that ‘does not seek its own’ (1 Cor 13:5). The oil of faith must be used to soothe and heal the wounds of others, not to rekindle new fires of hatred.” (Encyclical, par. 17).

The Ecumenical Patriarch noted that encounter and dialogue require commitment and determination at both the individual and the community level.

“All dialogue is personal since it involves the interaction of unique, irreplaceable persons, whose personhood is intimately connected to their unparalleled social, cultural, and religious particularities.

This does not mean denying one’s own faith, but rather adapting and enriching one’s own identity and self-consciousness in the perspective of openness to others. It can also heal and dispel prejudice and contribute to mutual comprehension and peaceful conflict resolution.”

In his speech, the Ecumenical Patriarch noted that prejudice has its roots in the misrepresentation of the other – which is precisely why dialogue is essential. Because it can dispel mistrust and suspicion.

According to Bartholomew, encounter and dialogue are only effective if undertaken in a spirit of inclusion, trust, and respect. Through dialogue, “we define our readiness to embrace difference. This spirit is concisely captured by a recent document approved by our Ecumenical Patriarchate and entitled For the Life of the World: Toward a Social Ethos of the Orthodox Church (2020). There, in paragraph 55, we read: “Knowing that God reveals himself in countless ways and with boundless inventiveness, the Church enters into dialogue with other faiths prepared to be amazed and delighted by the variety and beauty of God’s generous manifestations of divine goodness, grace, and wisdom among all peoples.”

Concluding his speech, the Ecumenical Patriarch stressed that the Patriarchate intends to lead by example, demonstrating how religious leaders should sustain and advance peaceful coexistence, justice, and equity.

Orthodox Christianity has found in common humanitarian efforts a genuine expression of the power of faith to promote co-existence, overcome crisis, and support an ethic of inclusiveness, an ethos of solidarity.

We have been for decades at the forefront of organizing and supporting interreligious conferences, aware that sincere dialogue can confront intolerance and violence while preventing the abuse of religion by fundamentalists and fanatics.”

The Ecumenical Patriarch also stressed that as “ministers of faith, we need at all times to build bridges. For over thirty years of our tenure as Ecumenical Patriarch, these are the principles we value not only for our own Church and Christianity in general but for all religions and humanity at large.” 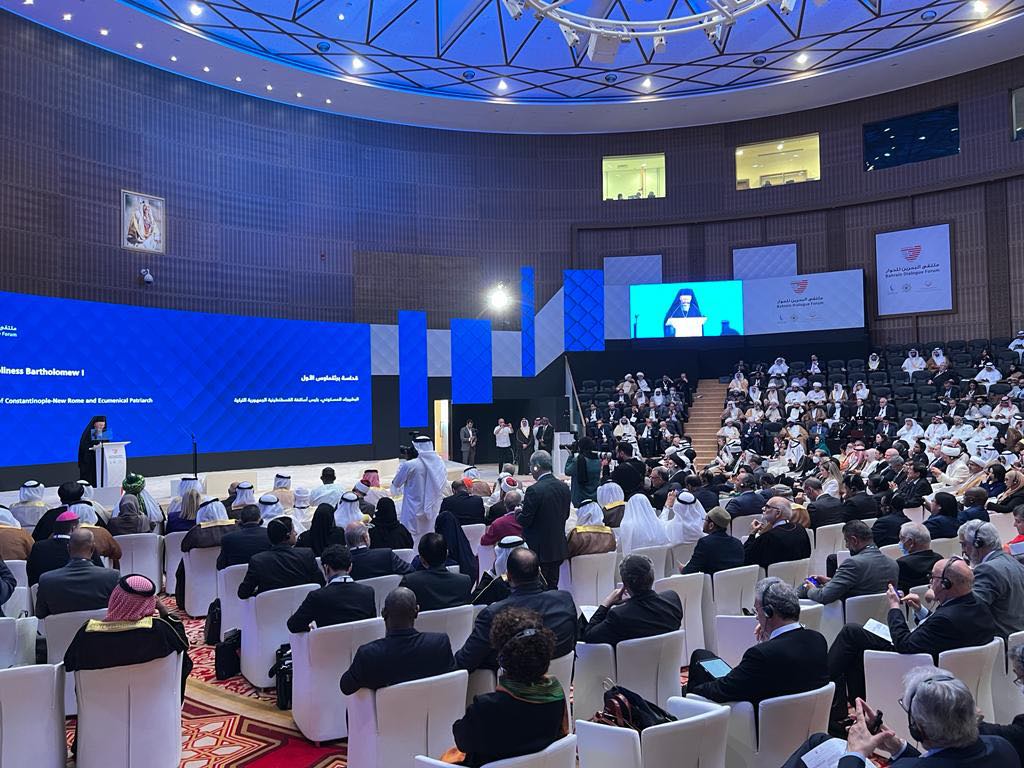 Medvedev: Russia is fighting a sacred battle against Satan