On Saturday evening, the Order of Saint Andrew, Archons of the Ecumenical Patriarchate, honored His Beatitude Theodoros II, Pope and Patriarch of Alexandria and All Africa, with the Athenagoras Human Rights Award.

This is the highest award of the Order of Lords of the Apostle Andrew of the Ecumenical Patriarchate which was established in 1986 and is awarded during the organization’s official annual dinner that has been taking place for at least the last two decades at the Hilton Hotel in Manhattan.

The annual award ceremony, which recognizes “a person or organization which has consistently exemplified by action, purpose, and dedication, concern for the basic rights and religious freedom of all people,” also coincided with the eighteenth anniversary of His Beatitude’s enthronement to the See of St. Mark.

Patriarch Theodoros’s missionary work in the Alexandrian Patriarchate has been widely regarded as visionary, and, In support of the Patriarch’s ministries, Archon National Commander Dr. Anthony Limberakis presented His Beatitude with a gift of $100,000, on behalf of the Order of St. Andrew, while Mr. John Catsimatidis, on behalf of the John and Margo Catsimatidis Foundation, likewise presented a matching gift.

As Dr. Limberakis explained in his remarks, Patriarch Theodoros has also “consistently stood by His All-Holiness Ecumenical Patriarch Bartholomew in fortifying Orthodox Unity,” and “courageously was the first primate of the 14 Autocephalous Churches to recognize the autocephaly of the Orthodox Church of Ukraine and acknowledged that the 41 million peace-loving citizens of Ukraine deserve their own religious freedom.”

Deputy Commander of the Order of Archons, Theodoros Bozanelis, Dr. Anthony Lyberakis, Archbishop Elpidophoros of America, and Ecumenical Patriarch Bartholomew spoke about the work and life of the honoree through the video message.

Although their speeches differed in content, they had many common characteristics as they praised, among other things, the missionary work of the honoree and the struggle for the human rights of all Africans, as well as his firm stance on the recognition of the Autocephaly of Ukraine, which provoked the reaction of the Patriarchate of Moscow and which proceeded in retaliation, violating the ecclesiastical jurisdiction of the Patriarchate of Alexandria in Africa.

In his statements, among others, the Patriarch of Alexandria referred to the Russian invasion of Africa, stressing that “they are coming to expel me from where? From our house? They come like wolves to snatch who? The destitute people.”

On his part, Archbishop Elpidophoros of America, referring to Patriarch Theodore, said that he knows this same persecution, which has been relentless, because of His stand for the good canonical order of the Church – supporting the Ecumenical Patriarchate’s decision to grant Autocephaly to the Orthodox Church of Ukraine, and thus, to restore millions of Ukrainians to the Canonical Church.

According to Archbishop Elpidophoros, who delivered the Encomium, we can trace His Beatitude’s inspiration for the defence of the Orthodox faith to the example set by His predecessors. Like Saint Athanasios the Great, the 20th Patriarch of Alexandria who endured persecution and exile for his defense of the Council of Nicaea, “our Patriarch Theodoros knows this same persecution, which has been relentless because of His stand for the good canonical order of the Church– supporting the Ecumenical Patriarchate’s decision to grant Autocephaly to the Orthodox Church of Ukraine, and thus, to restore millions of Ukrainians to the Canonical Church.

I think it is safe to say that His Beatitude is an admirer of the Slavic tradition; for He has much experience from his time as the Patriarchal Exarch in Odessa. He has had warm relationships with the Ukrainian and Russian Churches.

But because of His righteous stance, the Moscow Patriarchate – which is supporting full-on aggression and violence against the Ukrainian People, as well as the illegal seizure of Ukrainian lands by sham elections at gunpoint – has uncanonically invaded the Continent of Africa, which is the complete ecclesiastical domain of the Most Holy Patriarchate of Alexandria, ” said the Archbishop of America.

In fact, as a “direct response” to His Beatitude’s recognition of Ukraine’s autocephaly, the Moscow Patriarchate has “adopted” 102 clergymen of the Patriarchate of Alexandria from eight African countries and established a Moscow Patriarchal Exarchate in Africa, said Dr. Limberakis.

His All-Holiness Ecumenical Patriarch Bartholomew delivered a virtual acclamation in His Beatitude’s honor before the official presentation of the award. In his acceptance, Patriarch Theodoros dedicated the award to “all those who fight day and night for the assertion of all kinds of rights.”

“There are countless people who are wronged and oppressed in various ways,” he said. “A large number of these people live on the African continent, which is territorially and spiritually identified with our Ancient and Apostolic Patriarchate, the shepherding and steering of which I have had for eighteen consecutive years with the grace of the Triune God and the help of my collaborators in the Lord’s vineyard. I think this award belongs to them, too.”

Identifying the examples of Nelson Mandela, whose “situations forced him to rebel, to endure, to cry out until his vindication,” and Archbishop Iakovos, whose march on Selma with the Rev. Dr. Martin Luther King “won a forever place in the heart of every anti-racist and progressive person of his time,” Patriarch Theodoros said:

“I ask each and every one of you to please do whatever and in whichever way you can so that such situations remain a thing of the past. My spiritual children in many cases do not have the right to be considered as people with value, with gifts, with rights but only as productive machines.

Tolerance cannot and should not be perceived by the civilized West as acceptance and capitulation, not even as a habit. The rights of the people – especially minorities – were confirmed by the Lord Himself with His preaching, with His associations, with His actions. Conciliation with people of the “social fringe” during His space-time was not a random action, but it has its semiotics even in our day. It is a creature’s right to know its Maker.”

His Beatitude expressed his gratitude to all who welcomed him during his visit. He also announced that he would then bestow the title of “ταξιάρχης” of the Patriarchate of Alexandria upon Archbishop Elpidophoros and Dr. Limberakis, and presented a gift to Rev. Protopresbyter of the Ecumenical Throne Alex Karloutsos and to Mr. John Catsimatidis.

The audience was particularly impressed by the reference to the challenges that the Patriarchate of Alexandria faced and continues to face, the deprivation of human rights, and the fact that during the recent visit to Madagascar no child was wearing shoes.

Patriarch Theodore reciprocated by awarding the Order of the Brigadier General to Archbishop Elpidophoros of America and the Order of Saint Savvas to Dr. Anthony Lyberakis.

He then awarded a gondola to Fr. Alexandros Karloutsos and an eagle to John Katsimatidis in recognition of their support for the Patriarchate of Alexandria.

As reported by anamniseis.net the dinner was attended by about 600 expatriates – Archons with their families, as well as representatives of the greek diaspora.

The event was attended by the Ambassador of Greece in Washington, Alexandra Papadopoulou, Archbishop Elpidophoros of America, the former Archbishop Dimitrios of America, other archpriests of America and the Patriarchate of Alexandria, the Consul General of Greece and Cyprus in New York, Konstantinos Konstantinou and Michalis Fyrillas, respectively, the Greek Consul Dimitrios Papageorgiou, the federal MPs Gas Bilirakis and Nikol Malliotakis, the Permanent Representative of Greece to the UN, Maria Theofili, the Consul General of Panama, Georgia Athanasopoulou, Catherine Fleming, the Supreme President of the AHEPA, Dimitrios Kotas and other representatives. 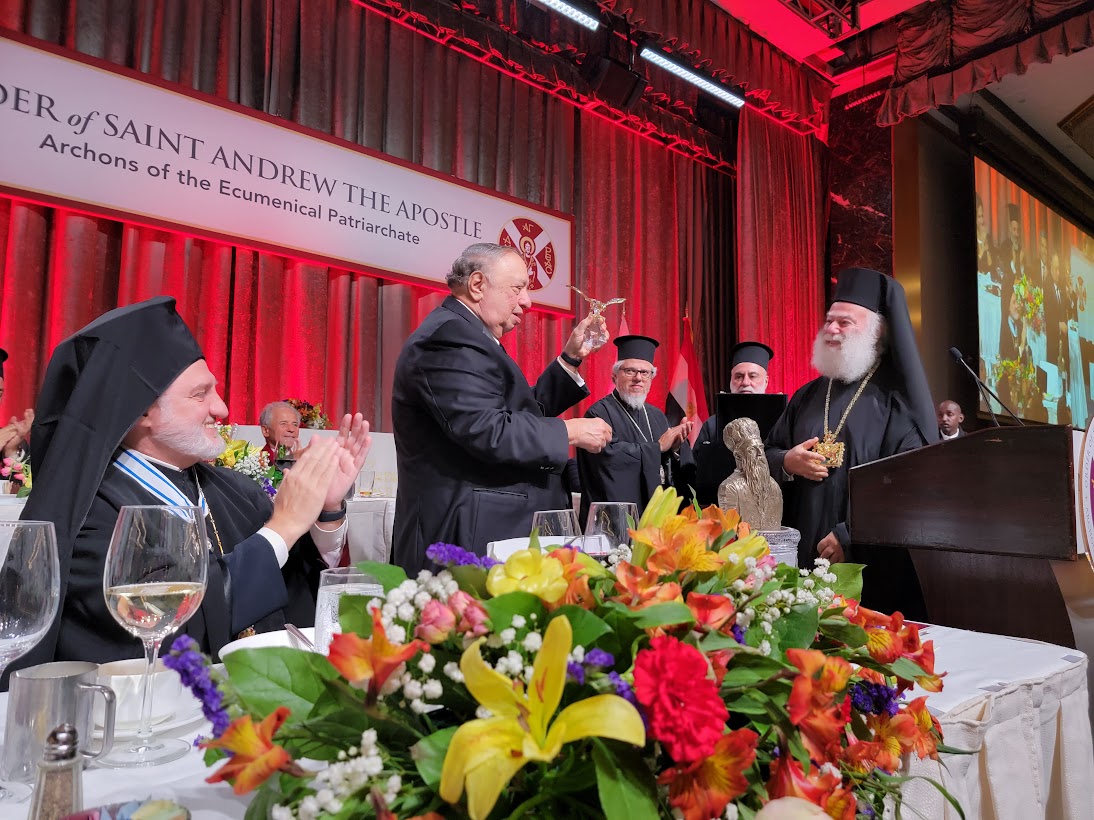 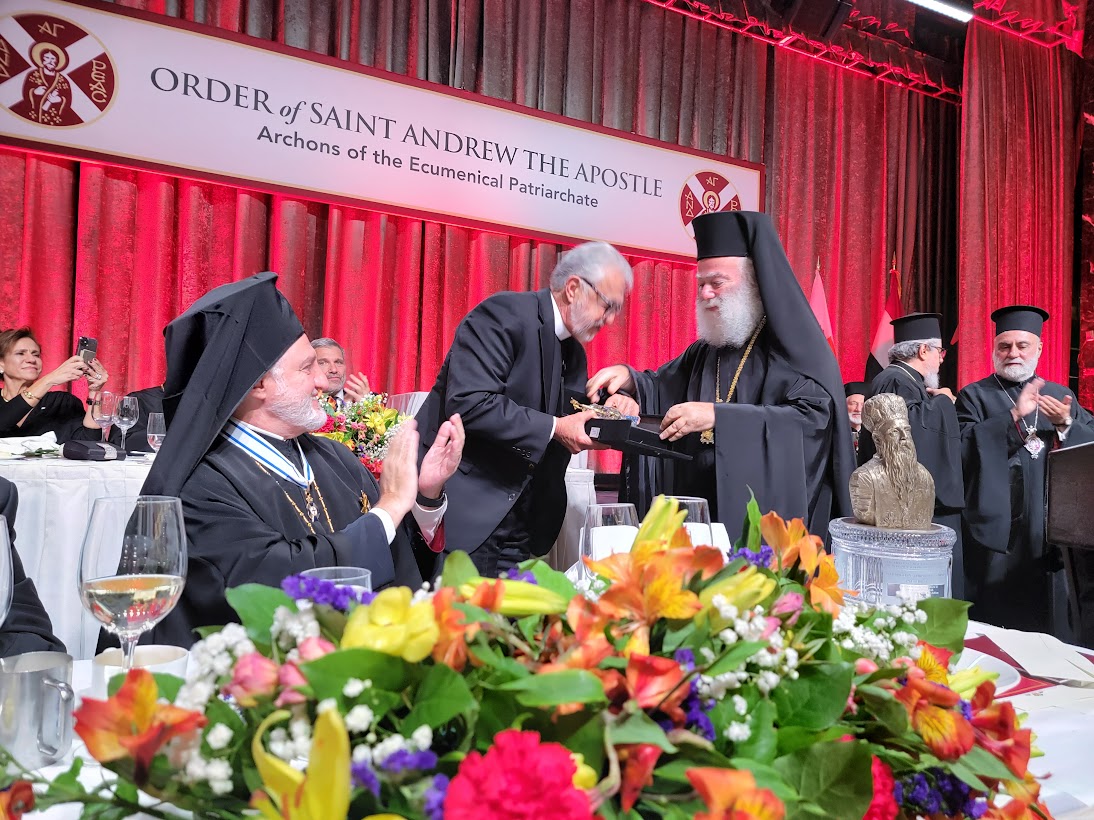 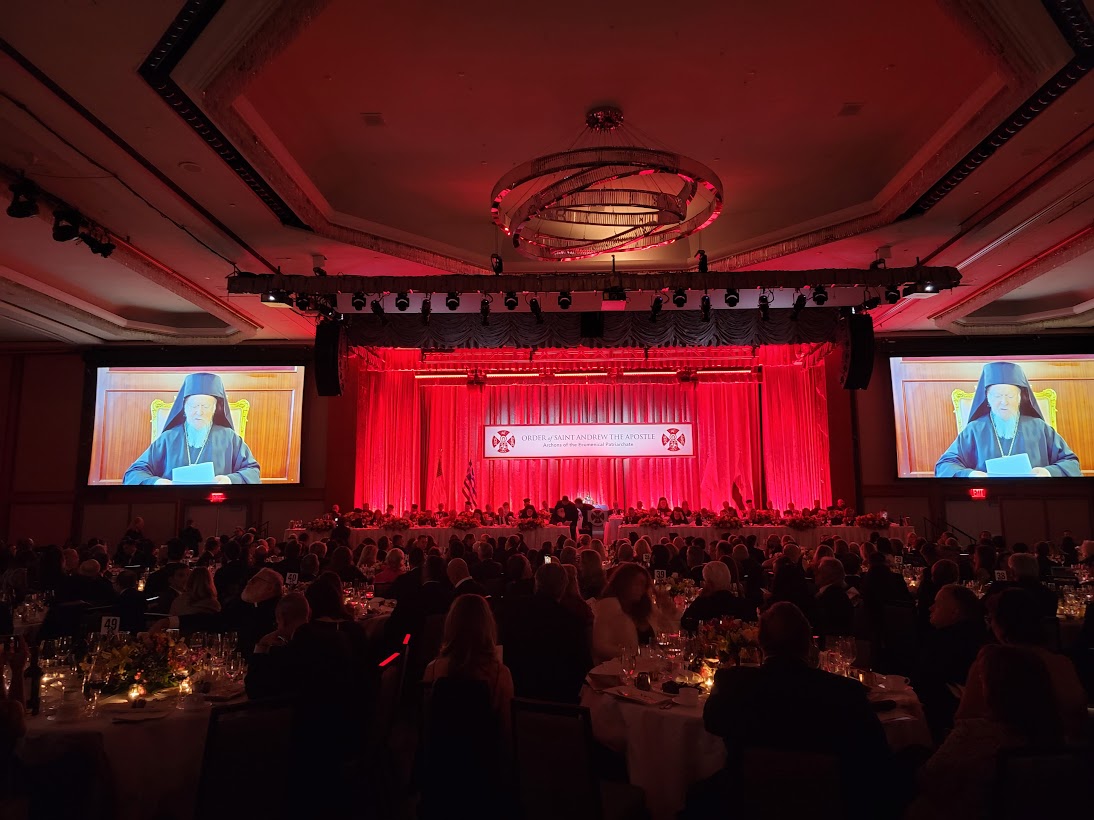 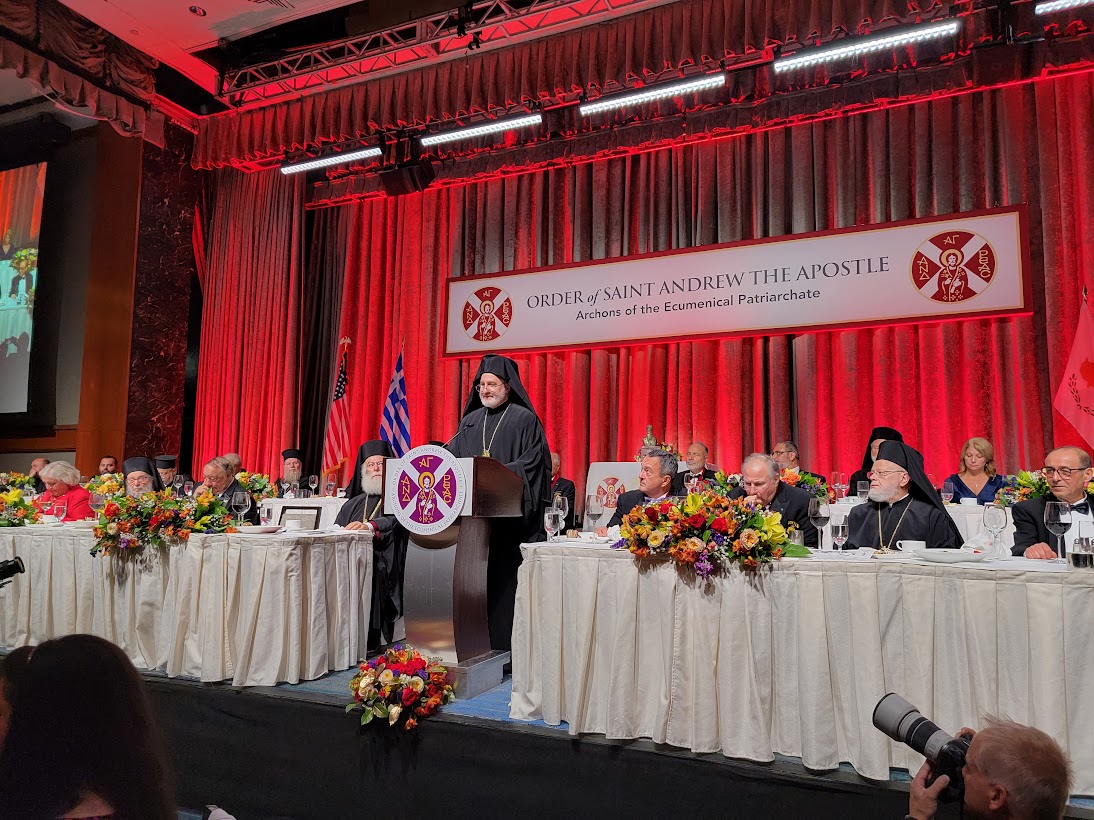 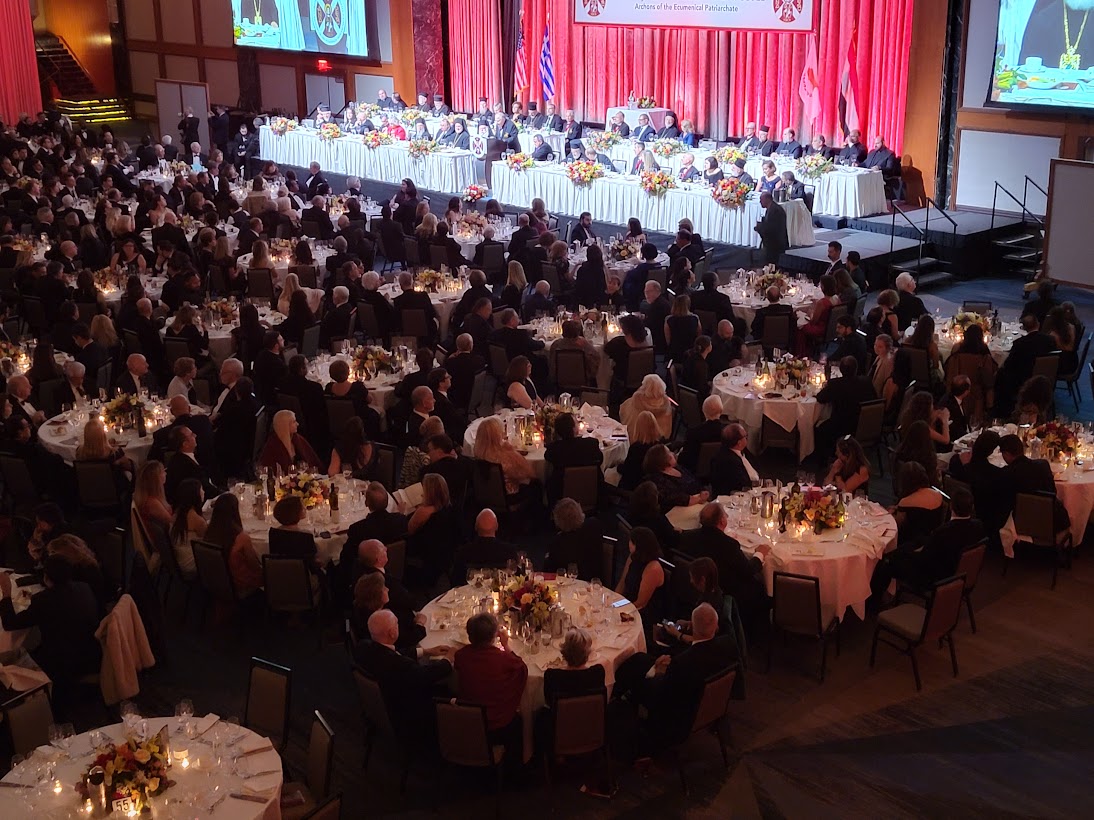 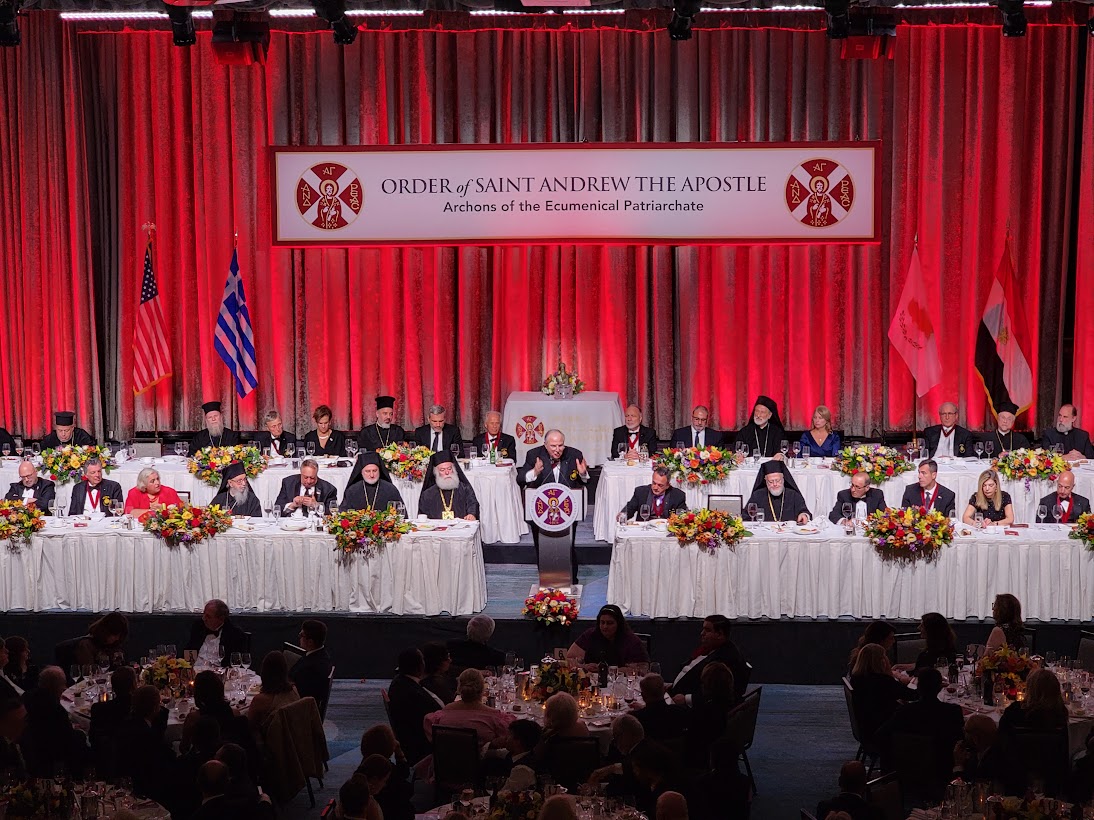 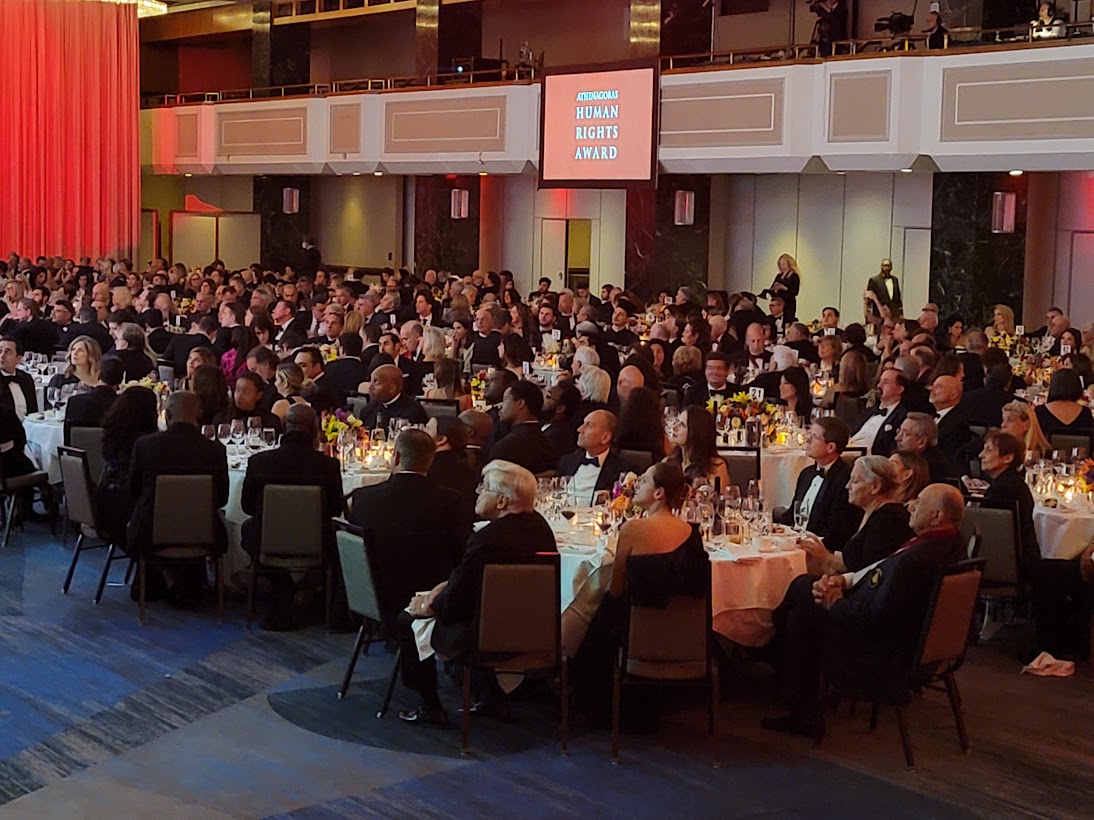 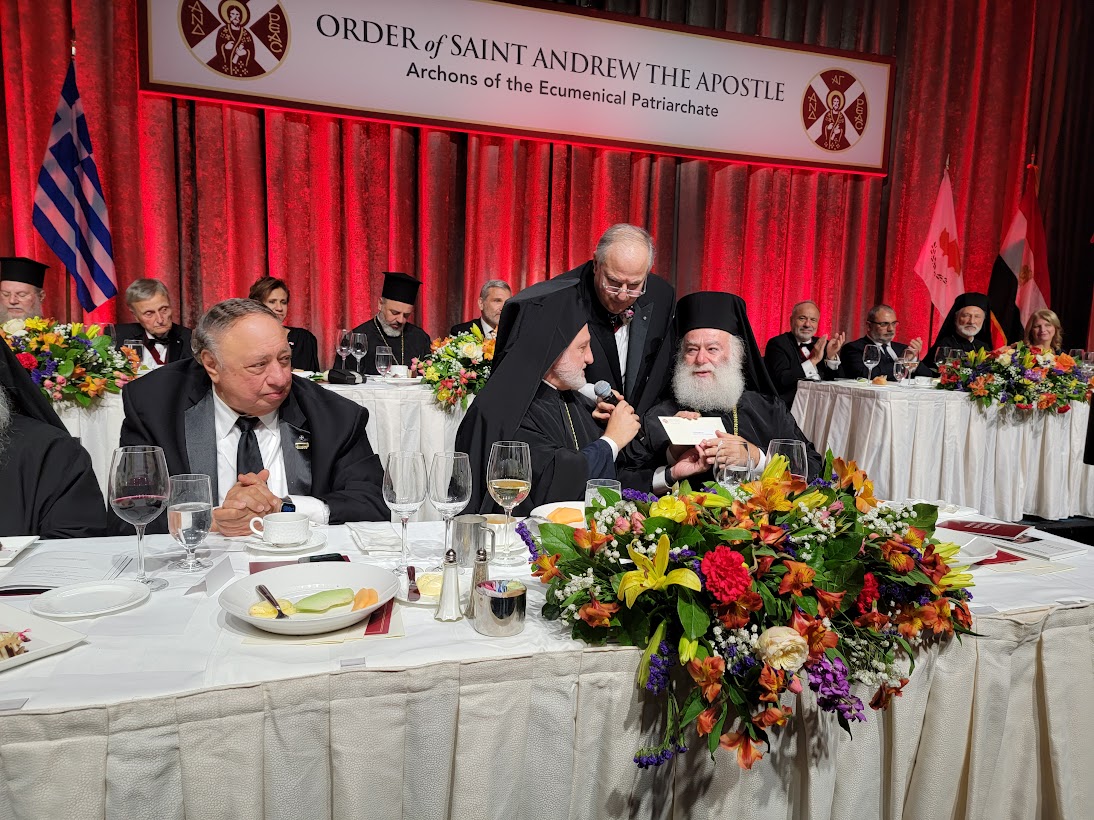 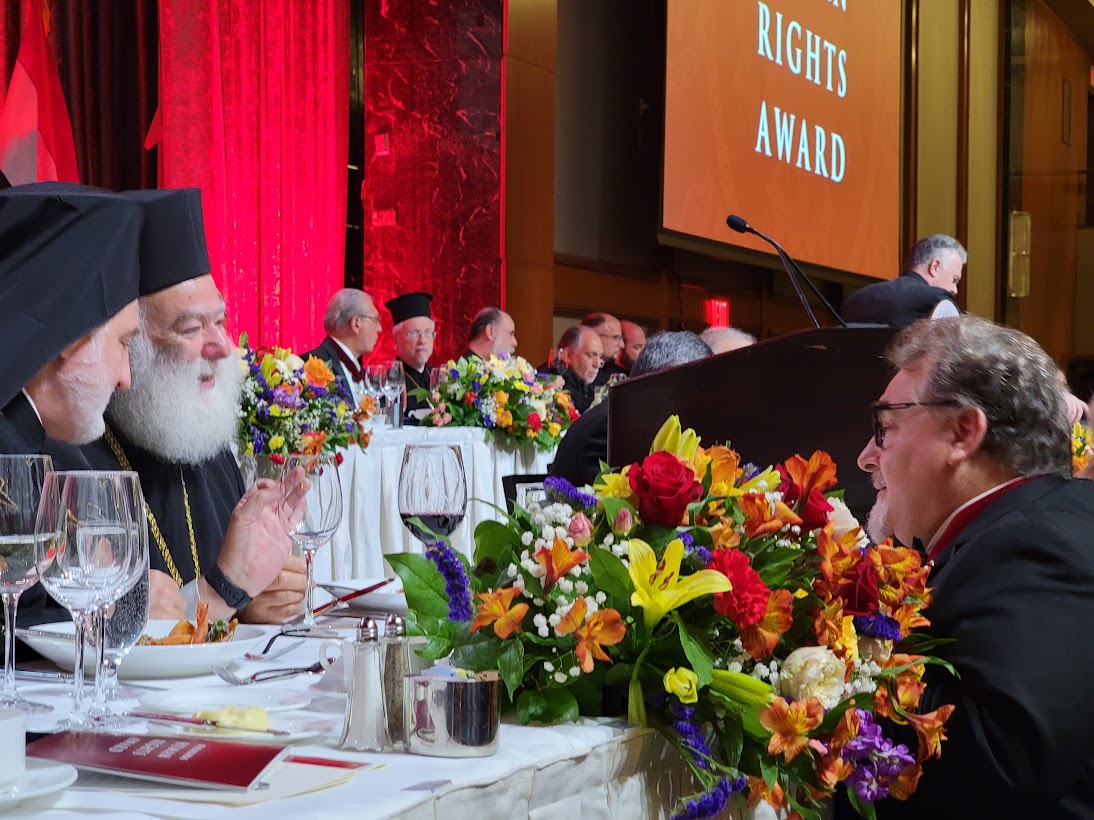 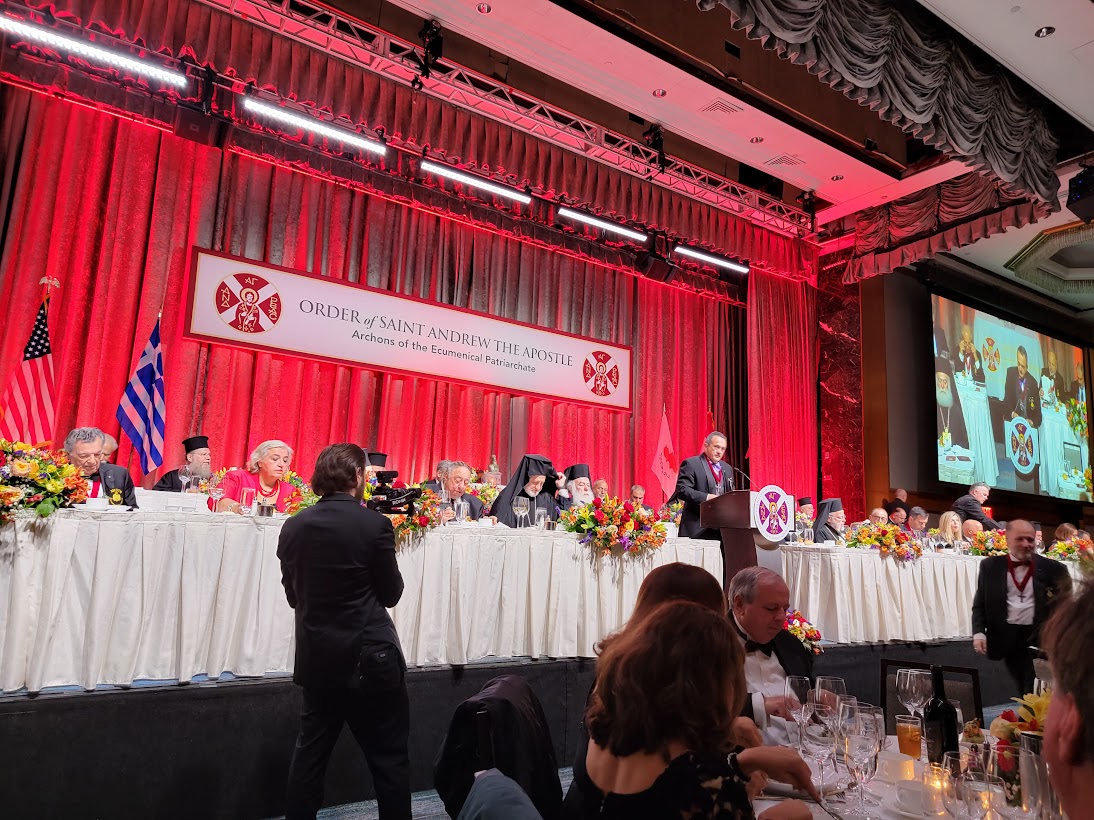 Archbishop of America: Saint Photios the Great was truly a messenger of God

Archbishop of America: We pray for all those affected by the devastating earthquake in Turkey and Syria

Archbishop of America: The spiritual needs of our people must be our chief concern