Archdiocese of Australia raised $ 636,000 for those affected by wildfires in Greece

A sum of $ 636,613.52 was raised from a fundraiser conducted by the Holy Archdiocese of Australia for those affected by the recent devastating wildfires in Greece.

In its announcement, the Holy Archdiocese announced the distribution of this amount of money while the Archbishop of Australia thanked and congratulated all the donors who responded to the fundraising initiative, noting that, despite the adverse conditions in Australia due to the pandemic, “Our people have taken care to keep their hearts open, willing to offer help to their fellow human beings who are most in need.”

Read the full announcement of the Archdiocese of Australia:

$ 636,000 for the fire victims in Greece from the fundraised of the Holy Archdiocese of Australia

The Archdiocese of Australia is pleased to announce that the final amount of money raised by the fundraiser for the victims of the recent devastating wildfires in Greece amounts to $ 636,613.52.

This amount of money will be distributed as follows:

– $ 150,000 for the fires in North Evia are deposited in the Holy Metropolis of Chalkis;

– $ 130,000 for the fires in Varympompi and Thrakomakedones of Attiki are deposited in the Holy Metropolis of Ilion, Acharnes and Petroupolis.

– $ 100,000 for the fires in the region of Messinia are deposited in the Holy Metropolis of Messinia.

– $ 35,000 for the fires in Karpathos are deposited in the Holy Metropolis of Karpathos.

– $ 100,000 for the Institute for the Panhellenic Network of Civil Protection and Crisis Management (volunteers) are deposited in the IDAFK.

– $ 21,613.52 was deposited with individuals who sought direct assistance from the Holy Archdiocese.

Archbishop Makarios of Australia warmly congratulates all those who responded to the call of the Church and contributed from their backwardness to the noble purpose of the fundraiser.

Moreover, in a statement, His Eminence states: “I repeatedly and unceasingly praise the Lord who deemed worthy me to shepherd our blessed people in Australia, who proves at every opportunity his devotion to the principles and values of our Faith and Nation.

This time, in the face of the terrible ordeal that our brothers recently experienced in the fire-stricken areas of Greece, our Greek community reactivated its philanthropic and solidarity reflexes by moving everyone with its participation and generous offer to our Archbishop’s fundraiser.

Our emotion and pride become more intense as we consider that the fundraiser coincided with an extremely difficult period for most of our expatriates, given the deterioration of the pandemic in the most populous states of Australia.

Our expatriates, as well as all the citizens of these areas, were forced to lock themselves in their homes to protect themselves from the virus. Most businesses closed, as did other workplaces.

Most of our churches remained closed to the faithful, which made it difficult for our clergy to communicate with their parishioners. Nevertheless, in spite of such adverse conditions, our people took care to keep their hearts open and they are willing to offer help to their fellow human beings who were most in need.

From the bottom of my heart, I thank and congratulate everyone for their contribution to the fulfilment of this sacred duty of ours towards our brothers who were affected by the fires in the homeland, especially the Greek associations, bodies and organizations, but also all the Parishes/Communities may the righteous God give it back to all and to their families.”

It is pointed out that a detailed list of the donors of the fundraiser and the respective sums of money offered will soon be published on the social media of the Holy Archdiocese of Australia. 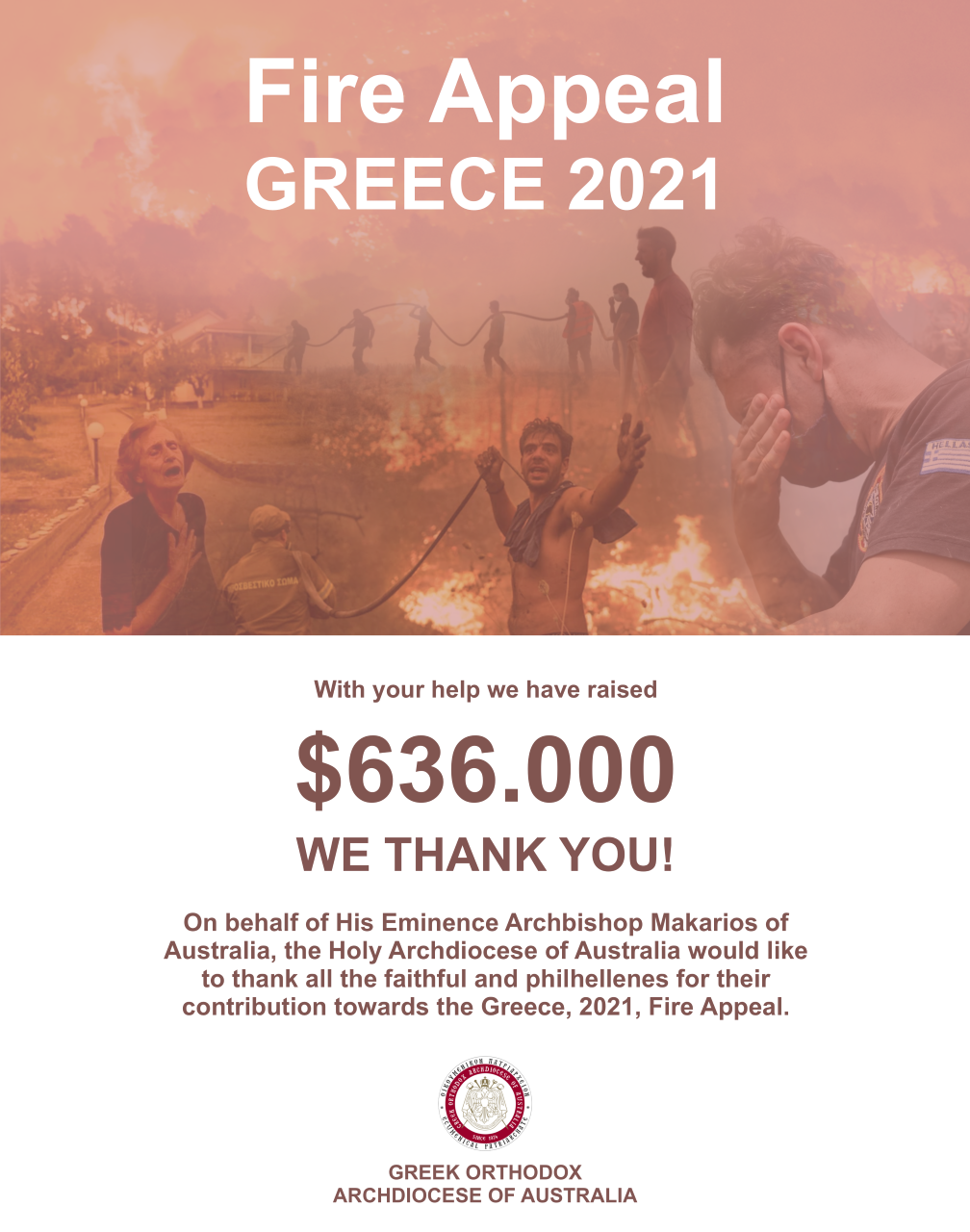 Sunday of the Sower, Synaxis of Holy Physicians were celebrated in Cathedral of St. Stephen in Paris