Archbishop Makarios of Australia, in a letter to the Rector of the Foundation, John Brumby, expressed his frustration and concern about the stated intention to abolish the Greek Studies Program at La Trobe University in Melbourne.

It is noted that the Strategic Plan of the University, which was recently put into consultation, provides for the closure of three study programs, one of which concerns the Greek language, citing the low number of student enrollments, as well as reasons for saving financial resources.

In his letter, Archbishop Makarios urged the University Administration to reconsider the issue, stating his conviction for the viability of the Greek Studies Program and assuring that the Holy Archdiocese of Australia will provide all possible support in this direction.

Introductory, the Archbishop expressed his understanding of the management’s concerns about the financial viability of the program, but hastened to remind that the Greek community in Melbourne and Victoria in general is one of the largest Greek-speaking communities in the Greek diaspora worldwide. As he pointed out, the care for the preservation and continuation of the Greek language, faith and culture is a duty of the Greek Orthodox Church of Australia. In this context, he recalled that the Holy Archdiocese, which is the largest provider of primary and secondary education in the Greek language in Australia, pioneered the establishment of a Greek higher education program in Victoria a few decades ago. “The Greek Studies Program at La Trobe University, the latest of its kind in Victoria, is the fruit of these efforts,” he said. “If this is abolished, then students will not have the opportunity to study Modern Greek at a tertiary educational level anywhere.” in Victoria.

In addition, the Archbishop focused on the fact that La Trobe University is developing in an area of Melbourne with a large population of Greek-Australians, while noting a large part of its student body consisting of Greek-Australians. “The Greek-Australian community and especially its members living in your area have played an extremely positive role in all aspects of the development of the society of Victoria,” he said, adding that the Greek language and culture are important not only to the Greek-Australian community, but to Australian society as a whole. Given this, he emphasized as imperative the need for the Greek language to be offered for studies in the reference community, in its natural environment, so that the obligation of the University to contribute to cultural diversity is not jeopardized.

The Archbishop also considered it premature to take any decision based on the low number of registrations, as, as he reminded, Greek language programs at VCE level are in transition and the changes that will take place from next year are expected to encourage Greek children, but also students from the wider community, to choose to study in the Greek language.

Finally, the Archbishop acknowledged that universities across Australia are facing many financial difficulties, but pointed out that the Holy Archdiocese of Australia urges the Australian Government at all levels, especially the Commonwealth Government, to support the Greek Studies Program at La Trobe University, while it intends to mobilize the Greek-Australian community to work with the University to ensure the viability of the program.

Finally, the Archbishop did not fail to express his love and support to all students, their families and members of the wider community, who are affected by this unfortunate proposal of La Trobe University to abolish the Greek Studies Program.

Follows the letter, in English, sent by Archbishop Makarios of Australia to the Rector of the University, John Brumby: 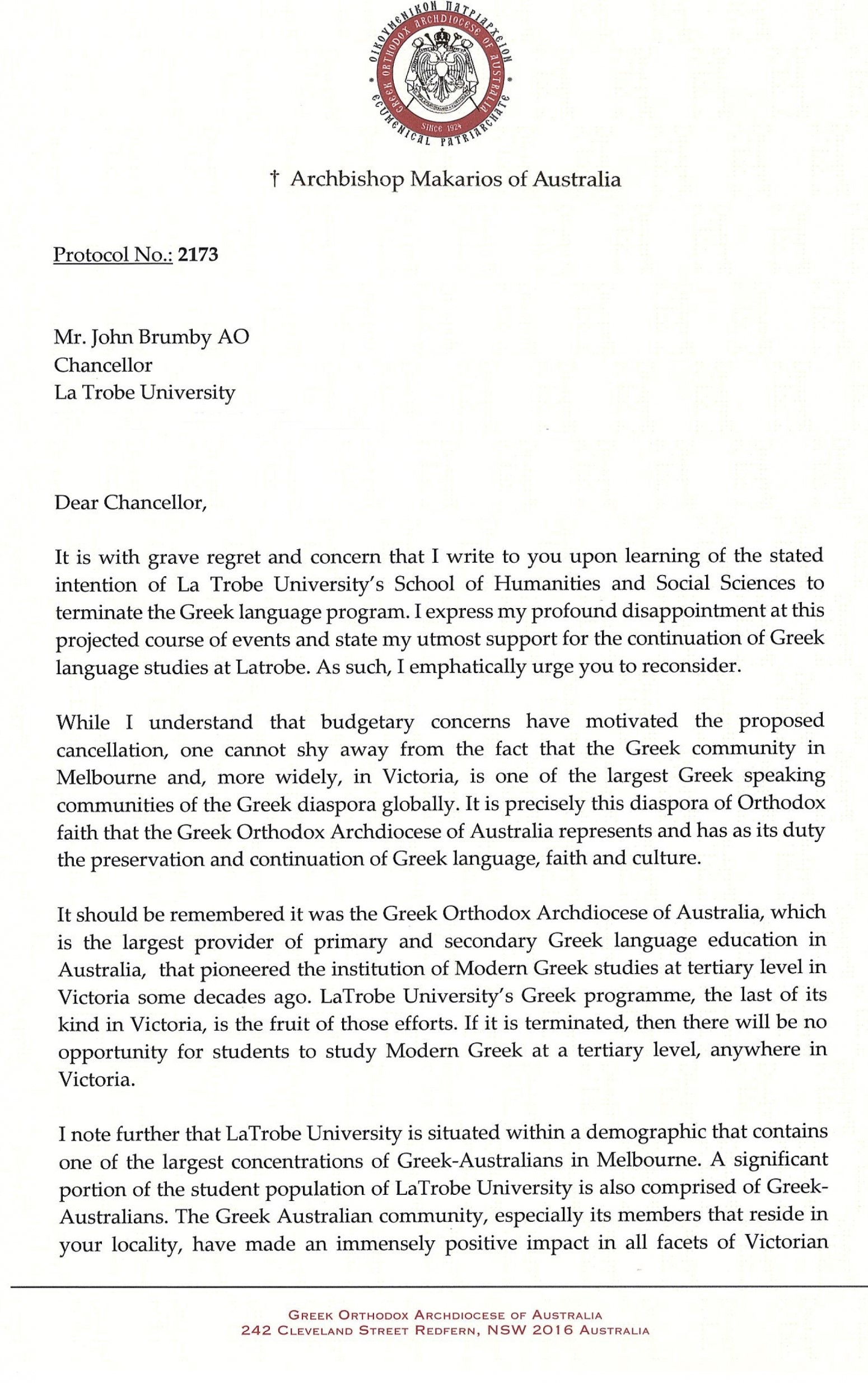 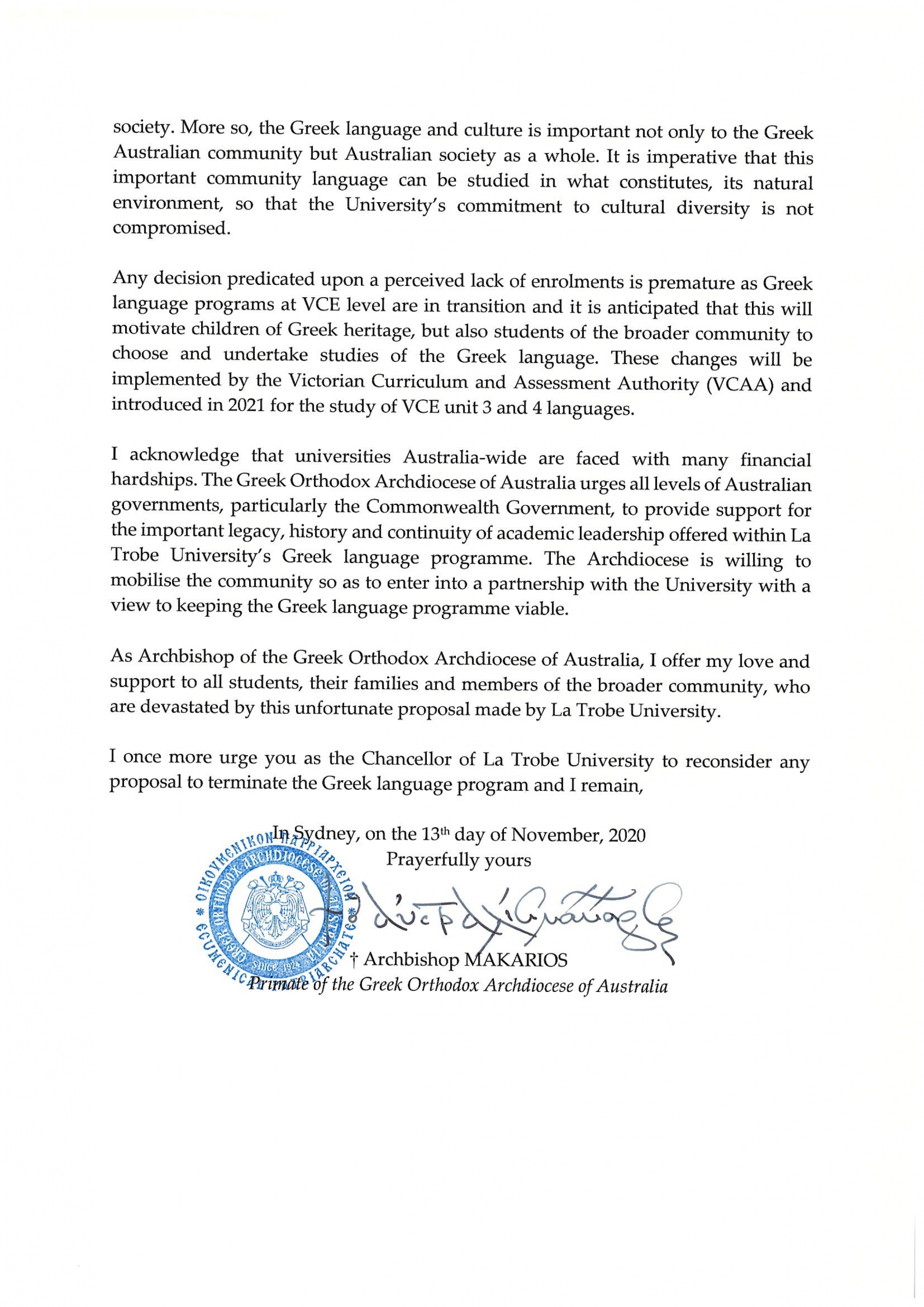 Archbishop of Australia: Greek is a sacred language

Event – Tribute in honor of late Archbishop Stylianos of Australia

Archbishop of Australia: The source of our strength is Jesus Christ

Students sang Christmas carols to the Archbishop of Australia

Metropolitan of Belgium: Religious experience plays a huge role in ensuring wellbeing of our societies

The 15th High-Level Meeting with Religious Leaders took place in an online format, on Friday, 27 November 2020. This...

Ecumenical Patriarch: We thank God that, after the injustice of Halki, He led many new clergy to Constantinople

Ecumenical Patriarch Bartholomew conferred the title of Archimandrite of the Ecumenical Throne on Eleftherios Aloukos, clergyman of the Metropolis...

Ecumenical Patriarch: Do not despair, keep your faith in God

After the Divine Liturgy, Ecumenical Patriarch Bartholomew presided over the memorial service at the Patriarchal Church of Saint Georgios...

Metropolitan Ioannis of Zambia and the Honorary Consul General of Greece in Zambia, Michael Krupnik, traveled to the capital...

On Sunday, November 29, 2020, the Holy Community Cathedral in Addis Ababa celebrates the memory of the patron saint...

The strong earthquake that hit Samos, on October 30, caused the loss of two young people and inflicted extensive...