Following this, Archbishop Elpidophoros spoke at a reception with members of the Salt Lake Interfaith Roundtable and presented Bishop Solis with a cross of the Greek Orthodox Archdiocese of America as a sign of mutual respect and thanksgiving.

Find below the speech of Archbishop Elpidophoros of America:

Thank you for your warm welcome. I truly feel blessed to be among you today and to be for the first time in this wonderful city of Salt Lake City. As I stand in your presence among this diverse group of religious leaders, I cannot help but tell myself how important a type of gathering such as this one is in today’s world. Looking around at each of you here, a simple, yet impactful quote comes to my mind, which is, “Truth does not fear dialogue.” We owe this phrase to His All-Holiness Ecumenical Patriarch Bartholomew.

The word “dialogue,” which is so commonly used to define an exceptionally diverse array of realities, resonates strongly as we come together tonight. Dialogue, in the Orthodox understanding of the word, is essentially and primordially a dialogue between God and humanity, a revelation which is literally “through the Logos,” “through the Word.” As John the Theologian put it in the prologue of his Gospel: “In the beginning was the Word, and the Word was with God, and the Word was God. He was in the beginning with God. All things came into being through him, and without him not one thing came into being. What has come into being in him was life and the life was the light of all people.” (John 1:1–4).

As you may know, in the Christian tradition, dialogue has its roots in the life of the Divine Trinity Itself, revealed to us through the Incarnation of the Logos, the Word, Jesus Christ. In this sense, dialogue becomes the key by which we are called to resolve our divisions, to heal hatred, to foster resilience, to fight against prejudices and bigotry, to promote peace and reconciliation, and finally, to discover the ultimate vocation of our common humanity: to love God and to love our fellow human beings.

Despite the horrors of the 20th century, our understanding of dialogue has become an increasingly central instrument for reconciliation. This move toward reconciliation in our world is evidenced through the Christian engagement in ecumenical dialogue. The Ecumenical Patriarchate in particular has, to a certain extent, proved to be a pioneer alongside other Churches and Christian communities in creating a genuine multilateral institution for the promotion of Christian unity. In the aftermath of the Second World War, the need for a global Christian organization was brought to fruition with the creation of the World Council of Churches in 1948, based on two crucial principals: a true dialogue regarding theological issues, and an acceptance of the need for joint social action.

The Orthodox Church’s involvement in ecumenical dialogue has also depended on the willingness of other Churches to build bridges and not walls. In this regard, a radical and positive turn was taken during the Second Vatican Council, when the Catholic Church decided on the fundamental necessity of a rapprochement between Christians, and especially with the Orthodox Church. One of the most important events to emerge from that decision was, without a doubt, the meeting in Jerusalem of Pope Paul VI and Ecumenical Patriarch Athenagoras in January of 1964. One year later, in a very prophetic gesture, the same two global leaders decided in common — as a visible sign of their desire to restore the bond of Eucharistic communion that had been lost for centuries — to simultaneously lift the anathemas of 1054, establishing the foundation for the bridge that we are continuing to design and building upon into the present age and beyond. Their dialogue of charity became a dialogue of truth with the creation of an official theological dialogue between the two Sister Churches in 1979. Since then, the many ties and ecumenical bonds that bring Christians closer together are plenty in the witness of our common desire for a renewed unity in communion. I am convinced this desire is shared by His Holiness Pope Francis and His All-Holiness Ecumenical Patriarch Bartholomew, as they have so manifested numerous times in past statements and meetings.

But dialogue is also important among faith traditions. In the Encyclical of the Holy and Great Council of the Orthodox Church convened in 2016, one reads that, “Honest interfaith dialogue contributes to the development of mutual trust and to the promotion of peace and reconciliation. The Church strives to make ‘the peace from on high’ more tangibly felt on earth. True peace is not achieved by force of arms, but only through love that ‘does not seek its own’ (1 Cor 13.5). The oil of faith must be used to soothe and heal the wounds of others, not to rekindle new fires of hatred.” (par. 17)

Interfaith dialogue is before all about human dignity, peace, and coexistence. For the Orthodox Church, interfaith dialogue is rooted in the exposure of Orthodoxy itself to religiously pluralist environments. The inter-religious experience among communities, past and present, is powerfully linked to the church’s coexistence with religious actors and communities of diverse sensitivities and traditions, for it is experienced by all in our daily lives. This is true for all of us today. However, we have seen some very strong reactions against interfaith dialogue. The rise of religious extremism is a phenomenon that cuts across all religious traditions with commonalities such as self-isolation and insularity that latch onto specific traditions and masquerade themselves as authentic. Extremism and radicalization seek to privatize the truth by promoting an ethos of mutual exclusivity. On the contrary, we try — in faithfulness to our respective faith traditions — to promote the creation of bridges respectful of others’ beliefs. A recent document entitled, For the Life of the World. Toward a Social Ethos of the Orthodox Church, reminds us that “The Orthodox Church approaches inter-religious dialogue in full recognition of the real differences between traditions, but firmly insists nonetheless on the real possibility of peaceful coexistence and cooperation among different faiths. Above all, it seeks to overcome ignorance, hostility, and fear with reciprocal comprehension and the peace of true friendship.” (par.59) In like manner, we are called here tonight and beyond this night to act on these assertions and come closer to living in harmony with one another.

Allow me to thank you once again for your very warm welcome. I pray wholeheartedly that you continue to cultivate an ethos of dialogue and reconciliation seeing and acknowledging the presence of God everywhere, a presence that shines forth in all places, and especially when we come together in a spirit of love and respect. 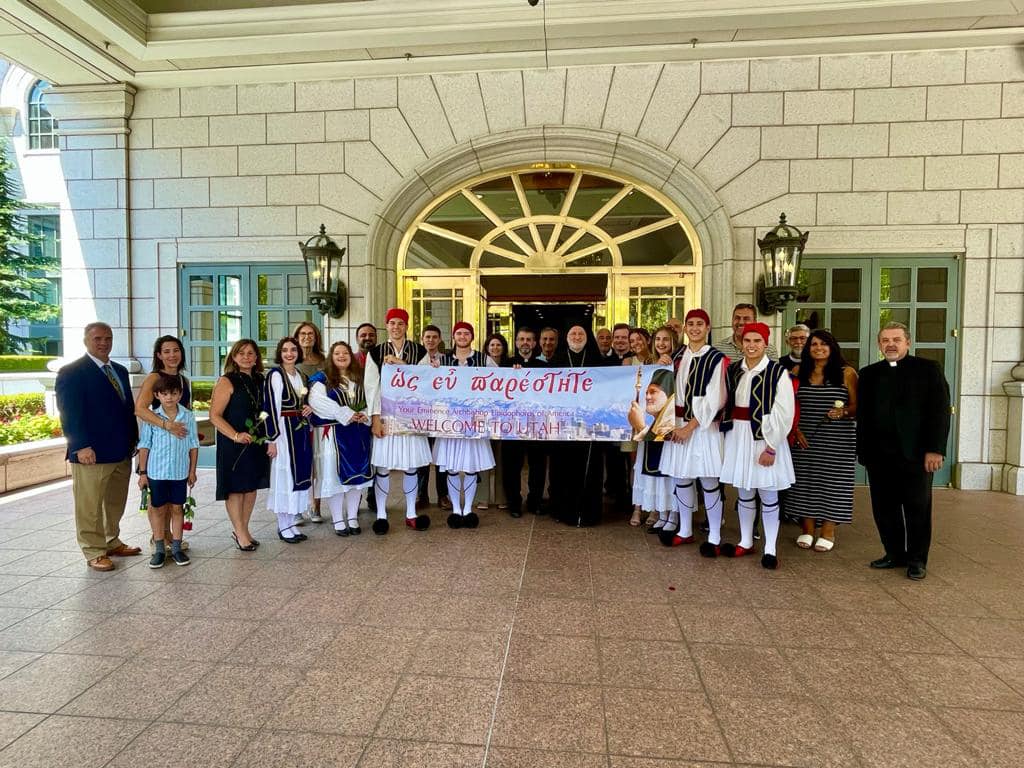 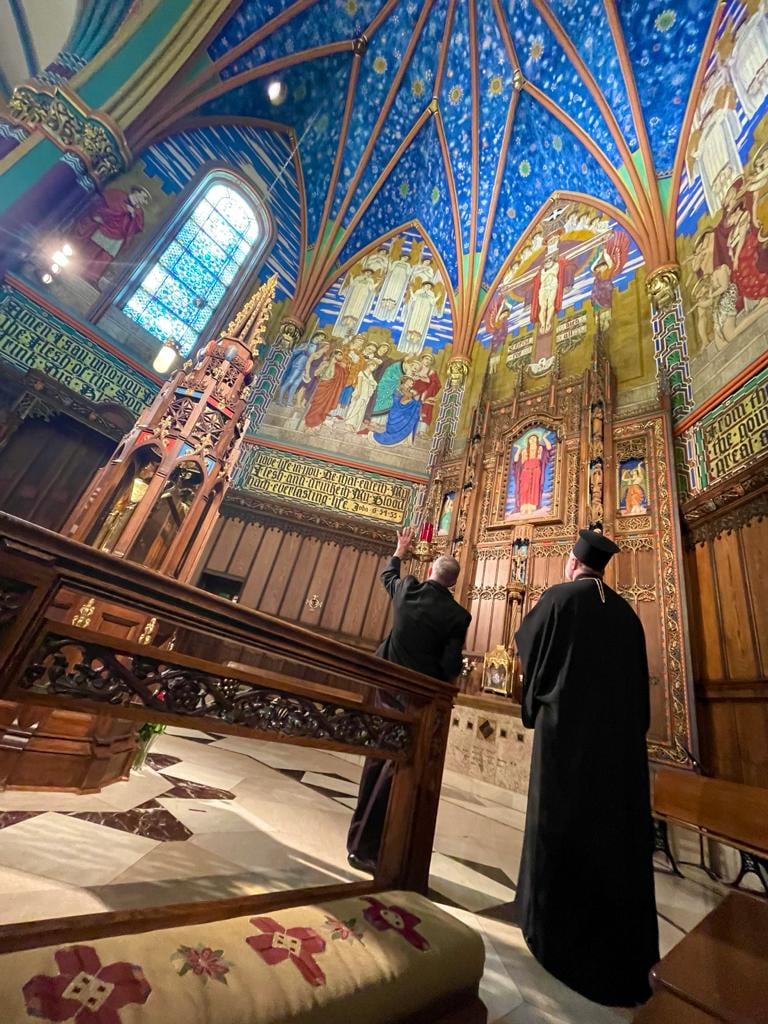 Archbishop of America: God, shower Your blessings upon new US President and Vice President (Video) (Upd)

Archbishop of America: I ask you to have patience and goodwill

Trump: Greeks never give up and keep faith in the blessings of Almighty God