Archbishop of America: Grateful to restart construction at St. Nicholas at Ground Zero

Archbishop Elpidophoros of America performed the sanctification service, which marked the beginning of the construction of St. Nicholas Greek Orthodox Church at Ground Zero in New York, a church that was destroyed on the 11th of September 2001, after the terrorist attack on the Twin Towers.

Archbishop Elpidophoros performed the service in a ceremony attended by several members of the Greek community, as well as the Governor of New York, Andrew Cuomo.

I was honored to stand with New York Governor Andrew Cuomo at the re-starting of construction at Saint Nicholas National Shrine.

In his remarks, Archbishop Elpidophoros of America stated, “Nearly twenty years ago, our Saint Nicholas fell with thousands of our fellow human beings lost in the ashes of 9/11, and countless others wounded in body, heart, and soul by a savage act of hatred and terror. We cannot, we must not, and we shall not let this stand. We are going to open the Saint Nicholas Church and National Shrine as a sign of love, not hate; a sign of reconciliation, not of prejudice; and a sign of the ideals that exist in this great American Nation, where one’s religious liberty and freedom of conscience never excludes, but only embraces.”

The Archbishop blessed the construction workers, praying that God might “protect the workers who have returned to this holy place to rebuild in safety and peace. Guide their hands aright, shield their eyes from harm, grant unto them and all who contribute to this Holy Work every blessing of body and soul.”
Governor Cuomo stated, “In the face of tragedy and destruction on 9/11, the St. Nicholas community literally held its ground against what was an inconceivable tragedy inspired by hate, instead relying on the power of love to restore what was lost and create a symbolism of faith and tolerance.”

Governor Cuomo continued, “In New York, we know from experience that rebuilding after a crisis means more than just restoring bricks and mortar or reviving an economy; it also requires healing a broken spirit. This church helps achieve that healing, and it will be a national shrine, rising on a place made sacred by the suffering that took place here and will send a powerful message to the world that New York is a state made stronger by tolerance and our respect for one another.”

Rick Cotton, Executive Director of the Port Authority said, “Today marks a new chapter in the historic rebuild of Lower Manhattan. The new St. Nicholas Church and National Shrine will be a source of inspiration and peace, while also helping to share the historical contributions of the Greek-Orthodox community to all who visit and worship. The Port Authority is proud to have worked alongside Governor Cuomo to bring us to this important milestone and today, we are pleased to see construction resume. I commend the work of the Archdiocese and Friends of St. Nicholas as they have worked hard to ensure that this project honors the strength and resolve of our World Trade Center Campus.”

Kevin J. O’Toole, Chairman of the Port Authority said, “In a world filled with so much uncertainty, this restart brings hope that we are closer to restoring St. Nicholas as a solemn place for parishioners and visitors to worship, reflect, and honor the innumerable sacrifices made after the September 11th attacks. The church is a symbol of the continued resilience that has helped bring a rebirth to the World Trade Center campus, and today is a day to recognize those hard-fought achievements.”

The election of Archbishop Elpidophoros in May 2019 reset the stage for a new, transparent approach to complete the Saint Nicholas reconstruction, which had been abruptly halted in December 2017 due to a series of managerial and financial crises in the Archdiocese. With the encouragement of Governor Cuomo, the non-profit Friends of St. Nicholas was formed to oversee the project.

This group of prominent Greek Orthodox Christians, under the guidance of Archbishop Elpidophoros and Fr. Alexander Karloutsos, and the leadership of Dennis Mehiel, Michael Psaros and John Catsimatidis, raised the funds required to complete the construction of the Church and National Shrine.

At the conclusion of the event, Archbishop Elpidophoros, Governor Cuomo and those in attendance at the event observed the placement of the first skylight in the dome of the Church. Dennis Mehiel, Chairman of the Friends of St. Nicholas, remarked, “We have just witnessed the placement of the first piece of glass that what will eventually become a beacon of light at Ground Zero, shining brightly as a symbol of good versus evil and providing a peaceful and prayerful place for people of all faiths who visit the 9/11 Memorial.”

Also, the Archbishop in a message via his personal twitter account, stated, “Grateful to restart construction at St. Nicholas at Ground Zero with Governor Cuomo. This National Shrine will be a symbol of love, of reconciliation, and a sign of the ideals of religious liberty and freedom of conscience that never excludes, but only embraces.”

Grateful to restart construction at St. Nicholas at Ground Zero with @NYGovCuomo. This National Shrine will be a symbol of love, of reconciliation, and a sign of the ideals of religious liberty and freedom of conscience that never excludes, but only embraces. pic.twitter.com/cwxklQvUxt

Also, in his message to the faithful in the Saint Nicholas National Shrine July Newsletter, the Archbishop of America links St. Nicholas with Hagia Sophia:

I write to you in these heavy days, when our precious Hagia Sophia has been seized for re-conversion to a mosque. I want to remind all of you that the inspiration for the design of Saint Nicholas came from Hagia Sophia, as you can see by the wonderful series of watercolour sketches made by the architect, Santiago Calatrava.

Deeply moved by the magnificent icon over the south door in the Vestibule, which portrays the Emperors Constantine offering the City and Justinian offering Hagia Sophia to the Theotokos and Divine Child, the architect marvellously morphed the image of the Holy Mother into the design of the Church. And to solidify this connection with Hagia Sophia, the dome of Saint Nicholas will have forty ribs, as does the dome of the Hagia Sophia, a living reminder of the Great Church for all the world to see.

This artistic connection is also a spiritual one as well. Even as Hagia Sophia is manipulated to satisfy shortsighted exclusionary objectives of ‘glory’ and dominance, the Saint Nicholas National Shrine and Church will become an open and inclusive witness of what is best in all human aspirations for the Divine. For a thousand years, Hagia Sophia was the largest edifice – religious or otherwise – in the world. Saint Nicholas will be as large, but not physically. 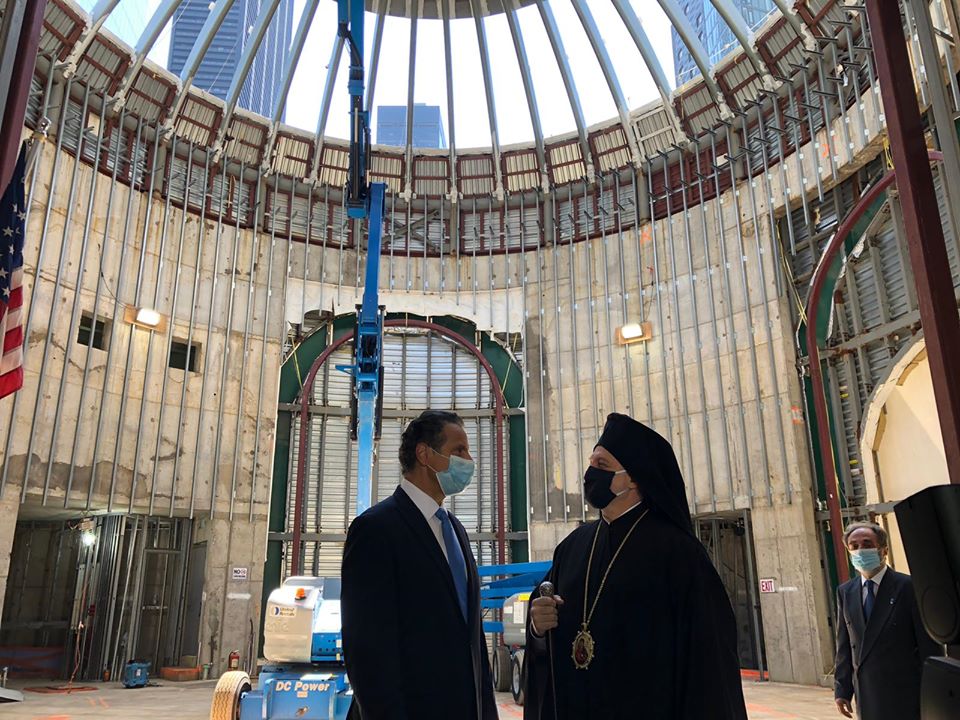 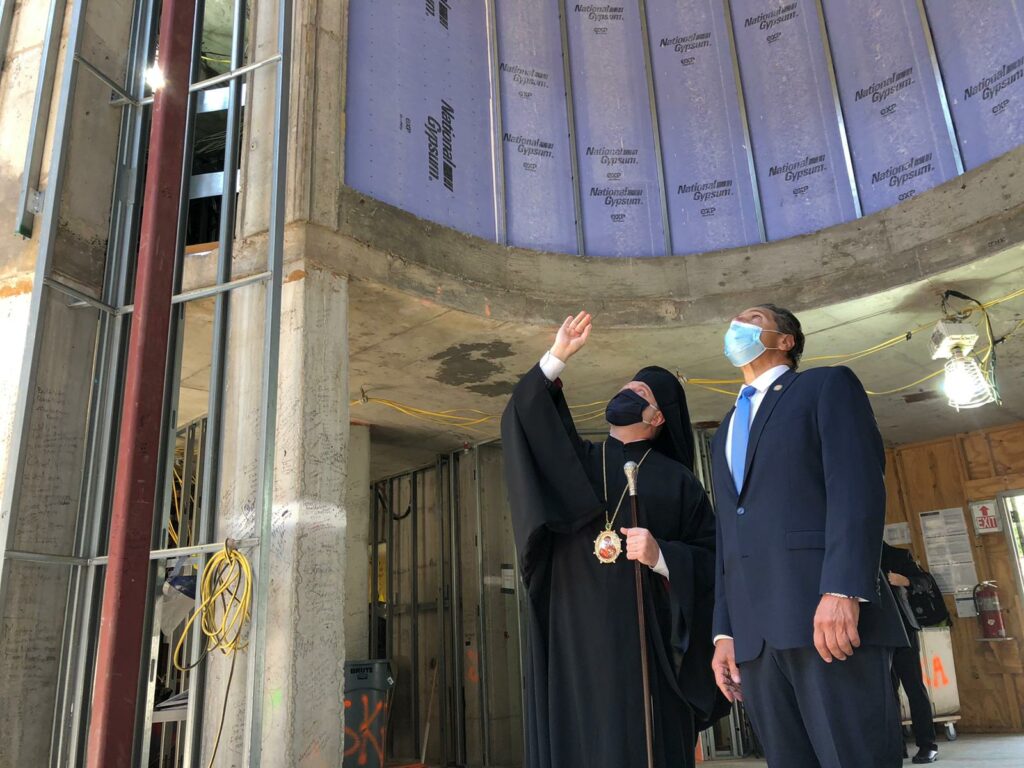 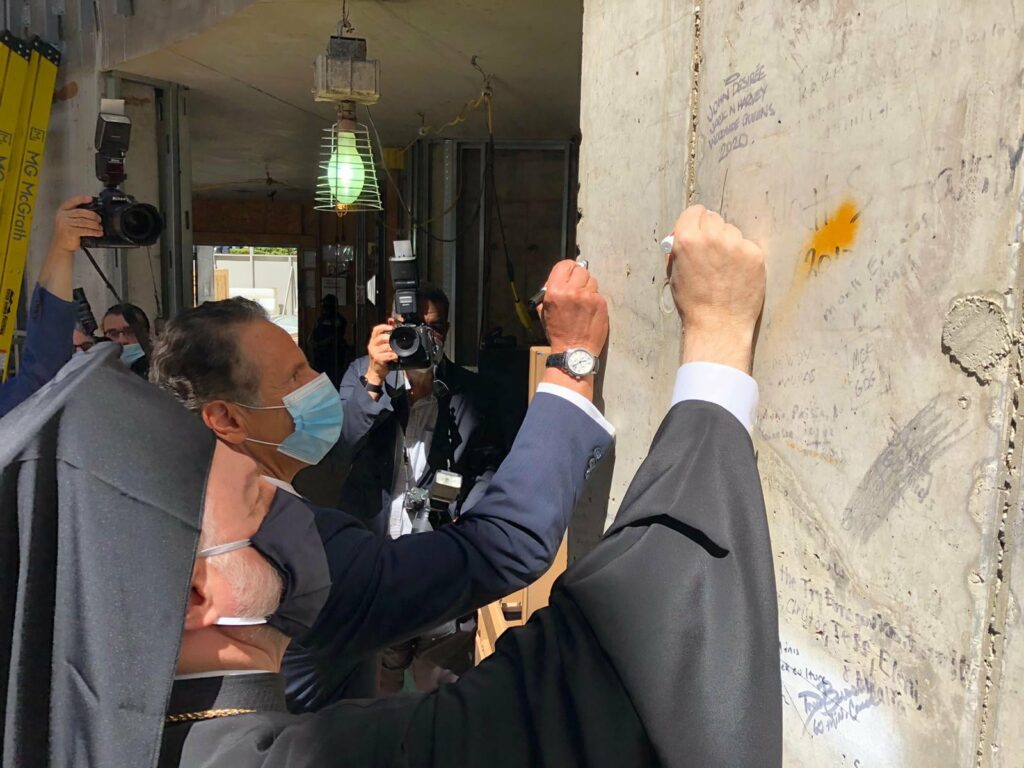 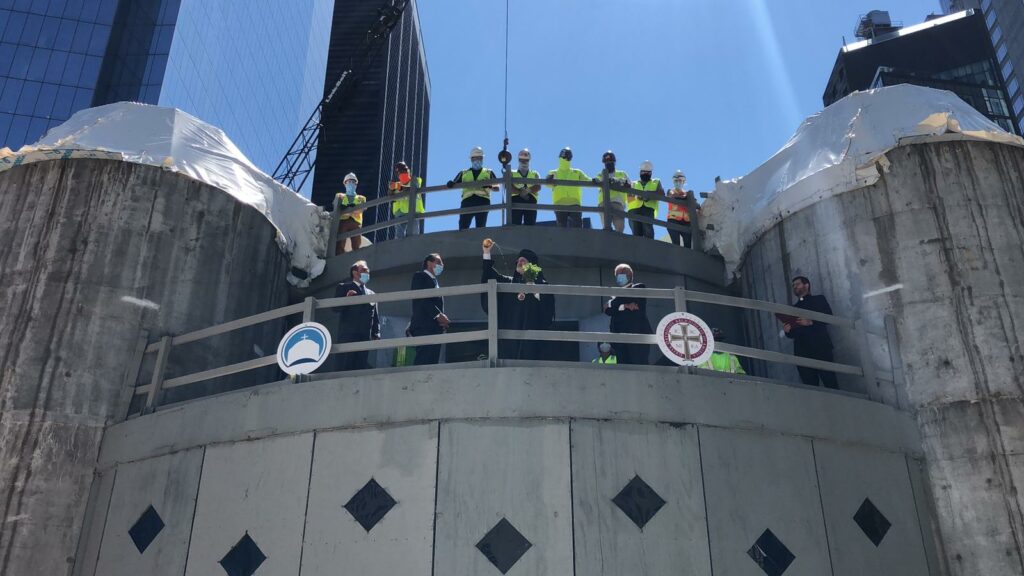 Ordination of Deacon Sotiri Michalatos by Archbishop of America

Metropolitan of New Jersey: May we always keep the Cross at forefront of our spiritual lives

Archbishop Elpidophoros: We are building Saint Nicholas for those who perished on 9/11

Archbishop of America: Let no one doubt the resolve of the Archdiocese to correct the mistakes of the past

Archbishop of America: Turkish people do not deserve such a narrow-minded policy

Archbishop of America: We have to fight injustice, inequality and hatred

Infectious Diseases Specialist: No procession will be held on Feast of Dormition of Mother of God this year

Ordination of Deacon Sotiri Michalatos by Archbishop of America

Archbishop Elpidophoros of America ordained today Deacon Sotiri Michalatos to the Holy Priesthood at the Archdiocesan Cathedral of the...

Feast of Panagia Myrtidiotissa was celebrated in Wangaratta, Victoria

On the Forefeast and the Feast of Panagia Myrtidiotissa, the Archiepiscopal Vicar of Northcote, Archimandrite Evmenios Vassilopoulos, officiated the...

Metropolitan Kyrillos of Imbros and Tenedos paid a visit to his compatriots living in Northern Greece for the first...